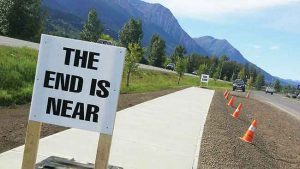 When North Central held its 50th anniversary celebration and grand opening on August 27th, the company had fun on its paved straightaway.

A lonely stretch of sidewalk located across the road from North Central Plumbing and Heating in Smithers, BC

made national headlines in late August, drawing attention to the company and scrutiny to a local bylaw.

North Central, which is celebrating its 50th anniversary this year, moved from its original 6,500 sq. ft. location in the town centre to a new 10,000 sq. ft. space in a light industrial area along the highway.

As part of an infrastructure bylaw, the company was required to build a $10,000 sidewalk that is 100 feet long. However, there is no sidewalk anywhere to the south of their location, and the next sidewalk north is half a kilometer away.

“The funny thing is, even that sidewalk is not complete,” notes Bruintjes. A vast 500-metre expanse leads to North Central’s 100-foot section, affectionately referred to as the ‘sidewalk to nowhere.’

When North Central held its 50th anniversary celebration and grand opening on August 27th, the company had fun on its paved straightaway.

“The local radio station that was on location during the grand opening had some tickets to give away, so we thought that the first few people who showed up and wanted the tickets could have a [foot]race on our sidewalk,” says Bruintjes. “I couldn’t ask for better exposure for our new location than a weird little sidewalk to point the way. Pretty much everybody in British Columbia knows where my sidewalk to nowhere is,” adds Bruintjes.

The company’s sidewalk issue became a topic of discussion at a town hall meeting following their event. According to Bruintjes, a number of local developers and contractors attended the meeting, and business owners in attendance stated they had not built in Smithers because the development costs were so prohibitive.

“There was talk that the town may connect my sidewalk, or find dollars to make my sidewalk less ridiculous by adding sidewalk to it next year. But of course they’re going to have to go to some sort of a vote to get that done,” laughs Bruintjes.