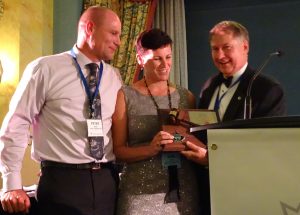 The Canadian Institute of Plumbing and

At the meeting, Weil-McLain Canada’s Bill Palamar was named the incoming chairman of CIPH. Palamar thanked board and committee members for their efforts, as well as his wife and daughter who were in attendance, in his first speech as chair.

Palamar takes the place of outgoing chair Siân Smith, who will now serve as CIPH treasurer. “Being your chairman this year has been one of the highlights of my career so far,” Smith said. 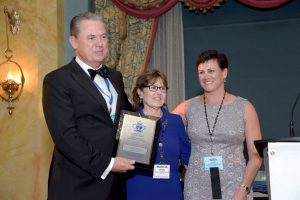 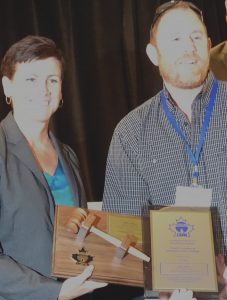 YES award recipient Mike Miller of Taco Canada with Sian Smith, who is holding the gavel plaque for the outgoing CHC chair. Miller handed over the reins of CHC to incoming chair David Hughes.

The three-day business conference featured multiple presenters who talked about leadership in business, and predicted economic and technological trends within the industry. John Rossman, author of The Amazon Way, digital strategy and execution, managing director at Alvarez and Marsel and keynote speaker, discussed the benefits of becoming “customer obsessed,” and the importance of simplicity. “Work hard towards simplicity – simplify the worst customer experience,” he suggested, as some businesses can get tied down with unnecessary complexity.

Brian Beaulieu, CEO of the Institute for Trend Research Economics, told attendees that, “the world is positively getting better.” He explained that employment is on the rise in Canada and noted that the heating and plumbing industries have great potential due to environmental and technological innovations.

The conference also included a luncheon led by Stephanie Martin, building inspector at Alberta Municipal Affairs. She talked about some alterations to the Safety Codes Act in Alberta.

On a lighter note, the ABC event also featured a presentation on Canadian birds of prey and offered guests a western country night. The 2017 CIPH ABC will be held June 25 to 27 in Ottawa, ON.