Building permit spending up in September

Following four consecutive quarters of decline, the value of building permits jumped 16.5% in the third quarter of 2020, almost returning to levels observed in the fourth quarter of 2019. 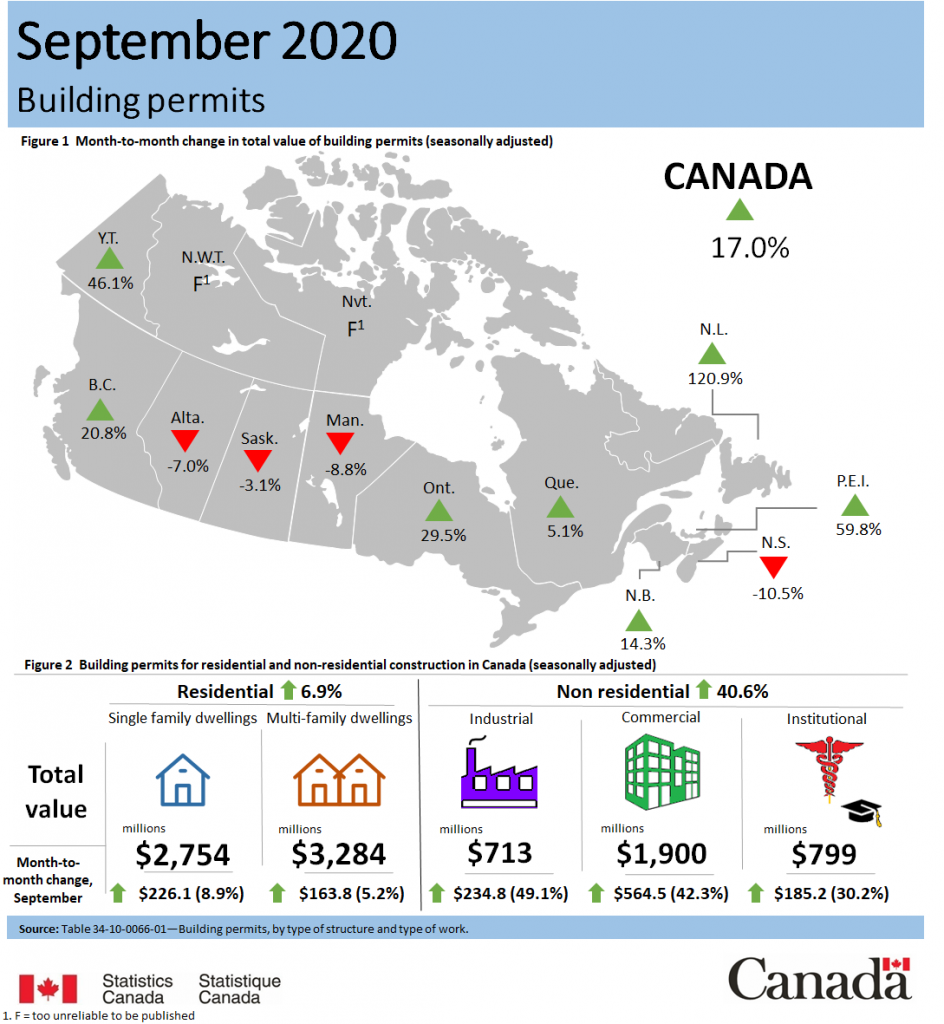 All areas in the building construction sector across Canada saw gains in the total value of building permits issued in September 2020 over the previous month, the the total spending rising 17% to $9.4 billion.

Over three-quarters of the growth came from permits issued in Ontario. With COVID-19 cases rising in many regions in September, some municipalities reported that builders have begun to submit applications earlier as a precaution against potential shutdowns.

The total value of residential permits issued in September, including single family and multi-family dwellings, increased 6.9% to $6 billion.

The value of permits issued for single family homes rose 8.9% to $2.8 billion in September, again led by Ontario (+18.0%). This was the fifth consecutive monthly gain reported in the province, outweighing the declines posted in six other provinces.

Five provinces reported an increase in the value of permits issued for multi-family dwellings, lifting the national total by 5.2% to $3.3 billion. British Columbia (+49.1%), after two months of decline, led the nation in growth in this component.

Month-to-month change in the value of residential building permits 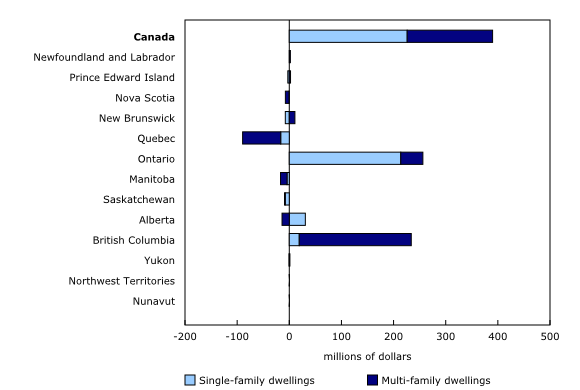 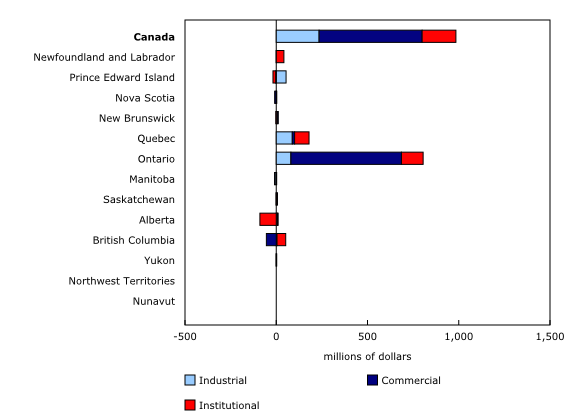 The total value of non-residential (institutional, commercial and industrial) permits was up 40.6% to $3.4 billion in September over the previous month, mostly attributable to large projects in Ontario (+$805 million).

Additional permits for Project Python in the city of Ottawa and the Breithaupt Block office building in the city of Kitchener, contributed to a 42.3% rise in the value of commercial permits nationally, increasing the total to $1.9 billion.

The value of permits issued for industrial buildings rose in eight provinces, breaking the downward trend observed over the previous three months. Permits issued in Quebec, Ontario and Prince Edward Island drove the increase of 49.1% to $713 million nationally.

Following two months of declines, the value of institutional permits expanded by 30.2% to $799 million. A $130 million permit issued for major renovations to the Centre Hospitalier Universitaire de Sherbrooke in Quebec and several permits issued for the new construction of nursing homes and senior citizen homes in Ontario contributed to the increase in this total.

Quarterly levels near those observed in the fourth quarter of 2019

Following four consecutive quarters of decline, the value of building permits jumped 16.5% in the third quarter of 2020, almost returning to levels observed in the fourth quarter of 2019. This was the largest gain since the fourth quarter of 2009 when the economy was recovering from the 2008 financial crisis, and possibly reflected the issuance of permits previously delayed as a result of COVID-19.

All sectors posted gains in the value of permits issued in the third quarter of 2020, with the residential sector soaring to record levels. Residential permits rose 16.8% to $16.9 billion, the highest level since the start of the modern series which dates back to 2002.

Multi-family dwellings drove this upward movement, climbing back to just under the $9.4 billion peak reached in the second quarter of 2019.

In recent years, permits for single family homes have been declining slightly, but in the third quarter, they jumped 36.7% to levels not seen since the first quarter of 2018. As teleworking has become the new normal for many people during the pandemic, the desire for more space may be shifting consumer demand towards single family homes.