Commercial permits surged 28.7% to $1.9 billion in April thanks to a $97 million permit for the Sick Kids patient support centre in the city of Toronto. 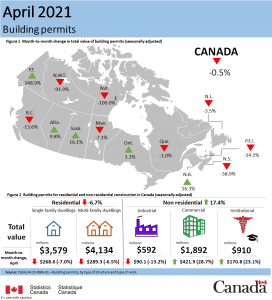 Statistics Canada has announced building permits remained at a historic level through April 2021, edging down 0.5% to $11.1 billion, following the record set in March.

On a constant dollar basis, building permits were largely unchanged.

The residential sector saw the value of building permits fall 6.7% to $7.7 billion in April. Despite the decrease, this was the second highest value on record. British Columbia (-23.7%) and Quebec (-14.9%) accounted for most of this decline.

The value of building permits for multi-family homes dropped 6.5% to $4.1 billion. Gains in Ontario and Alberta were not enough to offset decreases in British Columbia and Quebec.

Eight provinces reported a decline in the value of permits issued for single-family dwellings, with the national total down 7.0% to $3.6 billion, mainly as a result of fewer new projects in Ontario and Quebec.

Overall, the value of building permits in the non-residential sector climbed 17.4% to $3.4 billion.