Canada Leads the G7 for the Most Educated Workforce, but is Experiencing Significant Losses in Apprenticeship Certificate Holders in Key Trades 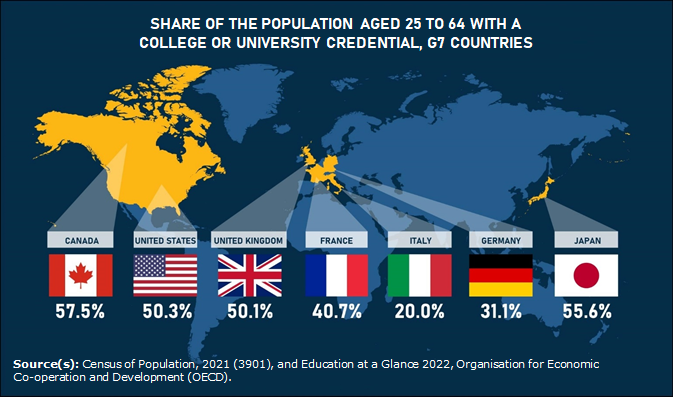 A new study produced by Statistics Canada shows Canada has a larger share of the population with a college or university credential than any other country in the G7. The share with a bachelor’s degree or higher continues to rise with an influx of highly educated immigrants and a growing number of young adults completing degrees.

Moreover, Canada faces a labour crunch, with high employment, record-low unemployment and record-high job vacancies. Capitalizing on our highly educated population is key to ensuring that Canada has enough trained workers to fill the spaces left by retirements.

From 2016 to 2021, the working-age population saw an increase of nearly one-fifth (+19.1%) in the number of people with a bachelor’s degree or higher, including even larger rises in degree holders in the fields of health care (+24.1%) and computer and information science (+46.3%).

In contrast, the number of working-age apprenticeship certificate holders has stagnated or fallen in three major trades fields—construction trades (+0.6%), mechanic and repair technologies (-7.8%) and precision production (-10.0%)—as fewer young workers replace the baby boomers who are retiring. Job vacancies in some industries related to these trades, such as construction and fabricated metal product manufacturing, reached record highs in 2022.

Over two-thirds (70.4%) of apprenticeship certificates in 2021 were in the key fields of construction trades (such as carpenters, electricians and plumbers), mechanic and repair technologies (auto mechanics) and precision production (welders).

The total number of working-age people with apprenticeships declined in mechanic and repair technologies (-7.8%) and precision production (-10.0%) from 2016 to 2021 and stayed relatively level in the construction trades (+0.6%), as the number of younger entrants could not replace those retiring quickly enough.

This contrasts sharply with a rise of nearly one-fifth (+19.1%) in the number of working-age people who have a bachelor’s degree or higher and poses a serious challenge for industries relying on the skilled trades. In 2021 and 2022, the demand for skilled trades workers reached record highs. Job vacancies in the occupational category of “trades, transport and equipment operators and related occupations” that required at least a trades or apprenticeship credential nearly doubled from late 2019 to late 2021. Likewise, job vacancies in some related industries such as construction and fabricated metal product manufacturing reached record highs in 2022.

This trend can be expected to continue over the next decade as baby boomers march towards retirement. For example, in 2021, 3 in 10 employed people (30.2%) with an apprenticeship in mechanic and repair technologies or precision production were aged 55 or older.

In the construction trades, this share was 22.1%, similar to the average for all employed people (23.0%), but with demand for housing remaining high, the construction sector is nonetheless facing major labour shortages.

The trends in the field of construction differed by province. Quebec, Manitoba, Saskatchewan and British Columbia saw increases in the number of people with an apprenticeship certificate in the construction trades (ranging from increases of 4.6% to 8.3%), while the Atlantic provinces, Ontario (-3.8%) and Alberta (-3.5%) experienced decreases.

The number of potential workers in the trades fields of construction trades, mechanic and repair technologies, and precision production has been limited by the underrepresentation of women, racialized groups and immigrants.

Women made up 2.4% of working-age apprenticeship certificate holders in these fields in 2021.

Racialized groups as a whole made up 7.1% of working-age apprenticeship certificate holders in these trades, whereas they made up 27.3% of the total working-age population.