Canada holds its own in energy efficiency rankings 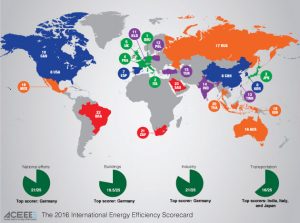 Germany continues to lead the world in energy efficiency, followed by Italy and Japan (tied for second place), France, and the United Kingdom (not reflecting energy-related government changes in 2016), according to the 2016 International Energy Efficiency Scorecard published by the nonprofit American Council for an Energy-Efficient Economy (ACEEE). New to the rankings this year are eight nations: Indonesia, Netherlands, Poland, Saudi Arabia, South Africa, Taiwan, Thailand, and Turkey.

Together these countries represent 75 per cent of all the energy consumed on the planet and over 80 per cent of the world’s gross domestic product (GDP).

According to the report, Canada was strongest in buildings energy efficiency due in part to its comprehensive appliance and equipment standards, which cover a large number of products on the market, and its mandatory EnerGuide labeling program, modeled after the EnergyGuide label in the U.S. Canada has taken steps to improve the benchmarking and labeling of energy use in its buildings through a new benchmarking portfolio manager that rates buildings’ energy performance against similar buildings.

German Ministry for Economic Affairs and Energy Senior Advisor for General Issues of Energy Efficiency Georg Maue said: “Energy Efficiency plays a key role in Germany’s energy policy, the Energiewende, which aims to achieve a highly efficient and almost carbon neutral economy by 2050 at the latest. Our latest program, the National Action Plan on Energy Efficiency (NAPE), focuses on innovative industrial processes, energy-efficient buildings and products, and long- term investments. We are happy and grateful that ACEEE honors German efforts in its report. However, we will continue to step up our efforts, as there is a long way to go for us to reach our target of reducing the energy demand by 50 per cent by 2050.”

The ACEEE report notes that the United States, which improved its standing by tying with South Korea for eighth place, still has substantial room for improvement: “Despite its leadership on a number of policies, the United States falls behind most of the EU countries on our list in addition to China and Japan. The United States still has no binding energy savings goals, unlike Germany, France, Japan, and other countries which have a national energy conservation plan in place. The United States could take advantage of existing efficiency opportunities by mandating building energy use disclosure polices and categorical labels for appliances.”

Backgrounder
The maximum possible score for a country was 100. ACEEE awarded 25 points each to the four categories: national efforts, buildings, industry, and transportation. Points were then allocated in each category based on how each country performed relative to others. ACEEE awarded the highest score available for a given metric to at least one country, which means that if any country were to emulate the top practices and results in each metric, it could obtain a score of 100. However, no country scored full points on all the metrics, indicating that all of them have room for improvement. The report’s scores and rankings were reviewed by experts from various countries.