The monthly value of building permits across the country increased 6.8% to $11.2 billion in November 2021, pulled along by construction intentions in the residential sector which rose 12%. 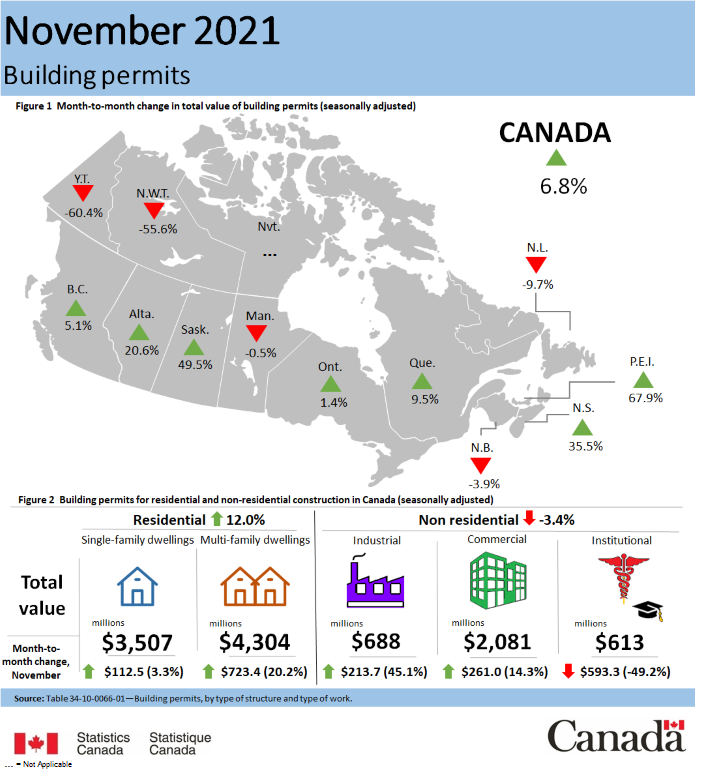 The latest data from Statistics Canada reveals that the total value of building permits across the country increased 6.8% to $11.2 billion in November 2021 over the previous month. Nationwide, construction intentions in the residential sector rose 12% while the non-residential sector showed a slight decline of 3.4%.

The month-over-month growth of construction intentions for the residential sector reached its highest level since a record set in March 2021 on a national basis, and for November the greatest rise was seen in British Columbia (+31.7%).

The total value of multi-family permits saw 20.2% growth over the previous month, where a $256 million permit for the Plaza One residential tower in Surrey pushed British Columbia 53.9% higher for the month.

Single family home permits rose 3.3% across the country, and in Nova Scotia the value of single-family permits rose 35.9% to a record value of $118 million in November.

Optimism is alive in construction intentions for the commercial sector which overall saw a rise of 14.3% across the country, with Alberta (+140.2%) leading the growth, thanks in part to a $316 million permit approved for the BMO convention centre expansion in Calgary.

Industrial permits rose 45.1% in November following a downturn in October. Much of the growth was from Ontario (+98%), where permits reached their highest level since August 2019.