Nearly 5000 students and young professionals had the opportunity to explore careers in many sectors of the construction industry at the 2016 Future Building Show in London, ON.  Exhibitors at the annual career exhibition included the Ontario Pipe Trades Council, Ontario College of Trades, Refrigeration Local 787 Training and UA Sprinkler Fitters, among others. 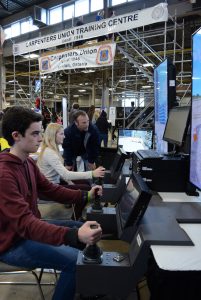 Sean Strickland, CEO of the Ontario Construction Secretariat, explained that there was great representation from schools across Ontario, including groups from Timmins, ON and Manitoulin Island, ON.

“Some [of the students] come from construction backgrounds, but for the vast majority of them, this is the first time being exposed to the variety of different options of the construction trades,” he explained.

As a means to learn about the array of careers, visitors to the show, which was held April 19 to 21, had the chance to try their hand at soldering pipe, dry walling, virtual painting, and even working a crane simulator. According to Strickland, it took attendees approximately two to three hours to make their way through the interactive show. “The building shows are very much an experiential career fair,” Strickland said.

Employment Ontario provided the core funding for the show, and Strickland noted that the contribution from the industry was overwhelming. “We couldn’t do it without the industry’s support, people donated so much of their time at the booths.”

The 2017 Future Building Show will be held in Ottawa, ON in April, though the exact date has not been determined.