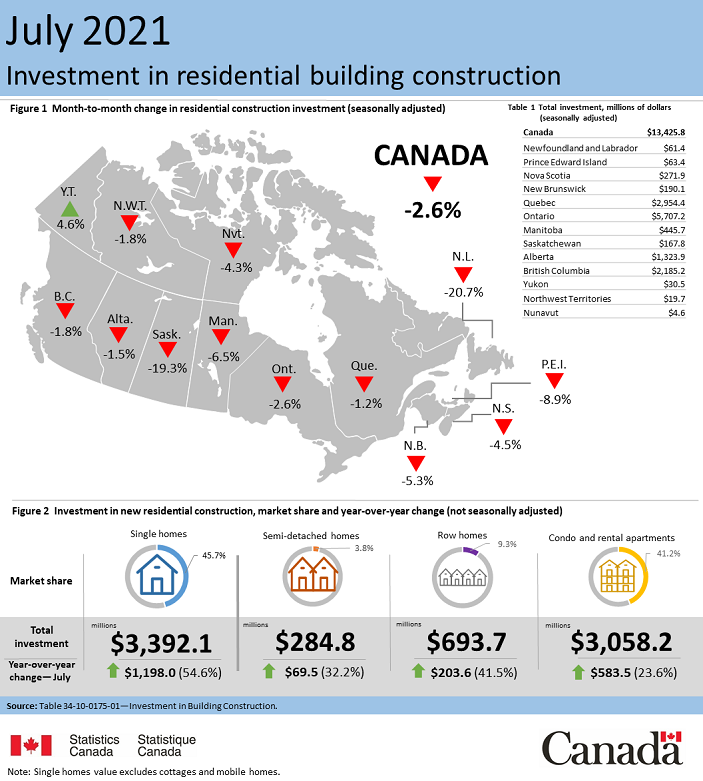 Statistics Canada has announced investment in building construction was down 1.7% to $18.1 billion in July.

Residential construction investment was down 2.6% in July, a third consecutive monthly decline after a sustained period of strong growth from May 2020 to April 2021.

Declines in all provinces brought investment in single-family homes down 4.0% to $7.2 billion. Ontario posted the largest decrease after reaching a record high in April 2021.

Multi-unit construction investment was down 1.0% to $6.2 billion in July, thanks to decreases in seven provinces.

Non-residential construction investment was up 0.9% in July to $4.6 billion.

Institutional investment posted its ninth consecutive increase (+2.2% to $1.3 billion), with the majority of provinces and territories reporting gains in July. Construction of a York University building in Ontario as well as ongoing construction of secondary schools in Quebec and British Columbia contributed to the growth.

Commercial investment was up 0.6% to $2.5 billion in July. Alberta posted the highest increase (+6.0%) due to higher spending on office buildings and buildings for trade and services.

Industrial investment was the single component to post a decline in July, edging down a minor 0.2%. Quebec decreased for a second month, while Alberta and Prince Edward Island also had notable declines.