Investments in Building Construction reaches $20B in February

Month-over-month investment in single family homes rose 4.9% to $8 billion in February with increases reported in seven provinces, led by Ontario (+5.3%) and Quebec (+8.2%). 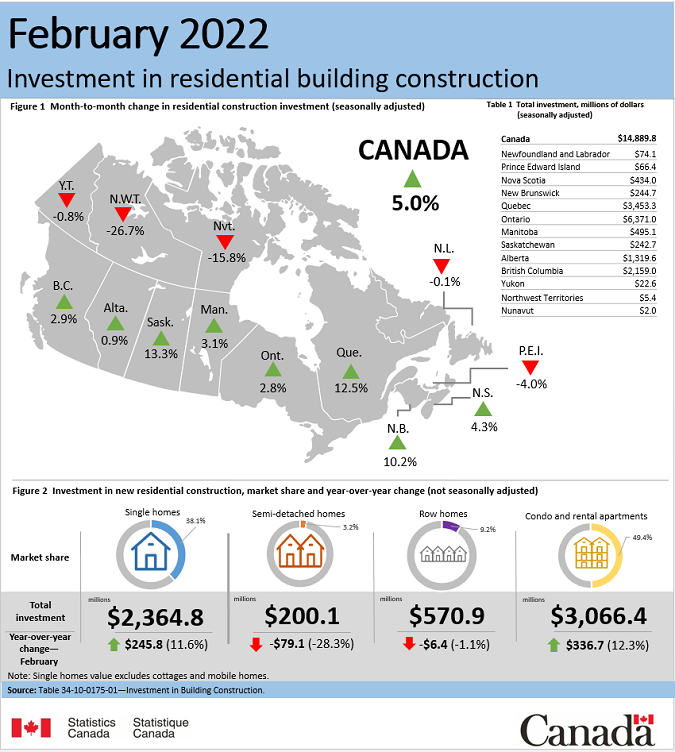 The latest release from Statistics Canada reporting month-over-month investments in building construction across the country reveal an overall increase of 4% in February over January, with building construction investments reaching the level of $20 billion for the first time. This marks a 19% year over year increase from last February’s record output of $16.8 billion.

Gains were reported in both the residential and non-residential sectors, and most provinces reported increases, with Quebec accounting for over 50% of the overall monthly increase.

The rise in building construction investment in February aligns well with the record value of building permits issue in the same month which rose 21% over January to $12.4 billion.

Investment in single family home construction rose 4.9% to $8 billion in February with increases reported in seven provinces, led by Ontario (+5.3%) and Quebec (+8.2%).

Multi-unit construction increased 5.1% to $6.9 billion with Quebec (+16.8%) leading the way. Not all provinces saw increases in multi-unit, as Saskatchewan declined for a third straight month returning to more historic levels, following higher investment in October and November 2021.

Although not as hot as the housing sector, non-residential construction investment saw an increase of 1.1% to $5.1 billion in February.

Commercial investment was up 1% to $2.8 billion, led by Alberta (+3.2%). The only two provinces that posted declines in this area were New Brunswick and Manitoba.

Investment in the institutional construction was largely unchanged in February (+0.1%). Similar to the previous month, gains in Quebec (+1.9%) offset losses posted in seven other provinces.

While industrial construction investment rose 2.8% to $893 million across the country, with Ontario (+3.3%) and Quebec (+4.5%) accounting for over 90% of the national gain. This was largely due to several new manufacturing and maintenance building projects in both provinces, while other provinces remained at more historic levels.