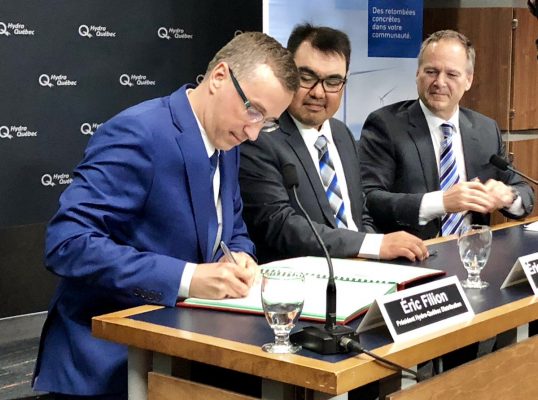 The hydroelectric, tankless power plant can fulfill 80 per cent of the energy needs in Inukjuak that are currently coming from fossil fuels PHOTO: Twitter/Innergex

Partners of the Innavik project inked an agreement May 27 to build a $125 million hydroelectric generation station in one of Quebec’s northernmost, diesel-fueled communities.

Hydro-Québec, Pituvik Landholding Corporation and Innergex Renewable Energy Inc. say the 7.5-megawatt station on the Inukjuak River will bring renewable energy to residents of Inukjuak, Nunavik, an Inuit community situated on the north bank of the river.

Officials estimate the community of 480 homes could see 700,000 fewer tonnes of greenhouse gas emissions over the next 40 years and a considerable reduction in hydrocarbon consumption.

“Switching to hydropower will enable us to replace diesel and reduce greenhouse gas emissions for our basic electricity and heating needs, while saving on fuel costs,” said Eric Atagotaaluk, president of Pituvik.

The provincial government will support a program to convert fuel-fired water and space heating systems to electricity as part of the project.

Innergex will head up construction and operation of the run-of-river generator, with site preparation slated for the fourth quarter of 2019. Construction will begin in 2020, and the station is expected to be operational by late 2022.