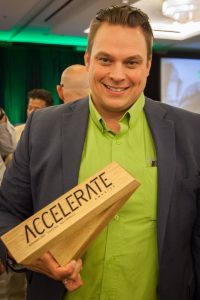 Marc-André Lesmerises, president and owner of Carnot Réfrigération with the Accelerate Award.

A profile of Lesmerises in the online magazine’s July-August issue explains why he co-founded Carnot Réfrigération in 2008, at the age of 31. The company became one of the first manufacturers of all-natural CO2 transcritical refrigeration systems in North America, providing CO2 systems to Sobeys and other supermarket customers as well as warehouses, wineries, ice rinks and data centres. Carnot Réfrigération is located in Trois-Riviéres, QC.