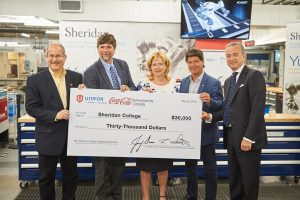 Coca-Cola Refreshments Canada and the Canadian labour union Unifor are providing 15 new $2000 scholarships for women enrolled in Sheridan College’s skilled trades programs. The announcement was made on May 25 at Sheridan College’s Centre for Advanced Manufacturing and Design Technologies.

“There are tremendous career opportunities available in the skilled trades and manufacturing industries, and we hope that this generous initiative by Unifor and Coca-Cola Refreshments Canada will encourage more women to consider this exciting career path,” said Dr. Jeff Zabudsky, Sheridan’s president and vice chancellor.

The scholarships will be available for the 2016-2017 academic year.

Unifor, which was officially formed on August 31, 2013, is the product of a revitalization project undertaken by the former Canadian Auto Workers union (CAW) and the Communications, Energy and Paperworkers Union of Canada (CEP). CAW and CEP leadership set a goal to form a new Canadian union, with a new structure and identity that would better represent its members, organize and empower all workers (whether in the union or not) and build a more cohesive and strategic movement of working people.

It is Canada’s largest private sector union, with over 300,000 members in a diverse range of sectors, across the country. Unifor is the certified collective bargaining agent for workers in thousands of workplaces, but also provides an opportunity for all workers – even those without collective bargaining rights – to hold union membership, through its community chapters program.

Unifor is staffed with experts in the field of labour relations, economics, communications, research, pensions and benefits, labour law and adult education along with a team of strategic contract negotiators.