The total value of investment in building construction rose 9.3% to $53.1 billion in the first quarter, thanks to continued strength in the residential sector. 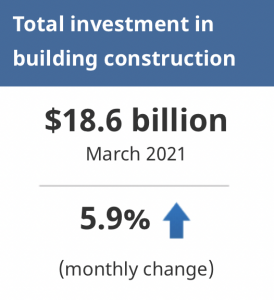 Statistics Canada has announced total investment in building construction increased in March for a third consecutive month, reaching a new high and beating out February’s record output of $16.8 billion.

Helping lead the charge was the residential sector, assisting in the overall 5.9% uptick in March to $18.6 billion.

Residential construction investment increased for the eleventh consecutive month, rocketing up 7.6% to $14.0 billion in March.

Gains in Quebec and Ontario led the overall increase in residential, with six provinces reporting declines.

Non-residential construction investment also rose slightly 1.1% to $4.6 billion in March over the previous month. The commercial and industrial investment components were below pre-COVID-19 pandemic levels.

Institutional construction investment was up 2.2% to $1.2 billion. Multiple high-value projects in Montréal contributed to a 2.6% increase in Quebec, where investment totalled $315 million in March. British Columbia recorded another strong month in March, with the continued construction of new schools in Burnaby, North Vancouver and Vancouver.

The total value of investment in building construction rose 9.3% to $53.1 billion in the first quarter, thanks to continued strength in the residential sector (+12.4%). Investment for residential buildings reached $39.5 billion, largely because of increased spending on single units in Ontario (+21.8%) and Quebec (+24.9%).