All provinces except British Columbia and Newfoundland and Labrador posted lower numbers. 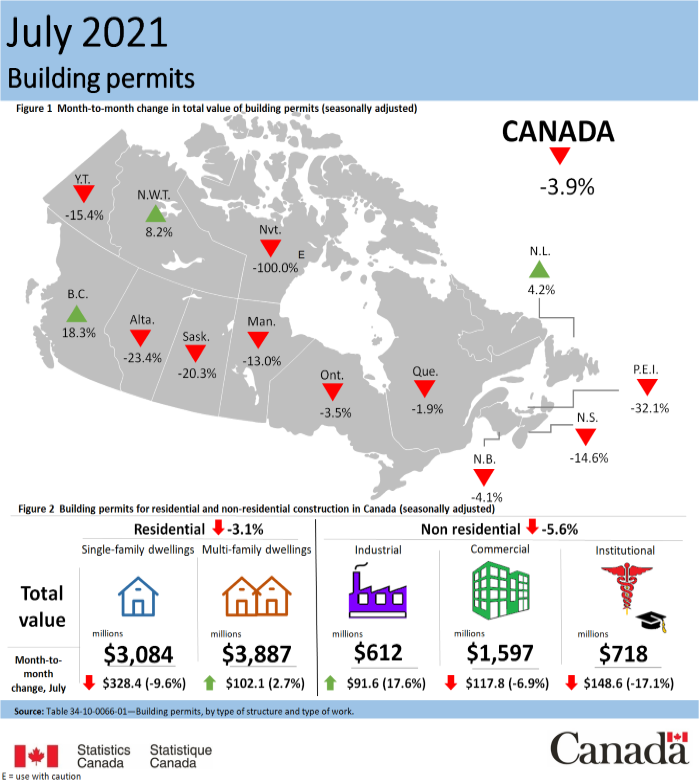 Statistics Canada has announced the total value of building permits in Canada decreased 3.9% to $9.9 billion in July.

All provinces except British Columbia and Newfoundland and Labrador posted lower numbers, with the majority of the national decline reported in Alberta (-23.4%).

Ontario weighs down residential permits across the country

Single-family permits also fell 9.6% in July, with only two provinces showing growth. Ontario (-9.1%) contributed the most to the decrease.

Construction intentions for multi-family units rose 2.7% in July. British Columbia posted an increase of 55.1%, which was driven by high-valued condo projects in the city of Surrey. In contrast, Ontario reversed strong growth in June (+67.6%) and fell 11.7% in July due to fewer high-valued condo permits reported for the census metropolitan areas.

Non-residential permits down in July

Non-residential permit values declined 5.6% to $2.9 billion in July, despite Ontario’s strong growth of 17.3%. Seven provinces were down, with Alberta reporting the largest decrease (-46.9%).

Institutional permits decreased for a third consecutive month to $718 million, with eight provinces reporting lower values. The majority of the decline stemmed from Quebec (-36.8%), following a strong June (+40.0%) when multiple high-valued permits were issued for alternative care and senior homes.

Alberta’s commercial permits fell 45.5% in July, following a notable increase in June (+56.6%). The decline in Alberta and in six other provinces pulled the value of commercial permits at the national level down 6.9% to $1.6 billion.

The value of industrial permits was up 17.6% to $612 million, with half the provinces reporting growth. Quebec (+59.5%) led the increase, with a $30 million warehouse permit.