Construction intentions in the institutional and commercial sectors drive growth, along with single family homes. 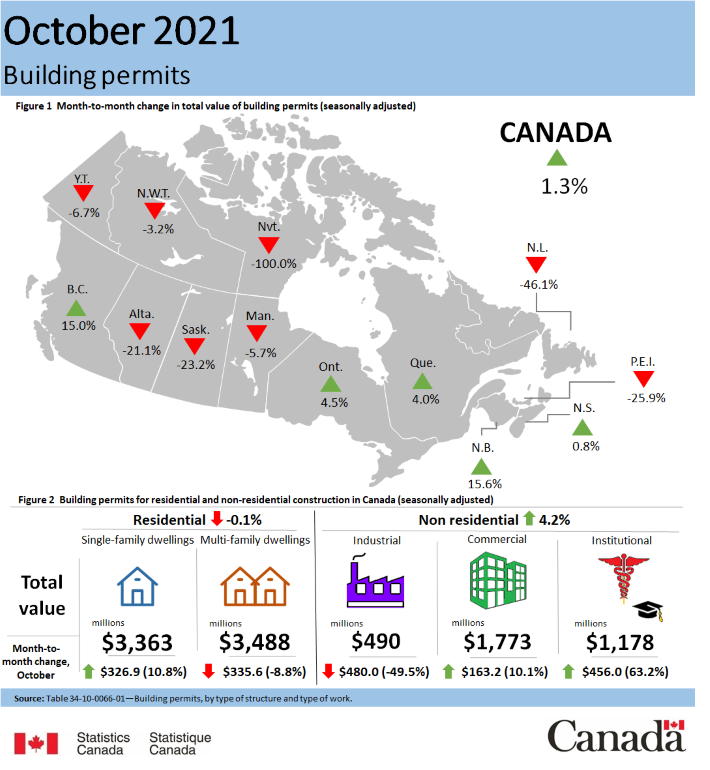 The latest report from Statistics Canada show the total value of building permits issued in October 2021 increased 1.3% to $10.3 billion over the previous month with British Columbia (+15.0%) and Ontario (+4.5%) leading the way.

Construction intentions in the industrial/commercial/institutional (ICI) sector boosted the month-over-month growth with an increase of 4.2% (reaching $3.4 billion, 16.7% above the pre-pandemic level in February 2020), while the overall residential sector remained relatively flat for the month, edging down 0.1%.

Residential construction intentions in Ontario (-2.2%) and B.C. (-4.9%) pulled the entire sector down.

Multi-family units fell 8.8% at the national level, following a strong September, mostly due to fewer higher valued
permits issued in Ontario and British Columbia, but the anomaly was New Brunswick (+123.8%) reporting its second highest value on record, due to apartment permits in the cities of Saint John, Moncton and Shediac.

The value of permits for single-family homes rose 10.8% nationwide in October, led by Ontario (+15.1%), while Saskatchewan was the only province to report a decline (-8.6%).

Commercial building permits rose 10.1% for the month, with Ontario leading the way (+36.8%) with notable projects in Toronto such as the office renovation for the SickKids foundation.