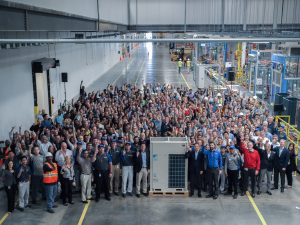 A ceremony that gathered approximately one thousand employees on the factory floor marked the first VRV unit off Daikin’s Texas production line.

Daikin Texas Technology Park, Daikin North America LLC’s new $417 million, four million sq.-ft. campus located outside of Houston, recently welcomed its first VRV unit off the production line during a celebration led by CEO Takeshi Ebisu. Daikin VRV technology is not entirely new to North America. Daikin introduced VRV units in 2005 with products imported from Japan and Europe. In February 2014, Daikin was the first HVAC manufacturer to operate assembly lines for VRV outdoor units in North America with limited production in Houston, TX. Now with the opening of Daikin’s new state-of-the-art campus in Waller, TX, the production of current VRV units, as well as the development of new product designs will “increase productivity drastically by 22 per cent and lead time will decrease substantially in order to respond to customer demand,” said Kou Ishitani, Daikin senior vice president of manufacturing.

“Our vision is to continue to build on a strong and sustainable business foundation as a leading manufacturer in the North American market,” said Takayuki Inoue, Daikin executive vice president of sales and marketing. “We aim to earn the respect and trust of our people, customers and the communities we serve,” he concluded.