Danfoss Acknowledges Sheridan College With 2020 EnVisioneer of the Year Award

The award was presented at Sheridan’s Trafalgar campus by John Galyen, President of Danfoss North America. 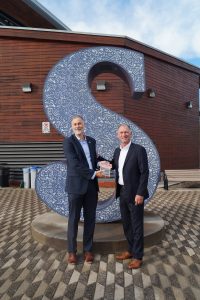 Herb Sinnock, Director of Sustainability accepts the EnVisioneer of the Year award from Danfoss President, John Galyen at Sheridan’s Trafalgar Campus in Oakville.

Danfoss has announced Sheridan College in Oakville, ON as its 2020 EnVisioneer award winner.

In 2016, Sheridan College began a three-year project to decommission its nearly 50-year-old steam plant that served six of its buildings with a new third-generation hot water district heating system capable of serving centralized heat to the entire campus. It elected to utilize energy transfer stations — the interconnected system of heat exchangers, valves, pumps, programmable controller, piping and controllers that takes the central heat and transfers it into individual buildings — engineered and built by Danfoss.

By choosing to install packaged ETS from Danfoss with factory-fitted and configured controls as part of the new district heating system, the period when buildings would be without heat could be minimized and multiple buildings could make the transition to the new low temperature hot water district energy system in quick succession. The ability of Danfoss to customize the pipe network on each ETS to facilitate connection to the unique conditions in each mechanical room minimized delay in connection of the new equipment. It also enabled quick movement of complete energy transfer stations into the tight spaces of the existing system.

Launched in 2010, the annual EnVisioneer of the Year award competition recognizes North American original equipment manufacturers, building owners, municipalities, contractors and end users that have introduced a new product, opened a new facility or invested in a building or system upgrade in the past 18 months using Danfoss products or solutions to realize significant energy and environmental savings.

“Danfoss is excited about the success Sheridan College has found in environmentally-friendly district heating,” said Jeff Flannery, business development manager at Danfoss. “Danfoss has extensive history in district energy technologies around the world, and we’ve built on that knowledge to bring factory-designed and locally-built energy transfer stations to the North American market. This technology enables us to ensure system uptime and performance, optimize efficiency, and facilitate code compliance, start-up and commissioning.”

The award was presented at Sheridan’s Trafalgar campus by John Galyen, President of Danfoss North America. Herbert Sinnock, Sheridan’s Director of Sustainability, accepted the honor on behalf of Sheridan. The official presentation was postponed due to COVID-19.