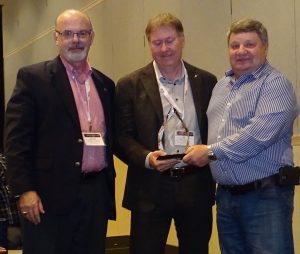 With a theme of Celebrate the Magic, the Mechanical Contractors Association of Canada (MCAC) held its 75th annual national conference November 14-17 on the grounds of Disney World at the Disney Yacht and Beach Club in Lake Buena Vista, FL.

The agenda for the four-day event included golf, social events and educational keynotes that carried messages for personal as well as professional improvement.

The president’s report, delivered at the annual general meeting by current president Del Pawliuk, centred on MCAC’s ongoing push for prompt payment legislation at the federal level. While actively speaking to all MPs in Ottawa, the association is also working with provincial governments and is optimistic about developments happening in Ontario, Quebec and Alberta.

Senator Donald Plett, who introduced the Canada Prompt Payment Act (Bill S-224) in the Senate on April 13, was in attendance and was passionate about moving the legislation along. At the time, it was stalled in the Senate, and Senator Plett encouraged attendees to reach out to Senator Pierrette Ringuette to keep the motion moving forward. (Author’s note: Bill S-224 passed the second reading vote in the Senate on November28.)

A presentation was made to John Telford, director of Canadian affairs with the UA, who is retiring. Telford took the opportunity to thank the association and shared a parting note: “I’m not ready yet, but I’ve selected my pallbearers: three union members and three contractors. I thought it fitting they let me down one more time.”

As for the keynote speakers, James Benham, president of JBKnowledge, led a two-part future forecast. Benham teaches construction science at Texas A&M University. “Mark my words,” he said, “Fundamental change is coming to this industry.”

He sees the merging of computer science with construction science leading to new ways of doing business. Companies are investing in technology today to drive return on investment (ROI), and he cited BIM (building information modeling) as a game changer, saving time and improving safety.

All students today are building virtual 3D models in school, and he sees a career path for virtual design construction, noting that today “every construction executive should be able to manipulate 3D design models.”

Emerging technology that is being used in construction includes drones, 3D scanners, prefab/modularization and virtual reality or augmented reality platforms. Other new emerging tech includes wearable devices that will aid workers with strength, posture and endurance. Benham is really excited about practical uses for augmented reality, calling Microsoft’s HoloLens a truly “disruptive” technology. It allows people to visualize 3D plans in a space and allows service techs to share what they’re seeing with remote experts to help solve problems in real time.

He also believes mobile technology is at a tipping point, saying five per cent of his clients have gone to paperless job sites. They’re using tablets.

Other talks included: insights into the underworld of cybercrime, by security expert Chris Mathers, who highly recommends passwords with 10 characters or more; a review of tender law in Canada by Dan Leduc, who insisted contractors need to be more proactive and aggressive to protect themselves with language on their bids; and inspiration from former NHL all-star Theo Fleury.

A day-long educational forum for service contractors was also held a day before the event.