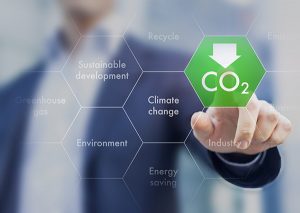 Currently, the HVAC/R industry is undergoing a third paradigm shift in regulating refrigerants–this time the transition is specifically aimed at addressing climate change and greenhouse gas emissions. The earlier two transitions from CFCs to HCFCs, then from HCFCs to HFCs, were somewhat of a “no-brainer.” The environmental benefits were clearcut. This time around, the advantages of the transition are less evident.

Operationally, some of the proposed refrigerants with a very low global warming potential (GWP) could have unintended detrimental consequences. Some applications moving to a low GWP option will encounter refrigerants with a higher flammability rating, lower capacity and less efficiency. In these cases, equipment owners could experience increased first and/or operating costs. However, the timetable for this third transition makes it possible to innovate a number of safe and cost-effective solutions.

ENERGY, REFRIGERANTS AND THE ENVIRONMENT

The most immediate and impactful way to reduce greenhouse gas emissions is to focus on improving energy efficiency. Energy efficiency is directly linked to reducing the demand for fossil fuels, and therefore, CO2 emissions, which can represent over 95 per cent of equipment net CO2 emissions.

In fact, the contribution of energy consumption to the carbon footprint by a building’s HVAC/R equipment can be more than twenty times greater than the refrigerant selected for use in that equipment. In Canada, emissions from building energy consumption is relatively small in comparison to other sectors, however, it has not improved much.1 This shows that the answer to climate change is complicated, but it is essential to continue to look for ways to reduce the carbon footprint of buildings.

Eliminating the effect of refrigerant is negligible compared to reducing energy consumption by improving efficiency. Yet, a fervour remains over the GWP of the refrigerant. So, what steps can or must be taken to reduce net CO2 emissions?

In 2016, 196 countries came together in what some observers consider the second most significant landmark agreement on the environment: The Kigali Amendment. It uses the structure of the 1987 Montreal Protocol, a treaty that phased-out chlorofluorocarbon (CFC) and hydrochlorofluorocarbons (HCFC) refrigerants to protect the ozone layer.

At Kigali, the focus was on greenhouse gas reductions and climate change. Unlike the elimination of CFC and HCFC refrigerants, the Kigali Amendment targets a reduction in HFC refrigerants down to 15 per cent of baseline over the next few decades. The 15 per cent allows for continued use for servicing indefinitely.

Note, this evaluation is done on net CO2 equivalence, which is likely to affect higher-GWP refrigerants in applications (that is foam, propellants, refrigeration and solvents, among others) that are more prone to leaks or used directly in the atmosphere.

Under the Kigali Amendment, each country is free to implement their measures to reduce CO2 emissions in a way best suited for their national interests and capabilities. 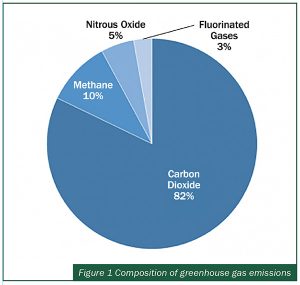 While a global greenhouse gas agreement is important, there remain challenges with implementation due to where greenhouse gases derive. The most commonly known and major contributors to climate change include carbon dioxide, methane, nitrous oxide, industrial chemicals and hydrofluorocarbons, in that order. Figure 1 shows a breakdown of these gases.2

In 2014, the European Union passed stronger F-gas regulations. This was a major step in addressing some higher-emitting applications, including commercial refrigeration and vending machines, and small charge systems. The next step is to address energy consumption through “EcoDesign,” which prescribes measures to lower energy consumption.

F-gas actions include mobile air conditioning transitioning to mostly near-zero-GWP R-1234yf and some to CO2. This results in an early and significant drop in European CO2 equivalent emissions. The EcoDesign standards evaluate the net energy consumption, not just at design conditions, and prescribe minimum energy efficiency limits by application.

Refrigerants that yield lower energy efficiency draw more power, and hence, increased indirect CO2 emissions through electric power generation–or drive manufacturers to address the lower efficiency with higher cost technology and materials. While renewables have seen a tremendous surge in adoption as a percentage, they represent approximately 25 per cent of the total power production; the balance of CO2 emissions is due to burning fossil fuels, such as coal.3

Regardless of how quickly industry could shift to low-GWP refrigerants due to regulations, the available low-GWP options across the many sectors are limited with few-to-no non-flammable options for commercial applications. This may be less of an issue for industrial facilities that are accustomed to handling higher risks, but is a real challenge for commercial buildings, contractors and owners that are not accustomed to using these types of refrigerants, that cannot afford the added safety considerations, or that are limited by building codes currently prohibiting the use of flammable refrigerants.

Low pressure alternatives have non-flammable options available, and there are commercial opportunities that enable adoption in some applications. However, medium pressure applications have both non-flammable and flammable options, while high pressure alternatives to R-410A are all flammable. R-410A is the leading choice for rotary and scroll compressors used in residential and commercial systems. These applications include systems with direct expansion coils in the conditioned air stream or which could be applied in poorly-ventilated areas that could allow an unsafe concentration of the refrigerant to collect in the event of a leak.

Safety standards such as ASHRAE 15, and its equivalents in other regions, are in various stage of revision to reflect safe ways to apply some of the new refrigerants. We are likely to see special considerations, and possible limitations on the use of flammable refrigerants in some applications.

HVAC/R equipment manufacturers are working diligently to come up with the next generation of products using the new low-GWP refrigerants. Products are slowly coming to market, mostly based on existing technologies unoptimized for the new fluids–fluids that are higher cost than today’s refrigerants. With little economic incentive for building owners to transition, the demand for the new refrigerants remains low, but as products begin to be developed and optimized for these new fluids, addressing any performance trade-offs, will begin to accelerate.

The good news is, unlike ozone depletion where near drop-in alternatives for R-22 and R-123 were non-existent and remain to this day, the performance of multiple fluids with similar properties to R-134a and R-410A are becoming more available. This provides more options for future changeover should availability or cost become issues.

Today and for the foreseeable future, economics for commercial applications favor HFC refrigerants, such as R-410A and R-134a. But with low-GWP-refrigerant alternatives to R-134a—like R-450A and R-513A—the future of an R-134a unit today can be protected against obsolescence or significantly reduced capacity. For R-410A, alternatives are not as straightforward due to flammability. Nevertheless, the low-GWP options are attractive from an efficiency and/or capacity standpoint.

A COMPLEX BUT SOLVABLE CHALLENGE

Within the HVAC/R industry, the use of refrigerants is just one small part of the greenhouse gas equation. The search for low-GWP refrigerants must strike the right balance of other factors including safety, reliability, availability, affordability, and performance. That performance is critical in terms of the environmental view.

For this transition, government is taking more time to consider the needs of end users. As a result, there are a number of reliable, safe and cost-effective solutions already available. Investment and innovation is progressing, because prior experience has produced firmer ground rules and more definite direction. Consequently, stakeholders concerned about capital expenditures, operating costs and the environment enjoy a clearer focus due to a smoother transition.