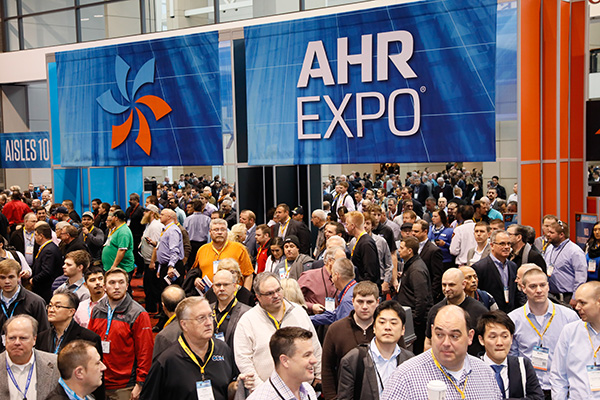 Economic outlook among exhibiting HVAC/R manufacturers is on the upswing, according to an annual survey conducted by AHR Expo and ASHRAE. Among survey respondents, 89 per cent forecasted excellent or good growth – up 15 per cent from 2017.

This year’s event attracted around 2,800 Canadian visitors, and 150 countries were represented. The tradeshow floor also hit all time highs with 2,155 exhibiting companies and 530,000 square feet of exhibit space.

“With our product managers and engineering design teams here, we not only can answer questions, but we also get direct feedback from clients that helps to shape our next generation of products,” said Tim Stapula, director of marketing at Wilo.

Danfoss’ Turbocor TTH/TGH high-lift compressor, which won in the green building category, was named Product of the Year. The company has been recognized six times in the expo’s Innovation Awards program for its Turbocor compressors.

“It is a tremendous honour to have been recognized once again by the HVAC/R industry for our commitment to advancing energy efficiency through innovative engineering,” said Ricardo Schneider, president, Danfoss Turbocor Compressors.

Overall, Danfoss has been recognized 28 times over 16 years of the award program.

It was also awarded Product of the Year in 2015 for the Turbocor VTT compressor series.

See our archives at www.hpacmag.com for a full list of Innovation Award winners.

Italy-based manufacturer Riello announced the introduction of its high-efficiency wall-hung boilers to North America at AHR, including Family Pro, Residence Pro and Condexa Pro brands. Evergreen Products International, based in Mississauga, ON, has been appointed distributor of five condensing models for the region.

“We are confident this line-up represents our commitment to introduce into the residential heating market, both in Canada and USA, an innovative range of products,” says Umberto Ferretti, CEO of Riello Group.

A series of awards were presented at this year’s AHR Expo.

Seresco gave Quota Buster awards to 11 manufacturer’s rep firms that contributed to the company’s 34 per cent increase over 2016. Winners include Kilmer Environmental, based in Mississauga, ON, Qualite Air Totale, based in Laval, QC and The Master Group, based in Boucherville, QC. The company also presented its 2017 Rep of the Year award to Havtech, located in Columbia, MD.

JSA Sales, located in Coquitlam, BC, is the recipient of Centrotherm’s first annual Manufacturer’s Representative of the Year award. Centrotherm, headquartered in Albany, NY, stated that JSA Sales helped it to establish a strong presence in Western Canada. The award also recognizes JSA’s sales record and team performance. Ingrid Mattsson, Uponor director of brand and corporate social responsibility, was presented the Carlson-Holohan Award of Excellence.

The award recognizes an individual’s contributions in the field of steam and hydronics. Criteria includes a current or past record of fundraising for an industry cause, proven volunteer activities in association or committee work and demonstrated leadership in the industry as an educator and mentor.

Until 2020, Mattsson will act as the sole guardian of “Gil’s wheel” – the original Bell and Gossett sizing wheel, invented by Gil Carlson.

Mattsson will be required to bring the wheel to any seminar or public speaking engagement she delivers and tell the story of Gil’s wheel. She will also search for a candidate to carry the award forward and make an investment to maintain the condition of the wheel.