In this example we take a look at the economics of swapping out a VAV system for a DOAS and chilled beam solution for a low-rise office building. 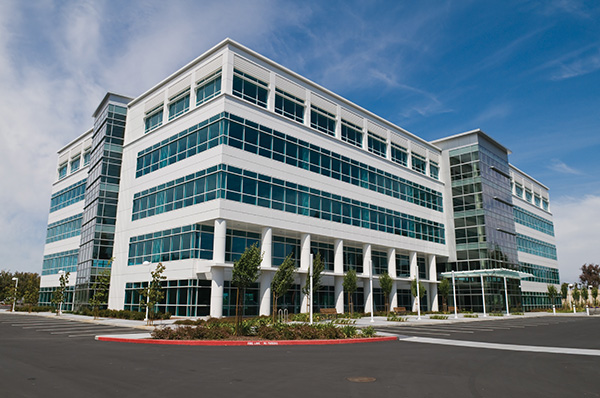 In part one of this article (March 2022) I spent some time reviewing the need for enhancing the amount of fresh air ventilation in buildings–one of the key recommendations from the international health and science advisory bodies during the pandemic.

I then went on to share one of many options available to achieve greater fresh air exchange in buildings through the use of a hydronic system solution using a dedicated outdoor air system (DOAS) in combination with active chilled beams.

This solution, with the proper controls in place, can achieve well-conditioned fresh air in occupied areas, and it can be incorporated into buildings as a retrofit or designed into new installations, all while effectively managing energy consumption.

For this article we’re going to analyze the potential benefits and energy savings in a typical commercial building.

We’ll consider an office building with five floors, a total area of around 200,000 sq. ft.

Our sample building uses the current ASHRAE ventilation guidelines of 17 cubic feet of air per minute (CFM) per person. Using a conventional HVAC system based on 400 sq.ft./ton, so we’ll have a total of 500 tons.

A conventional VAV air handler handles total load (latent and sensible) for a building. In our example (see Figure 2 below) the air handler design has a recycled air duct introducing 90% return air. 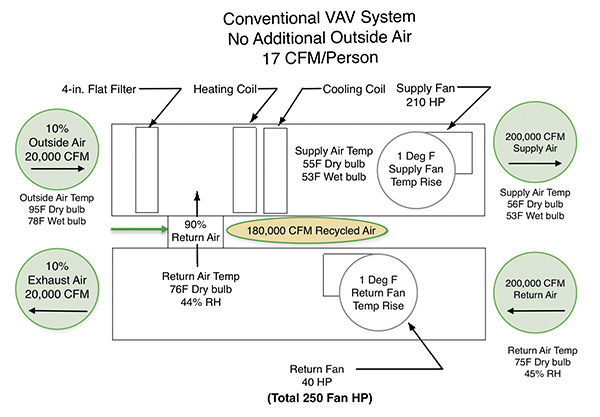 Looking at the air handler schematic, we need to circulate 200,000 CFM through the building to handle the design load. On the supply side we have: outside air intake at 10% of the supply air; a filter; a heating coil; a cooling coil; and a 210 HP supply fan. On the return side we have a 40 HP return air fan.

With only 10% outside air introduced into the system. This leaves potentially virus-laden air to recycle throughout the building.

To make our office building safer by doubling the amount of ventilation, from 17 CFM per person to 34 CFM per person, the air handling equipment might need to be upsized and extra costs will be incurred.

An extra 167 Tons would be required to satisfy the load. Using the same cost structure as before, we have a new annual operating cost of $440,000 or an increase of $80,000 per year.

The mechanical system would look the same as shown in Figure 2, except the exhausted and fresh ventilation air is doubled and the return air is dropped to 80%. The same HP fans would be in place to circulate the air.

Again, we are trying to make this building safer by doubling the current ventilation standards but also effectively reducing the operating costs.

Is this even possible?

First, we will rely on the much more efficient distribution options with hydronics versus air.

We treat just the latent load, which means only 40,000 CFM total for the entire building based on the doubled ventilation requirement (see Figure 3). 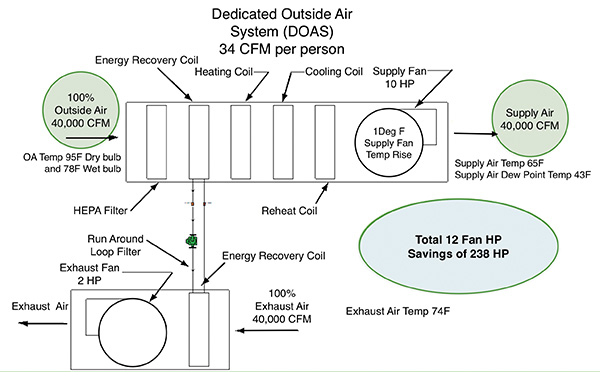 The air is moved to the occupied space and then exhausted from the building meaning no air is recycled (no return air) and hence no virus-laden air is re-introduced into other occupied spaces.

Applying the chilled beam injection pumping system (one pipe primary/secondary with local mixing as described in the Part 1 article) will provide the increased ventilation we are seeking along with lower annual operational costs with savings of $90,000 due to the reduced fan energy.

The sensible load is conveyed to the spaces via hydronics using a single pipe distribution system with local mixing per active chilled beam zone for temperature and humidity control.

A run-around loop is used to extract heat from the exhausted air and capturing this energy as first source for the incoming ventilation load.

As mentioned throughout these two articles, a chilled beam can offer significant energy savings. 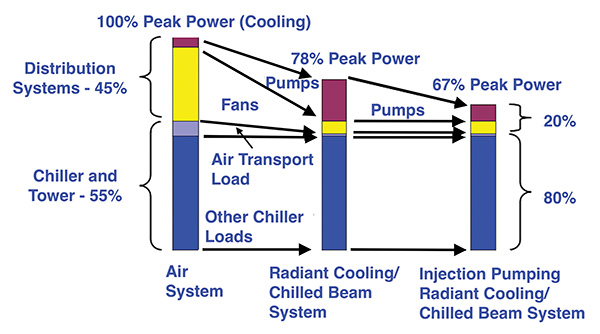 In Figure 4 we see the air system’s energy profile. The energy required to generate the Btus to satisfy the loads is 55% of the overall required energy. The balance (45%) is used to distribute the Btus.

A conventional chilled beam system decouples the loads, transporting the sensible load via hydronics reduces the fan horsepower required. While some of this HP now shifts to pumps, the total savings can be significant.

Chilled Beams are really the way to go in my opinion, and I expect this segment within our industry will grow. Seems to be a no brainer for any new building design, but this solution should also be considered for retrofit applications as well.

I hope these articles at least inspired some additional thoughts.

All buildings need to become safer indoor environments. This is where the fight against any future pandemic should begin.  <>

Mike Miller is VP Sales Canada, Taco Comfort Solutions and is a past president of Canadian Hydronics Council. Email: hydronicsmike@tacocomfort.com.