Are ECM Upgrades Worth It?

HVAC service contractors encounter failed fan motors every day, it might be time to stock replacement units for customers interested in saving energy. 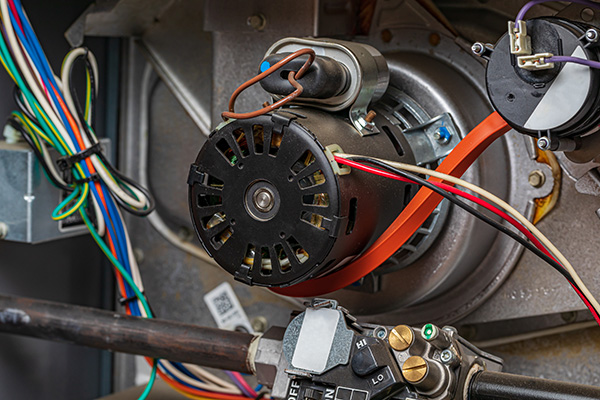 I know I’m sounding like a broken record, as I’ve made this statement many times in previous articles, but 1973 was a pivotal year for prescriptive Minimum Energy Performance Standards (MEPS) aimed at energy-using devices, not only in the HVAC industry but just about all other industries too.

The U.S., shocked by an oil embargo imposed by OPEC nations that year, started an immediate energy conservation campaign. One of the first rulings required all federal buildings to set cooling season conditions at 78F (25.5C) and 50% RH. National energy independence became the driver of efficiency initiatives until, of course, climate change came along.

It is not as if the HVAC industry went out of its way to be inefficient. I think it’s fair to examine the route taken and to wonder if such things as 97.5% AFUE gas furnaces would exist without a firm push from the government.

On the topic of HVAC efficiency, there is a hilarious YouTube video I saw of an old radio show featuring the 1950’s comedy duo Bob and Ray who act out a segment called “Wally Ballou at AC Factory” (have a listen). In the sketch, they have Wally interviewing a ficticious Mr. Martin Leppert, president of the Uncomfortable Air Conditioning Co.

At one point Mr. Leppert tells Wally his best customers are motel owners needing to be sure their customers leave at the proper check out time. One motel owner had a 10 am checkout time, but too many customers lollygagged past noon. So he installed Uncomfortable Air Units and now “hardly anyone sticks around past four in the morning, and the place is deserted by 6 o’clock.”

Now that’s funny, yet it points to a lingering issue whereupon even efficient units can be misapplied or operated inappropriately.

Even Mr. Leppert’s wacky AC unit needed electric motors to do the heavy lifting—providing “wind velocity of 38 knots.” The Bob and Ray parody had a lot to say about cooling systems, especially in public places like restaurants, auditoriums or theatres that kept patrons shivering rather than enjoying a well-conditioned space.

Sometimes mixing signals without prior experimental data, cooling system installers were typically told to install a more robust fan motor along with an adjustable motor pulley usually set at 4-in. diameter. Increasing the speed of some early centrifugal blowers did little to improve airflow across bloated heat exchangers, notoriously small evaporator coils and through tight ductwork.

The furnace OEM often supplied a quarter horsepower, 115-volt, split phase AC motor. Often, the quarter horse motor would be replaced by a third horsepower motor and the aforementioned 4-in. motor pulley or drive sheave. Ideally, during the fall furnace maintenance, the drive sheave should have been opened a few turns slowing the fan thus increasing the furnace temperature rise.

As central cooling became more popular, furnace manufacturers developed furnaces and air handlers more attuned to add-on cooling systems; one of the most important improvements from that era had to be the direct drive fan assembly incorporating a Permanent Split Capacitor (PSC) motor. No more belts or pulleys combined with multiple motor speed taps meant fan speeds could be tailored for heating and cooling needs. Figures 1 and 2 below show a resilient mount PSC motor drive assembly.

PSC blower motors provided good service for decades. However, PSC motors can, at best, convert roughly 65% of their electrical input into mechanical work.

PSC motors suffer from asynchronous alignment, that is, the rotor constantly lags the magnetic field in the stator. Known as slippage, it means that a six pole PSC motor, for example, should turn at 1200 rpm.

The equation is: Synchronous Motor rpm = AC Frequency (Hz) x 120, then divide by the number of poles in the motor.

Too much waste heat is the byproduct of slippage. PSC motors start abruptly adding stress to internal motor components and noise to the air handling system. Multi tap PSC motors must be carefully matched to the application as only minor changes in speed are possible.

Goodbye to the PSC Motor

In 2014, the U.S. Department of Energy (DOE) developed the Fan Efficiency Rating (FER) requiring furnace manufacturers to reduce fan electrical consumption by 40%. The FER standard came into effect on July 3, 2019. 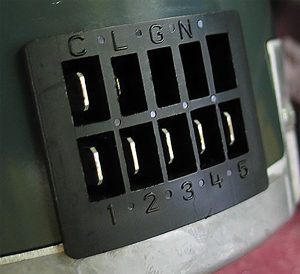 Since then, residential gas furnaces and air handlers have been equipped with lower wattage electrically commutated motors (ECM) or constant torque motors (CTM). To help unload the overburdened electrical grid, DOE estimates efficient furnace fans alone will save approximately 3.99 quads of electricity thus saving consumers more than $9 billion on their electricity bills through to the year 2030.

HVAC industry OEM’s have adopted the CTM (also known as a brushless DC motor, or by its original moniker the X13 motor) in furnaces and air handlers since the inception of the FER rating standard in July 2019. 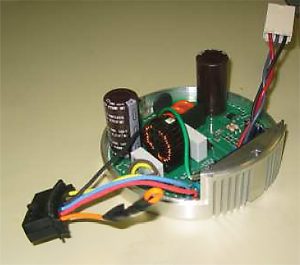 A look inside a typical CTM controller.

CTM’s are computer controlled and optimized around the principle of constant torque. Manufacturers test their furnace and air handler designs learning exactly how much torque the motor must provide to keep the centrifugal blower moving the necessary amount of air under all rated conditions.

The data collected is programmed into the motor computer. CTM’s provide several benefits over PSC motors and have similar characteristics to the more complex variable speed ECMs.

Developed by General Electric in the late ‘90’s, ECM’s have become the gold standard for improved efficiency and more flexible operation in residential HVAC air handling devices. ECM’s have a long list of features:

Come and Get Yer ECM’s!

Since X13s, CTMs and ECMs are brushless 3-phase DC motors with permanent magnet rotors, I’ll simply refer to all of them as ECM. Who would not want such an efficient motor driving a residential central air conditioning system?

Indeed, HVAC service contractors encounter failed PSC fan motors every day, and with heating season coming on, it might be the time to stock several replacement units for customers interested in saving energy.

Is It Worth the Upsell?

The value proposition should go both ways; a great line item producing extra revenues for the contractor while fulfilling the promise of better performance, less noise, and reduced energy bills for the homeowner.

Thanks again to YouTube, motor manufacturers have created many useful training videos on how to replace PSC motors with an ECM. However, I would argue that a professionally-trained technician, well versed in the anomalies of substandard air handling systems, should be able to recognize that a dysfunctional duct system is not a worthwhile candidate for a motor efficiency upgrade.

The chart above shows what happens to a variable speed ECM installed in a restrictive duct system. Notice the difference between motor watts at the manufacturer rated External Static Pressure (ESP) of 0.5-inch w.c. using the lowest possible heating speed on first stage, and the watts used in an overly restrictive system at 0.9-in. w.c.

A constant volume ECM will ramp up in a futile attempt to maintain programmed airflow. ECM powered fans, starved of air, will simply move whatever amount of air they can get at a higher velocity creating more noise.

In the end, we are all fortunate that Mr. Leppert’s ficticious Uncomfortable Air Conditioning Company does not have a contractor’s division around here, yet, far too many HVAC systems could qualify as Uncomfortable.

When it comes to replacing a PSC motor in an orphaned residential application, the technician needs to take basic system health measurements and then ask some important questions:

Too many negative responses to the above might mean a PSC motor is going to be the best replacement scenario.

Even better though, such systems should trigger a sales opportunity to replace the furnace and repair the air handling system so that a well-equipped furnace or air handler utilizing the latest ECM technology can provide the best value for the homeowner. <> 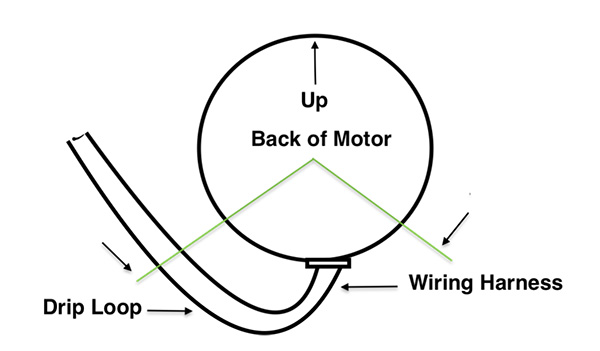 As installed in the air handler, the motor should be positioned with the connectors facing down between the 4 and 8 o’clock position, with the wiring harness formed into a drip loop. 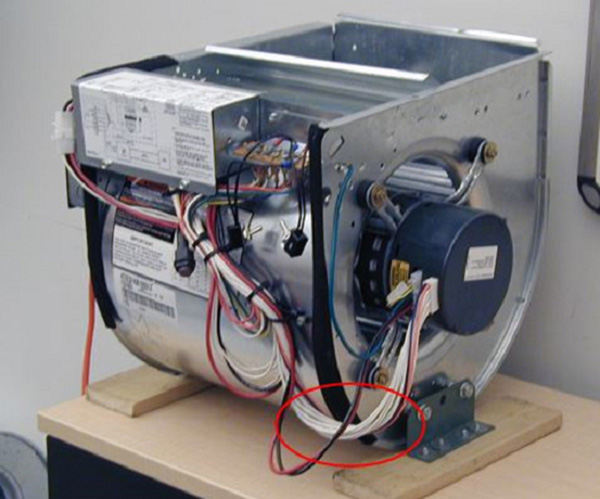 See the motor connection harness facing down with the drip loop on this OEM blower set-up. Drip loop prevents water dripping in the blower compartment from above making its way into the motor electronics. 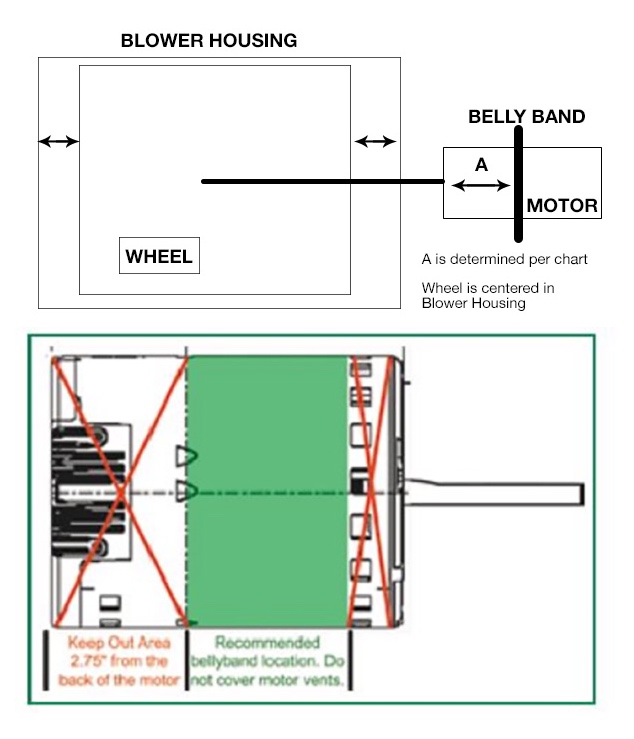 Motor insertion depth is important. Follow manufacturer’s instructions when installing replacement belly band mounts. Motors inserted too far into the fan, or not far enough, may cause the blower wheel to wobble causing noise, vibration and possible wheel failure.