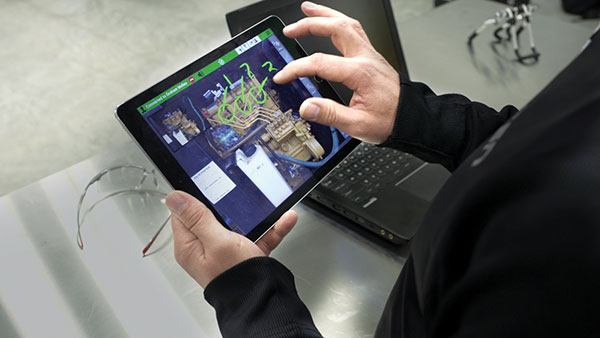 Despite being largely relegated to the classroom, augmented reality and virtual reality offer mechanical contractors a number of benefits in the field.

Troubleshooting equipment with a smart phone and viewing the layout of a system on a construction site in real-time are just two key advantages for the trades. Though, while some sectors such as manufacturing have adopted the technology, the mechanical industry–with some exceptions–has yet to fully embrace AR and VR.

The barriers that have long left smaller contractor shops on the sidelines are being increasingly dismantled thanks to the unstoppable rise of AR and VR, which has given way to reduced costs and improved accessibility. With the potential to propel a traditional industry into the future, this may be the best time for a mechanical business to dip its toes in the water.

Virtual reality and augmented reality technologies in the mechanical sector are designed to offer contractors a leg up, namely saving time in the field.

Edmonton, AB-based ScopeAR has developed AR technology that lends itself to the mechanical industry–though, the company’s clientele is primarily in manufacturing and aerospace, according to Scott Montgomerie, the founder, CEO and chief technology officer. Despite the benefits, he said the HVAC industry has been less receptive.

“Businesses that don’t adapt to new technologies are going to get left behind by a company that is,” he added.

Since 2011, ScopeAR has rolled out two augmented reality products in the space: Remote AR and WorkLink. The former has the ability to connect remote workers, such as a contractor in the field troubleshooting a piece of HVAC equipment, with an expert through a digital app.

“With our tool, you would be able to circle [a] red wire with a line in 3D space [for example],” Montgomerie explained. That circle is then visible to the expert in real-time.

“It enhances that ability to communicate between that person with knowledge and technicians,” he added.

WorkLink, on the other hand, allows the user to create “smart instructions,” as opposed to paper instructions, in augmented reality

“What that means is essentially overlaying rich 3D models on top of a piece of equipment to show you step by step how to do something,” Montgomerie said. “If you’re looking at a wiring panel on a furnace, you can actually see a 3D illustration of the circuit board with 3D representations of the wires, the layout. It’s really intuitive.”

In a 2016 study out of the University of Connecticut, former PhD candidate Rajeev Ghimire–now an electrical engineer–found that augmented-reality based troubleshooting of HVAC systems allowed technicians to improve efficiency on the job.
At the time, he said the school had difficulties troubleshooting equipment, with technicians often unable to determine the cause of malfunction or failure.

For the study, technicians performed tests and repairs on equipment while wearing the Epson Moverio BT-200 and Google Smart Glass AR glasses.

“The idea was to use augmented reality-based smart glasses to help the repair technicians collectively do the guided troubleshooting first,” Ghimire said, with the second component of the study being the repair process.

The technology allowed technicians to be more efficient, ultimately minimizing the system’s downtime and eliminating the need for manuals and other paperwork.

“There is a lot of attention on this one in repair and maintenance industry, whether it be HVAC system or any other complex cyber-physical system, complex engineering system,” Ghimire said. “I hope to see this one come to industry sooner than later. This is a very promising technology.” 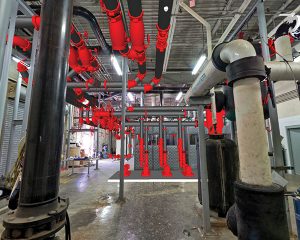 The use of scanning technology with augmented reality to overlay piping systems into a scanned room. Photo Victaulic

VR goggles and AR apps might not be present in the majority of mechanical contracting businesses just yet, but there are a few companies taking the technology to a new level. At Victaulic, VR allows the manufacturer–and its customers–to better visualize a space.

“We adopted it into our workflow as a visualization tool. We take our Revit models, we put them into VR, and then our teams can actually walk through their models,” Melissa Lampi, marketing communications specialist at Victaulic, said. “Then we actually started allowing our customers to visualize with it.”

According to Lampi, visualizing a space allows the user to better understand how a system will need to be maintained.

“When you’re not really seeing it spatially in that regard, it is more difficult to have a whole understanding of how it is actually going to be serviced,” she said.

Though, Victaulic isn’t the only company leveraging the technology in the field. Trimble, a construction software company headquartered in California, has planted its flag at the crossroads of AR and VR: Mixed-Reality.

Trimble Connect, its cloud-based platform for the construction industry–offered not only to general contractors but the sub-trades, architects, engineers and owners on a project–is “a repository for putting all the documentation, the 3D models… in one central location,” David Burczyk, segment manager of the field technology group for Trimble Buildings, said.

The 3D models generated for the project are combined into a composite construction model in Connect, which can then be viewed in the field with the Connect for HoloLens application, which uses Microsoft HoloLens technology.

“You go to the job site, you download the models that you created in Trimble Connect and then you can then blow out the modules full-scale and align it to the job site to be able to interact with both the digital and the physical environment at the same time,” Burczyk said. “It’s a Mixed Reality application.”

“A lot of what we’ve been doing for developing the product itself stems from conversations I’ve had with mechanical contractors,” he said. “They can go out, get the model lined up, have the craft workers on the team place the devices on their head and they can see exactly what they’re going to be building before they actually build it.”

For Lampi, the next big trend in AR and VR will be 3D scanning, particularly in retrofit projects or projects with special restraints.

“You can walk a room in VR with augmented spaces in there, meaning that your piping system is laid out over your scan, and now you just have a whole new realm of what your realistic room is going to look like,” she said of 3D scanning. While exciting, the rapid evolution of AR and VR can make it difficult for contractors to keep the pace.

Lampi said the barrier to entry for the trades used to be cost, but now the software is increasingly less expensive. Today, the biggest barrier is that the technology might seem intimidating to the industry–but key to accessing the benefits is to just get started.

“The early adopters of the technology are going to drive those that are a little bit more hesitant to try it,” she said. “It’s just about getting everyone to dive in.” <>

Motion sickness is poised to throw a wrench into the seemingly unstoppable rise of virtual reality, including its use among mechanical contractors.
Cyber sickness, or virtual reality motion sickness, can induce nausea and discomfort in individuals after they have participated in immersive virtual reality. The ailment’s debilitating effects raise health and safety concerns for contractors who use virtual reality in the field or for training.
Séamas Weech, postdoctoral researcher at the University of Waterloo Department of Kinesiology, is co-author of a recent study out of the university that hopes to predict and combat cyber sickness.

Cyber sickness can last for an hour after using virtual reality, affecting balance, retention of information and fine motor control. Contractors using the technology may opt to terminate the experience or take breaks in the middle of a task.

“Not only can it be an unpleasant experience for the person experiencing it but it can also be catastrophic for their ability to perform especially in high-stress situations like doing an installation,” he said. “When you’re experiencing cyber-sickness you’re much less stable than you would normally be. This could be quite a serious problem if an individual is in a situation where they need to maintain stability in order to be safe.”
Not all is lost, though. The study offers insight into how cyber sickness can be predicted and counteracted, so users can access the slew of benefits offered by virtual reality through a more tailored experience.

“The upside of the immersive virtual reality experience [is that] you can more naturally interact with your environment… You get better memory for the layout of a system, the parts of a system, and your learning will likely transfer well to the real world,” Weech said.

VR is fully immersive. Users don a head-mounted display and other electronic equipment, such as gloves fitted with sensors, in order to be “transported” to a computer-generated simulation of a three-dimensional image or environment.

AR, on the other hand, involves the use of technology–such as a smartphone or tablet app–to superimpose a computer-generated image over the natural environment.

Mixed reality–a term gaining more traction–sits somewhere in the middle. It allows the user to experience virtual objects in the real world.