Back in the Day

Retelling of an early service call to solve a grocery store’s meat freezing issue that required deductive reasoning, a look at the manuals and a sense of touch. 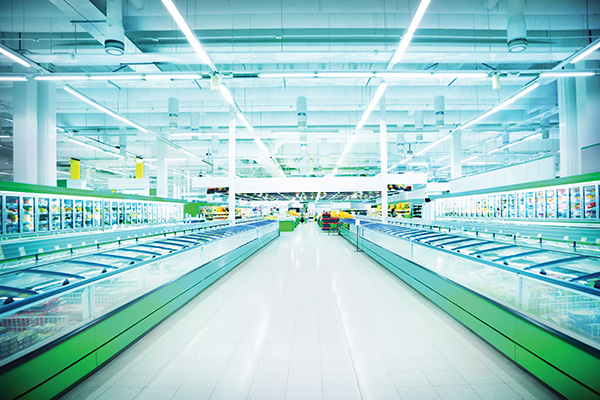 In spite of my newly-earned engineering degree, I just didn’t fancy myself sitting behind a desk. I like working with my hands, and I was very intrigued to gain a real-world experience to complement my book-learning experience.

In my early technician career I was employed by a large contractor whose main focus of business was supermarkets.

One particular day I was sent to the QFI supermarket in San Mateo, California. The complaint: the fresh meat was freezing.

Now, this was an older store that was probably built in the 1960s. Their equipment was not “state of the art”. Each system had its own separate condensing unit, and the controls were simplistic. This particular system was utilizing R-12, and the method of temperature control was simply a low-pressure control.

However, the best control will always be maintained when sensing the particular parameter which is to be maintained (as opposed to sensing a parameter that has a correlation to the parameter being maintained).

After connecting my gauges, I found that the compressor was chugging along at a suction pressure of 21psi (20F). This was nowhere near the 14 psi cut-out, yet the discharge air in the display case was low enough to freeze the meat.

There are several things which will determine the compressor motor amperage; voltage supply, voltage drop (due to excessive resistance in the wire connections or starter contacts), and anything that increases the load on the motor—internal compressor resistance (bearings and/or rings), and changes in suction and/or discharge pressure (which influences the compression load on the pistons).

Referring to the specification chart for the 9RS3-076A-TFC (Figure 1, below), for varying SST and SCT conditions, it lists the following compressor performance specifications: 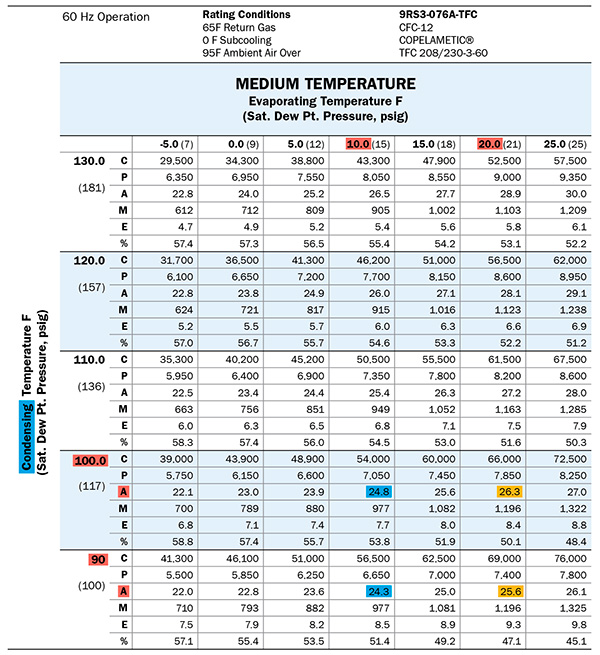 We are focusing on compressor motor amperage, specifically in tandem with SST and SCT.

All other system parameters remaining equal:

Something did not add up, as the amperage was much lower than the manufacturer’s data states it should have been. A series of logical deductions, based on the data, will suggest the cause:

My deduction was that one of the three cylinders was not doing any work. That would explain the lukewarm head, the reduced amperage, and depending on the cause of the ineffective cylinder, could also explain the vibration.

Removing the compressor head revealed that the front cylinder was half full of oil. On these smaller semi-hermetic compressors you can alternately push down on one cylinder, then another, and it will turn the crankshaft. Doing this revealed that pistons #2 and #3 were connected to the crankshaft, and moving up/down along with the crankshaft rotation. But piston #1 never moved. 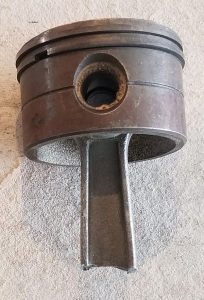 The interesting thing about this broken connecting rod is that it happened in such a manner that the compressor was able to continue to rotate without any obstruction from the broken parts. The remaining attached portion of the rod on the crankshaft caused an imbalance which resulted in the compressor vibration.

But, this caused the normally 34F meat in the display case to freeze. How could this happen?

The compressor was a little oversized for the application, so the loss of 1/3 of the compressor capacity didn’t result in the product never reaching its desired temperature. The real cause of the freezing was the fact that a low-pressure control was used as the means for maintaining temperature.

With the broken connecting rod, the compressor did not have enough capacity to bring the system down to the cut-out point. So, it operated non-stop, with 28F air blowing on the fresh meat all day long (except during the periodic defrost cycles). Of course, the meat froze.

To take this a step further, had the means of temperature control been a thermostat, this likely would not have resulted in a service call.

But, it did result in a service call. And, it provided a good opportunity for a young technician to learn a little more about troubleshooting, analytical thinking, and not giving up until a cause was found.

And the experience also illustrated the benefit in using the manufacturer’s performance data as a comparative means to determine how your equipment is performing. <>