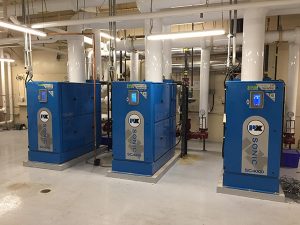 Most modern boilers have a level of modulation embedded in their design. Photo Courtesy Smith Energy-Moss Park Armoury

The benefits of boiler modulation are threefold; it reduces cycle losses, it reduces the wear on the components, and it can (but not necessarily as shown later in this article) result in higher thermal efficiencies. But aside from the benefits, what are the impacts of firing rate modulation on gas fired hot water boilers? When does boiler modulation leads to a decrease in efficiency and risk of equipment damage?

To understand these issues it is necessary to review how a boiler functions and the losses associated with its operation.

The actual combustion process leads to the formation of other byproducts or products in different concentrations than those highlighted above. These include:

Almost all boilers are tuned to add excess air to ensure proper air-fuel mixing and complete combustion of the fuel. Excess air is also added to prevent the burner from overheating when the flame sits on the burner surface. Higher air-gas mixtures “push” the combustion flame off the burner thereby reducing the burner temperature. 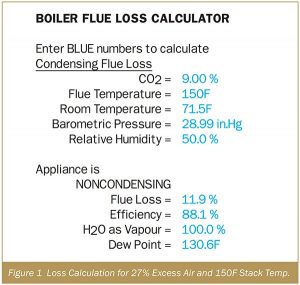 The dry flue losses and loss from the water vapour can be readily calculated if the amount of CO2 or 02 in the flue gas is known (this is used to calculate the dew point for the water in the flue gas and to determine the concentrations of the hot gas products) and the stack temperature is known. Two examples are provided in Figures 1 and 2 where natural gas is assumed as the fuel source. 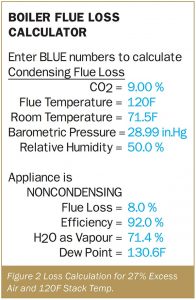 Figure 1 is the calculation of losses assuming 27 per cent excess air (equates to a CO2 of nine per cent) and a flue gas temperature of 150F. Note that the dew point for the gas at this level of excess air is 130.6 degrees – any flue gas temperature (and by extension return water boiler temperature) above this point will not result in condensation of the flue gas. The total steady state efficiency of the boiler (neglecting radiant and other minor losses) operating at this point is 88.1 per cent.

Figure 2 assumes the same conditions of Figure 1, however the flue gas temperature has been reduced to 120F. This results in an efficiency of 92 per cent or an efficiency improvement of 3.9 per cent. This increase is due to the added energy from the latent heat of vaporization in the flue gas water.

Boiler heat exchangers are designed to optimize the transfer of the hot gas thermal energy into the boiler water. The amount of heat transferred in this process is represented by:

U= overall coefficient of the heat exchanger

A= effective heat transfer area in the heat exchanger

This article will not explore the detailed elements of this heat transfer; rather it will review the major elements impacting the transfer of heat. In essence, any improvement to U, A, or greater temperature differences leads to more heat transfer and higher boiler efficiencies.

U, the overall coefficient, is inversely proportional to the resistance of heat flow in the heat exchanger (i.e. U = 1/Resistance). The itemized resistances to heat flow include:

The last point in describing basic boiler operations is describing a typical boiler cycle for a fan assisted or positively pressured boiler. Each time a boiler is activated it will undergo a pre purge cycle to remove any residual gases within the combustion chamber. This is done for safety reasons and is accomplished by flowing combustion air without fuel for a set period of time. During this process heat is being transferred from the hot boiler water within the heat exchanger to the cooler combustion air stream. This heat transfer is an energy loss but is needed again for safety reasons. Following the purge cycle, fuel is added to the combustion air, the mixture is ignited and the boiler begins its normal course of operations. Once the boiler is deactivated, a post purge is performed to remove any residual gases. These purge processes are the main driver in cycle losses which reduce the overall efficiency of the boiler plant.

Why modulation? In the past boilers were designed with only one mode of operation – on/off. They were not designed to fire at any other rate than their full rated capacity. When the heating needs for a facility were less than the capacity of the boiler, the boilers would undergo cycling where they would activate, satisfy the load then deactivate. The greater the difference between the heating load and the boiler output, the greater the number of boiler cycles.

As mentioned previously, excessive boiler cycles produce cycle losses but they also add to the general wear and tear of the equipment. The relays and contacts in the electrical components a limited number they can endure and these components will need to be replaced at a greater frequency when excessive cycling is experienced. 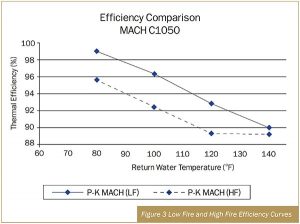 As innovation was added into boiler designs, manufacturers began offering units with multiple firing rates (multiple staged firing) followed by units that could modulate seamlessly between a fixed low fire rate and a high fire rate. On fan-equipped boilers, modulation is accomplished by reducing the air and gas flow into the boiler. The ratio of the low fire to high fire rates is defined as the boiler’s turndown capability. Most modern designs have a level of modulation embedded in their design; either with boiler units that have appropriate turn down or by using multiple on/off boilers.

When we look at the heat transfer equation provided previously, boiler modulation equates to more effective surface heat transfer area (A) for the amount of heat added into the system. This effect is illustrated on the efficiency curves in Figure 3.

Bringing it all together – impact of high turndown rates

From the preceding discussions it would appear that higher boiler modulation is better. This begs the fundamental question – wouldn’t a boiler with extreme turndowns be much more efficient than one with 5: 1 turndown? The answer to that is not necessarily, as shown below.

To achieve extreme turndowns high turndown boilers are tuned to deliver a greater amount of excess air at those low firing rates in order to keep their burner cool. That additional excess air significantly reduces the dew point of the water in the flue gas and also alters the losses in the dry gases as well. To illustrate this effect, the example used in Figure 2 is updated to reflect a 20:1 turn down where the 02 is set to 11 per cent (corresponding to a CO2 of 5.6 per cent and 97 per cent excess air). The results are highlighted in Figure 4 below. 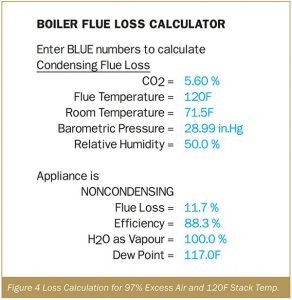 Note that the dew point has been lowered from 130.6 degrees to 117 degrees and the boiler is no longer in the condensing range. This represents a 3.7 per cent decrease in overall efficiency and this is just the beginning of the bad news. In reducing the overall gas flow in extreme modulation there is the possibility that the gas flow over the heat exchanger goes laminar due to the significantly reduced airflows. If the boiler circulation water is similarly reduced to follow the firing rate, the water side flow could go laminar as well. If the primary resistance to heat flow is from the gas and water side heat convection and if one or more of those resistances are increased by a factor of five then the entire performance of the heat exchanger drops significantly.

The end result would be rising flue gas temperatures and higher boiler losses. There are other negative ramifications as well. If the water side flow does go laminar the temperature of the heat exchanger material will rise. If it rises enough it may cause localized boiling in areas along the heat exchanger wall. As those steam bubbles form the dissolved solids in the boiler water will come out of solution and bake onto the heat exchanger wall resulting in an increased fouling layer. That layer adds additional resistance to the heat flow thereby encouraging more steaming. If the temperatures creep high enough the heat exchanger will fail because the boiler water provides the necessary cooling to protect it from damage.
A last major area of impact is in flame management. When excess air well above 50 per cent is used in the boiler it impacts the stability of the combustion flame which can lead to excessive flame failures, nuisance trips and cycle losses.

Suggestions are being made in the market however that the steady state losses incurred from the high boiler modulation rates overshadow the cycle losses that develop from 5:1 modulating boilers. Johnston Boiler Company released a study on just such a scenario, which highlights that even with the resultant cycle losses, a 4:1 turndown boiler would be more efficient than an identical boiler fired at 10 per cent of full fire.1 Because of the dramatic drop in efficiency and potential damage to the boiler, some manufacturers intentionally limit their boilers’ turndown rate to 5:1 and have the lab tests to demonstrate the true efficiency of the boilers at the different firing rates. These are not extrapolated efficiency numbers using one data point at a higher firing rate and then extended out into the lower firing rates. The way to really know what the efficiencies are at any of the firing conditions is to ask for the direct lab results at those operating points and not accept projected or estimated numbers.

Realistic boiler modulation rates have helped improve the overall boiler system efficiency from reduced cycle losses and increased thermal efficiencies but extreme turndown (above 10:1 and higher) may produce the opposite effect. Prudent boiler plant designs must factor in actual (not extrapolated) boiler efficiencies through the firing range of the equipment and matching the expected plant loads with the right boiler size selections.