The Canadian Apprenticeship Forum’s (CAF), Ontario roundtable entitled Achieving Certification: Helping Apprentices Cross the Finish Line, attracted attendees from across the country to discuss statistics, stigmas and opportunities for trades apprentices on February 26 in Toronto, ON.

The chair of the Ontario College of Trades (OCOT), Pat Blackwood said, “Canada will continue to lose hundreds of thousands of workers in the skilled trades jobs in upcoming years.” He explained that there is a social status stigma that surrounds the skilled trades, however OCOT is working to diminish this out-dated perception and show kids the “coolness” behind the trades. For example, the Tune In Trade Up! campaign seeks to highlight the skilled trade careers within the music industry. It has partnered with the Boots and Hearts music festivals to show young people, through a video available online, the opportunities in trade work.

A presentation on the impact of certification on income for trades workers offered some relatively recent data and generated lots of discussion from roundtable attendees. The presentation was led by Harry Krashinsky, associate professor for labour economics and applied econometrics at the University of Toronto, and his partner and fellow University of Toronto professor, Morley Gunderson, who holds the CIBC chair in youth employment, also attended.

Krashinsky said that prior to 2006, there were no large data sets available for people who completed apprenticeships. This lack of data made researching the impacts of apprenticeships quite difficult, “But in 2006, apprentices became separately identified for the first time,” he said.

The benefit of this is that after 2006, a large representative data set became available to research. The goal of this research was to use the 2006 census to compare those who complete an apprenticeship program to other educational groups: such as high school graduates who enter into the trades; those who possess a trade certificate; and those who graduate from college. 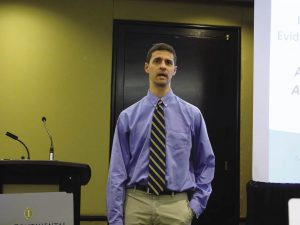 “For men, if you complete the apprenticeship program, they do better than those who are right out of high school and those who possess a trade certificate,” Krashinsky said. “They fare better.”

He added that the results for men who complete the apprenticeship program more closely represent the economic status of those who graduate from college, demonstrating that completing an apprenticeship program has a financial benefit compared to trades workers who enter the workforce with only a high school diploma or trades certificate.

However, the results of Gunderson and Krashinsky’s economic findings for women who complete an apprenticeship program differ. “Women do not seem to be doing as well when they come out of the apprenticeship program,” Krashinsky said, noting that more research is needed to better explain the reason(s) behind this. One suggestion from the audience was to do a sector-to-sector breakdown because, for example, the higher paying trade of construction is predominantly comprised of men and could alter the economic results.

The next step in the research is a Social Sciences and Humanities Research Council (SSHRC) partnership grant application with the Canadian Apprenticeship Forum (CAF). This will allow Gunderson and Krashinsky to further examine these differences in economics. Data matching is expected to begin within a year.

Following Gunderson and Krashinsky’s presentation, Sarah Watts-Rynard, executive director, CAF, discussed the journeyperson perspectives on the benefits of certification. “Surveys with youth and their parents suggest concern that careers in the skilled trades are seen as dead end jobs, which is not the case,” said Watts-Rynard. She explained that some common concerns include a lack of clarity around the process to become an apprentice, and added that mentoring programs need more structure and consistency.

A stakeholder panel with speakers Royden Trainor, director, policy and programs, OCOT; Matt Foran, manager, academic upgrading programs at George Brown College; and Erik Hueglin, director of apprenticeship, joint apprenticeship council, Greater Toronto Electrical Contractors Association (GTECA), shared some initiatives designed to support apprentices in their efforts to pass exams. Initiatives discussed included working with apprentices from the start to finish of their programs, and offering counselling throughout their training to help gauge how they are doing and address concerns.

“Keeping apprentices in the system is extremely important. Getting them there is big, but keeping them [there] is crucial,” said Trainor.

A roundtable discussion with attendees offered some suggestions to make the trades a more accessible career choice. Restructuring education in high schools to make students aware of trade options, as well as improving mentorship and creating opportunities for employment were among the topics discussed. www.collegeoftrades.ca  www.caf-fca.org   www.earnwhileyoulearn.ca/tunein