Can Boilers Be “Resilient?” 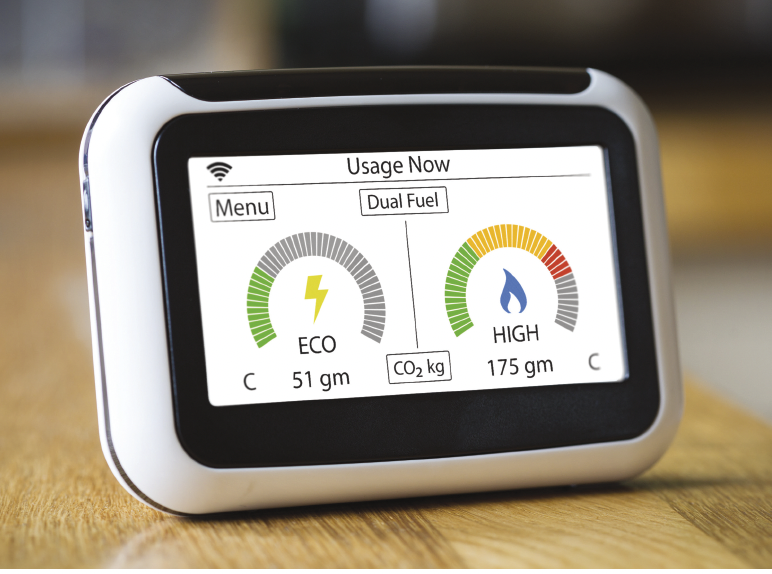 Ever notice how new words or phrases continually slide into our social vocabulary?

A few examples that pertain to energy and buildings include: sustainability, energy justice, climate justice, beneficial electrification and decarbonization.

Another contemporary term that’s currently popping up in a variety of communications is “resiliency.”

It’s meant to convey the concept that buildings and their environmental control systems should be able to maintain near normal operation under abnormal conditions such as extended power outages, temperature extremes, strong storms or supply chain interruptions.

Resiliency is a very desirable and rational concept. Think back to the winter of 2020-21 where a strong “polar vortex” storm caused massive damage in Texas knocking out power for weeks.

That storm started a domino effect leading to frozen pipes, natural gas interruptions, inoperable sewer systems, and intolerable temperatures in tens of thousands of homes and buildings. This event and its aftermath demonstrated an abysmal lack of “resiliency.”

The aspirations of those who advocate for a complete and expedited switch from fossil fuels in favour of complete electrification of HVAC systems sometimes overlook situations that are inherently resilient.

One example is a belief, by some, that existing fossil fuel heating systems, such as boilers fired by natural gas, fuel oil, or propane, should be scrapped ASAP and their function replaced by an electrically-driven heat pump with electric resistance backup.

This concept is short-sighted from several perspectives:

First, assuming that the boiler is functional, serviceable, and has been maintaining comfort in the building, leaving it in place allows for supplemental heating.

This helps reduce the emerging peak power demand scenarios that many electric utilities will soon face as more buildings go over to all-electric heating. It also reduces demand charges in commercial buildings.

Based on simulations I’ve been working on, an air-to-water heat pump could provide between 70% to 97% of the total seasonal heating energy in a home equipped with hydronic heat.

There are many factors that collectively determine just how much of the seasonal space heating energy can be supplied by the heat pump, but the take-away here is that the majority of this energy is supplied by electricity rather than on-site fossil fuel. Isn’t that the primary goal of electrification?

Second, leaving the existing fossil fuel boiler in place allows for full capacity backup if the heat pump is down for service. Granted, heat pumps have improved a lot since their introduction in the 1970s, still, modern heat pumps are a complex assembly of components, many of which are separated from the outdoor environment by little more than a sheet metal cabinet.

It’s unrealistic to think that any device of such complexity, and operating in an outdoor environment, will make it through 15 to 20 years of operation without a single service issue that will temporarily shut it down.

If it’s the sole heat source for the building things are likely to cool off (or worse – freeze up) before the heat pump can be put back in operation, and that’s definitely not resilient.

Third, most fossil fuel boilers and their distribution systems can operate on a few hundred watts of power. A small and relatively inexpensive portable generator could keep most fossil-fuel heating systems in residential and light commercial buildings operating during a prolonged power outage.

Buildings with heat pumps and electric resistance backup can also be maintained by emergency generators, but will require much larger and more expensive systems.

Fourth, the combination of a heat pump (air-to-water or geothermal water-to-water) with an existing fossil fuel boiler provides time-of-use flexibility. The fossil fuel boiler could be used at times when peak electric rates are in effect, or times when utilities experience peak demand and need to shed load through pre-established agreements.

Fifth, there’s obviously a cost associated with removing a boiler and its piping, fuel supply system, wiring and venting. Why add that to the upfront cost of installing the heat pump?

Keeping a functional fossil fuel boiler in a system as both a supplemental and backup heat source to a heat pump provides a transitional strategy toward increasing electrification.

When an air-to-water or water-to-water heat pump is added to an existing system, small piping modifications can be made that would allow an electric boiler to eventually replace the fossil fuel boiler without major system reconfiguration. 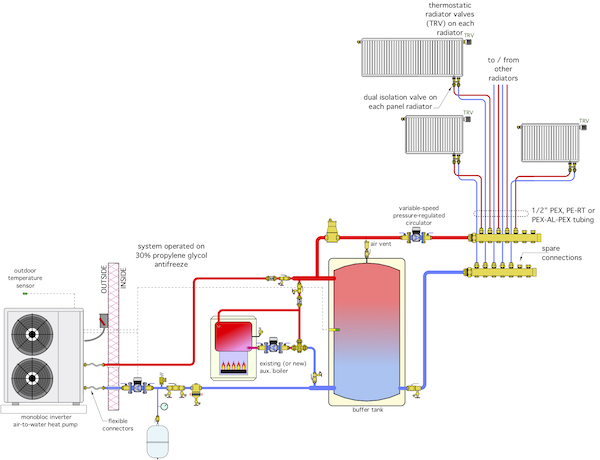 The diagram in Figure 1 (above) shows one possible configuration where a monobloc air-to-water heat pump and an existing (or new) boiler are piped in parallel.

If the system operates at lower temperatures (130F or lower) the boiler needs to be protected from sustained flue gas condensation. That’s easily handled by using a thermostatic “anti-condensation” valve.

The boiler and its circulator would only be operated when the heat pump cannot maintain an adequate temperature in the buffer tank. Off-the-shelf two-stage temperature controllers could automatically manage both heat sources based on either setpoint temperatures or outdoor reset control.

Thermostatic valves at each radiator regulate output. It’s a simple and repeatable concept that provides zone control without multiple thermostats.

I’m not against properly planned electrification. The eventual transition to heat pumps as the primary type of heat source for hydronic systems is a huge opportunity for the North American hydronics industry, probably the biggest that I’ve witnessed in over 40 years.

However, I’m also a “realist” in terms of rushed or all-or-nothing policies that overlook favourable opportunities.

Fossil-fuel should not be treated as “public enemy #1.” Its use is the underlying reason for the comfortable and arguably luxurious life style most North Americans enjoy in comparison with much of the world’s population.

Fossil fuel boilers, in both retrofit and new construction applications, complement the use of heat pumps, with the latter increasingly serving as the primary heat source.

Boilers and fossil fuel can “cover” for the vulnerabilities of heat pumps, while still allowing the long term goal of increased use of renewably-sourced electricity. As such they enhance the overall resiliency of the system. Hydronic professionals are in a perfect position to leverage this approach and profit from it. <>