.A zero-sweep PVC elbow often used in the non-certified old days. Very restrictive to flow, this design accounted for 10 equivalent feet of 2 in. pipe

Which 90 per cent AFUE furnace brand got into Canadian basements first? Perhaps it was Clare Brothers HEG series MegaSave furnace or maybe the Lennox G14 Pulse shared the limelight with Clare for first high efficiency gas furnace on the market, my memory fails me now. Venting with plastic pipe was the future, what could be simpler?

Builders loved the idea of eliminating chimney chases but what about that water heater vertical vent, can it go sidewall too? Yes, indeed! In Ontario, Saskatchewan and Alberta, the majority of new construction 90 per cent AFUE gas furnace and gas-fired hot water heating appliances became sidewall vented.

As is often the case in the residential HVAC industry, installers and technicians are frequently first exposed to new technology while on the job. When plastic pipe venting came along, it seemed anyone used to measuring, cutting and assembling threaded steel pipe or hard-drawn copper pipe would have no trouble in learning how to specify and how to install plastic vent systems. After all, wasn’t everything an installer needed to know about working with plastic materials and adhesives thoroughly explained in the installation instructions?

Perhaps things are different now, but in those days anything resembling paperwork left behind for the eventual homeowner (even if required by law) often ended-up in the dumpster bin as overly zealous cleaning crews hurried to make the place shine. Sometimes the installation instructions were used for other purposes.

As the production housing market ramped up, especially in 1980’s Ontario, installation crews rarely ever received in-house training on how to best deal with plastic materials. Installation crews raced from one house to another. Hurriedly assembled, ramshackle vent systems far too often generated failed utility inspections meaning no fuel would be supplied until the system passed inspection. Thus, the harried company service technician would be dispatched to re-vent the furnace (and hurry up, eh!) allowing the builder to use it for temporary construction heat–an unwise and ruinous practice in itself. 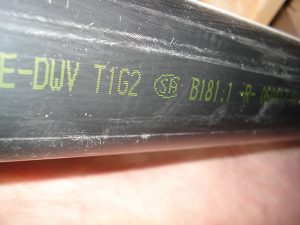 When re-using ABS material for combustion air in a retrofit situation, the pipe should be marked to show that it complies with the manufacturer’s installation instructions.

I have heard the vent repair story from technicians very often, even to this day. A similar situation happened to me: since the installers were busy working elsewhere on the site, I was dispatched to re-vent a newly-installed furnace that failed inspection for the same old reasons: no slope; not enough support; improper termination.

Fortunately, I had the installers guide, a box full of fittings, a hacksaw and miter box and, a friendly plumber finishing-up on the same job who kindly showed me how to run a proper slope to the furnace without stressing the pipe. Even after getting expert advice, I still managed to mess-up several joints because the adhesive set-up much faster than I had anticipated. And the smell, the odour of solvent cement seemed to be just as unpleasant as the incredibly acrid crud that necessarily gets removed from an oil furnace flue pipe.

PVC (polyvinyl chloride) material meeting ASTM D2665 (CSA B181.2) and stainless steel meeting Type AL-29 4C specification could have been used (sometimes these material were specified) although at a considerably higher price.

I typically do not try to second-guess scientists and engineers, especially when an unforeseen problem develops with any particular technology that requires intensive investigation and experimentation prior to determining the appropriate fix. Before 2007, I had not noticed any degradation of ABS venting material that might have led to disastrous consequences.

Yes, I dealt with vents that came apart due to improper solvent welding technique; improperly sloped/supported /terminated vents were too often problematic. However, Canadian plastic pipe manufacturers became alarmed as they had never tested their products for continued exposure to condensed flue products or raw natural and propane gas. It appears that many in the HVAC industry failed to notice a seemingly obscure addition to the CAN/CSA B149.1-M95 edition of the gas code published in 1996. Venting, in that edition of the code, came under section 7.0.

7.10.3: An appliance bearing a Special Venting System label similar to figure 7.10.3 shall be vented as applicable, with either

(a) a Type BH venting system complying with the ULC-S636 “Type BH Gas Venting Systems,” or

(b) a venting system certified as a component of the appliance and provided by the manufacturer.

Figure 7.10.3 referred to an appliance label requiring a Special Venting System that included flue gas temperature and vent pressure, whether positive or negative.

8.9.5 Venting systems or total vent run if less than 3 ft. (900 mm), that employ plastic vents shall be installed such that the first 3 ft. (900 mm) from the appliance outlet is readily accessible for visual inspection except for direct vent appliance such as fireplaces that are intended to have short vent lengths to be concealed for decorative purposes.

8.10.14 A Special Venting System shall neither pass through an unheated space nor be installed outdoors unless insulated in accordance with the appliance and/or vent manufacturer’s certified instructions.

7.10.4 Referred to water heaters vented with plastic pipe, however, in all my travels I do not recall ever seeing any plastic pipe with a temperature rating so marked. In January 2007, an engineer employed by TSSA noted in a letter to the Underwriters Laboratories of Canada (ULC) that ABS vents were failing at an alarming rate. The letter detailed results of studies undertaken by four water heater manufacturers starting in 1999.

Results of Manufacturer A’s Voluntary Program: “…revealed that approximately 90% of the 130,000 affected water heaters had cracked vents and approximately 20% had flue products escaping from the cracks. The vent cracking appeared to be related to the age of the installation.”

“While the main cause of the cracks was attributed to the design of the power vented water heater connection and the limited flexibility allowed by the connection, improper installations or poorly supported vent systems also increased the likelihood of vent separation.”

Manufacturer B’s program: Estimated that 47 per cent of 12,000 water heaters had cracks and 33 per cent found downstream of the power vent connection.

Manufacturer C: “Approximately 400 water heaters installations were retrofitted when a CO investigation revealed that the plastic pipe was melting and separating.”

Manufacturer D: Identified 150 water heaters with 3 in. ABS plastic vents that had cracks; the cause was not determined.

As a result, after years on the books, the ULC S636 standard for Type BH Special Venting Systems came into force on August 1, 2007. TSSA said, “The new plastic vent has been tested and certified specifically for its intended use to vent combustion products and is supported by plastics manufacturers.” TSSA decided the ULC S636 standard need only apply to new installations and was not retroactive.

TIPS FOR INSTALLERS AND TECHNICIANS

No doubt, there are plenty of ABS vented appliances still in operation today. TSSA said, “A current system can continue to be safely used so long as there is no evidence of cracks, deformation, melting or separation. The appliance and vent piping shall be maintained in accordance with the manufacturer’s instructions.”

Installers often face a difficult task when it comes to determining the route a vent system should take to its ultimate termination point. The well-established convention for all venting dictates the shortest route with the least number of elbows using the smallest material possible is ideal. However, in a real basement the route to the outdoors is often obstructed by ductwork, plumbing pipes, electrical wiring and various other elements of the building structure such as steel beams, flush beams, windows and doors.

The termination point outside may have numerous conflicts: the gas pressure regulator is too close, there are mechanical air inlets for other appliances nearby, a dryer vent is too close, there is not enough clearance to grade and finally, the customer does not want it there. In Alberta and Saskatchewan, gas appliances over 35K Btuh cannot be vented into an unobstructed space less than four feet from a property line, and, if the space is less than eight feet but more than four feet, a tee must be installed on the flue pipe so that condensate is directed sideways. What is an installer to do?

It seems obvious that pre-planning for the vent system taking into account the customer’s needs along with all related installation requirements must be part of the sales process; installers must not be left on their own to fabricate a potentially inappropriate vent system.

In TSSA’s informative Q&A letter dated April 10, 2007, this question was raised: “Does the combustion air piping need to be certified to ULC S636? Answer: “No – the combustion air pipe is not exposed to flue gases and does not need to be certified.” However, a gas code amendment in September of 2010 requires installers to follow the manufacturer’s certified installation instructions along with the Code and 4.1.4 Where a conflict exists between a manufacturer’s certified installation instructions and this Code, the most stringent of the two shall prevail.”

Typically gas appliance manufacturers direct installers to use ABS material meeting the ASTM standard D2661; in Canada CSA B181.1. With the most stringent rule in mind, installers intending to reuse an existing ABS inlet air pipe should check for the proper markings on the material not just the appropriate equivalent length, adequate support and proper termination. Otherwise, it is best to utilize S636 material for the inlet air as well.

I can hear the ground source heat pump and the cold climate heat pump community saying, “Use our products instead because venting is not an issue.” They may well have a point. Many investigations into poor performance and cold weather service interruptions plaguing sidewall vented condensing furnaces conducted by me and others reporting to me proved to be vent system or condensate drain related.

It is now wholly appropriate to offer consumers other combustion-free technologies in applications where proper venting cannot be guaranteed.