Water moves a lot more btu’s per pound than refrigerant, thus the commercial chiller is likely to be a viable HVAC product for the foreseeable future.

I will have to admit that my HVAC proclivities revolve around forced warm air heating systems combined with add-on cooling units. It’s the way I was raised in HVAC; in fact, water and its tendency to leak all over the place or to restrict and or to corrode furnace vents have produced no end of headaches for me when troubleshooting nuisance units.

Water can be a truly nasty chemical. Yes, I said it, a chemical. And it’s almost always referred to by its common name, “water”, as opposed to its systematic name, dihydrogen oxide.

But then again, who doesn’t love water for recreation, bathing and simply drinking?

Even the other products of combustion of natural gas combine with water forming weak acids that ruin heat exchangers, vent connectors and chimney liners, aargh!

Having said that, chemistry has also given us strategies to deal with the most annoying properties of water. And, there is one other phenomenal property of water that is foundational to the HVAC industry.

Once I started to take hydronic heating seriously, I learned from regular HPAC magazine contributor John Siegenthaler that “water is almost 3,500 times more ‘thermally concentrated’ than air, a hydronic system only has to move about 1/3,500 of the volume of fluid that a forced air system does to convey the same amount of heat.”

That heat can be used for space heating or process heating and, of course, heat absorbed into water can be effectively removed from any process or building as well.

Chillers have long been used in larger commercial buildings including high rise office towers, institutional buildings and process cooling applications. Sometimes the building requires cooling only, but typically in a cold climate the chiller will be combined with a boiler to provide heating and cooling using common piping suppling devices such as remote air handlers or terminal units within the space.

Interestingly, some buildings once thought to be perfect for combined chiller/boiler installations, are losing out to variable refrigerant flow (VRF) technology thanks to advancements in capabilities such as simultaneous heating or cooling utilizing variable speed compressors that provide significant energy savings.

Regardless, water still moves a lot more btu’s per pound than refrigerant, thus the commercial chiller is likely to be a viable HVAC product for the foreseeable future.

As far back as 1913, engineers have been concerned about the quantity and type of refrigerants used within confined building spaces. By 1978, ASHRAE and the American National Standards Institute (ANSI) had published a comprehensive document known as Standard 15 that specifies safe design, construction, installation, operation and maintenance of refrigeration systems.

Standard 15 aims to ensure that refrigerants will be kept within the system and, in the event of a leak, mitigation procedures will reduce or eliminate serious impacts on people. Standard 15 limits the quantity of refrigerant in direct systems and requires very large volume systems to be in machinery rooms.

ASHRAE Standard 34 is a companion document to Standard 15 that establishes a system to identify refrigerants by assigning reference numbers, establishing a safety classification and to publish refrigerant concentration limits (RCL).

Concentration means the full vaporization of a refrigerant released into a confined space without ventilation, dissolution or decomposition capabilities. System designers must make sure conditioned spaces do not exceed concentration limits. Refrigerant piping and tubing cannot be installed in prohibited spaces, such as, enclosed public stairways, shafts that have openings to living spaces or any means of building egress.

However, in low ambient applications, VRF heating capabilities may not be adequate requiring supplemental heating equipment and the installation and maintenance costs might not be worthwhile in some applications.

VRF systems also have strict run and rise tubing limitations that must not be ignored. Complex tubing systems must be installed by licensed, experienced installers; nitrogen must be present during the brazing process and the completed tubing must be evacuated and dehydrated in accordance with manufacturers requirements. 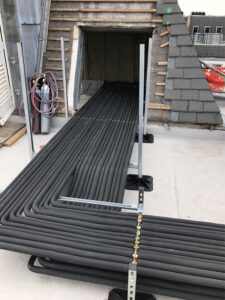 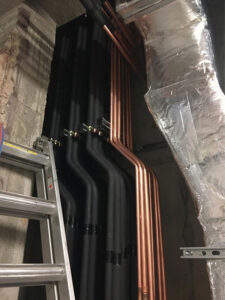 Granted, a residential or light commercial VRF system will never require the amount of tubing as shown in the photos above. However, its worth remembering the importance of line set tubing size, length and elevation above the compressor; these three factors, as prescribed by the equipment manufacturer, mean poor performance or, even worse, catastrophic compressor failure will otherwise result from poor piping practice.

Such requirements often lead to difficulties with outdoor unit placement not to mention line sets running all over the place outside the building. 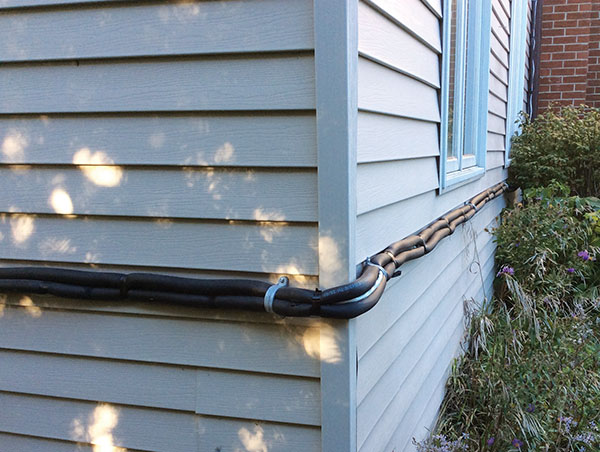 This single VRF line set above doesn’t exceed manufacturer recommendations for run and rise, yet it’s only part of a multiple indoor unit installation in which the total allowable tubing length for all piping is 197 ft. When counted in with the other line sets on this job, the total length of all piping is 212 ft. What sort of trouble might lay ahead for this system?

In cooling applications, chillers are not rated for seasonal energy efficiency ratio (SEER). Even a properly sized cooling system is oversized 99% of the time thus a chiller’s full speed efficiency is much less important than its average or part load efficiency.

Chillers are AHRI rated for Integrated Part Load Value (IPLV) based on a loop temperature of 44F. Manufacturers also offer a Non-Standard Part Load Value (NPLV) for situations where a 55F loop temperature can meet the requirements of a 44F loop and precautions have been taken to ensure proper dehumidification. A properly specified NPLV loop is dramatically more efficient than an IPLV loop.

A chiller’s IPLV is calculated using the AHRI 550/590 part load standard rather than the full-speed seasonal EER:

To roughly estimate the annual energy consumption of a 5-ton chiller (17.6 kW), with an AHRI rated IPLV COP of 4.56, use the following formula:

Compare with a similar 5-ton chiller rated at an ILPV COP of 3.17:

No doubt that selecting a modular chiller with the highest AHRI rated IPLV COP is the most efficient choice for any potential customer.

In residential applications, I have recommended using VRF technology over the practice of installing an evaporator coil onto a new or existing furnace because too many older duct systems cannot efficiently distribute conditioned air, neither in heating but especially not in cooling mode.

To me, it makes no sense installing a 20 SEER inverter drive conventional split system air conditioner into such a system because inadequate air flow means loss of efficiency—that the consumer is paying for!

A modular chiller fitted into a residential application using an insulated loop could easily support a variety of delivery options similar to a VRF system. Free of refrigerant piping concerns, chilled water can easily be zoned throughout the residence.

Similarly, in a light commercial application such as a strip mall or standalone structure such as a restaurant or gymnasium, I’m thinking a modular chiller would have a crucial installation and operational advantage over a traditional ducted rooftop unit or even a multi-head VRF system.

John Siegenthaler introduced to me the idea of a hydronic system as a “conveyor belt for btu’s.”

I now understand how inherently beneficial my old enemy [water] is at providing not only thermal comfort but exceptional energy savings too.

Water is the way to go!

Ian McTeer is an HVAC consultant with 35 years experience. He is a refrigeration mechanic and Class 1 Gas technician.