CO2 As A Refrigerant? Yes…CO2

There has been a move towards considering and using CO2 as a refrigerant in supermarket systems in the last several years. 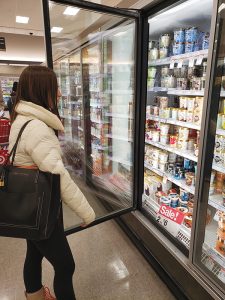 Certainly there has been a move towards considering and using CO2 as a refrigerant in supermarket systems in the last several years. The movement has seen a tremendous increase in use in Europe, and to a lesser degree it has seen an increase in Canada and the U.S. Yet, I’ll have to admit that I haven’t been too enamoured with CO2 … until recently.

In early February I was given the opportunity to present an overview of CO2 supermarket refrigeration systems for a couple of contracting groups, which provided me with the motivation to do some in-depth research on the subject.

So, given the fact that global warming—I mean, climate change—is not a topic that will leave the public eye any time soon, perhaps it’s timely to discuss the merits of CO2 as a refrigerant, along with discussing how it’s different than the refrigerants we’re using today.

As a preface to the CO2 discussion, let’s review how we got to the point that a refrigerant that fell out of favour in the 1960s was given a second life.

The first man-made glass of carbonated water, fit for human consumption, was created by Dr. Joseph Priestley in 1767. Later, in 1832, John Matthews invented an apparatus for making carbonated water which he began mass marketing, and at around the same time as CO2 was the gaining popularity as the ingredient that transformed ordinary water to “sparkling” water came the use of CO2 (R-744) as a refrigerant.

One of the marketed benefits of CO2, as compared to other contemporary refrigerants of the time (Sulfur Dioxide (SO2) or Ammonia (NH3)), was that it was non-flammable and non-toxic.

In addition to widespread use in the shipping industry, CO2 saw use in some commercial applications as well. It reached its heyday in the 1930’s. In the 1950’s we saw the introduction of Chlorofluorocarbon (CFC) refrigerants (R-11, R-12, R-502) into the marketplace which were a dagger to the heart of CO2. The 1960’s saw the end of CO2 as a viable option as a refrigerant.

Of course, as great as CFCs were from a practicality standpoint they had a problem. Scientists realized CFCs were contributing to the depletion of the ozone layer, which led to the development of the Montreal Protocol which went into effect in 1987. This international agreement established phase-out dates for CFCs, and this was followed by phase out dates for the lower ozone depletion potential (ODP) Hydrochlorofluorocarbon (HCFC) refrigerants like R-22. Next to come are the hydrofluorocarbon (HFC) refrigerants.

Interestingly enough, while HCFCs were less threatening to the ozone layer, in the 1990s these refrigerants were targeted as being contributors towards global warming….aka high GWP (global warming potential) refrigerants. The Kyoto Protocol, created in 1997, set reduction targets for greenhouse gases, which included HFCs. The Kigali Amendment to the Montreal Protocol outlines a phase down of HFCs. 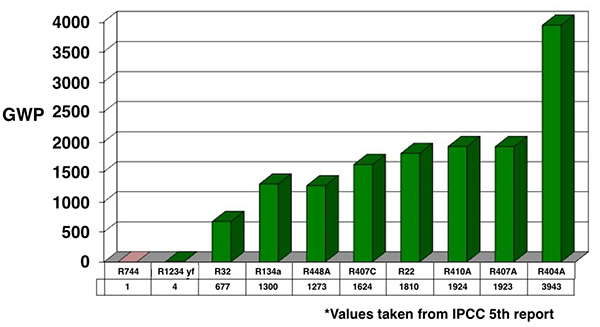 So, R-22’s GWP of 1810 means that a given mass of R-22 has 1,810 times the effect on global warming than an equal mass of CO2 does. For comparison, see the chart above (Figure 1) for GWP values of common refrigerants in use today.

The main drivers to determine which refrigerant might be the best choice going forward are as follows: environmental properties (low GWP); energy efficiency; safety (flammability and toxicity); cost; and availability.

Looking at CO2 through the lens of those drivers reveals it to be quite favourable: GWP = 1; under certain conditions it can be efficient; it is very safe; it’s quite inexpensive; and it is readily available.

In addition, some of the challenges that led to CO2’s demise in the 1960s, notably its extreme high pressure operation, have been overcome with new advances in technology.

There is no question that a CO2 system is going to be different than the typical refrigeration system that most supermarket technicians are familiar with today. So, let’s take a look at the similarities and the differences between working with CO2 verus your typical HCFC/HFC system.

So, while there are some very obvious differences between CO2 and HCFCs/HFCs, we’re still refrigerating. We’re still applying the same basic principles that are the basis for every vapour-compression cycle used to refrigerate.

But now let’s introduce some CO2 facts, relevant definitions, and explore some of the major differences between HCFC/HFC refrigerants and CO2: 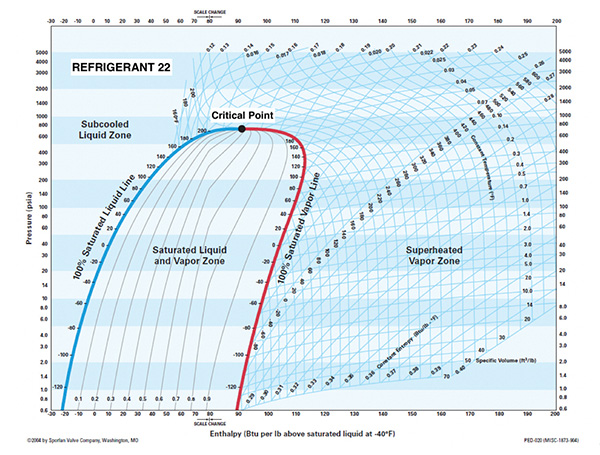 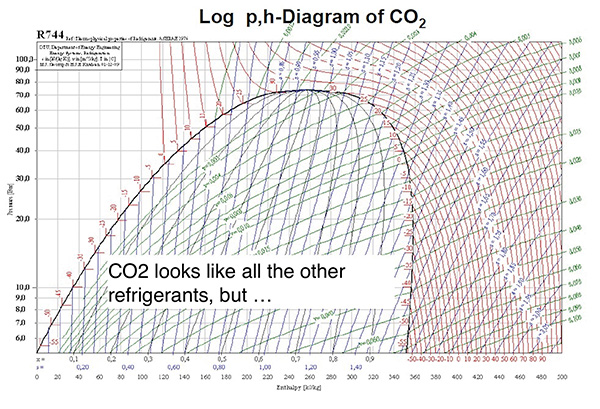 Critical Point: The point on a phase diagram at which the liquid phase and vapour phase of a substance have the same density (meaning they are indistinguishable). See Figure 2 and Figure 3 (above).

Critical Temperature: The maximum temperature at which a vapour can be converted into a liquid by increasing the vapour’s temperature. If the vapor is above the critical temperature, it cannot exist in the liquid state.

Critical Pressure: The pressure required to liquefy a gas at its critical temperature.

Triple Point: The temperature and pressure at which the solid phase, liquid phase and vapour phase of a pure substance can coexist in equilibrium. See Figure 4 (below). 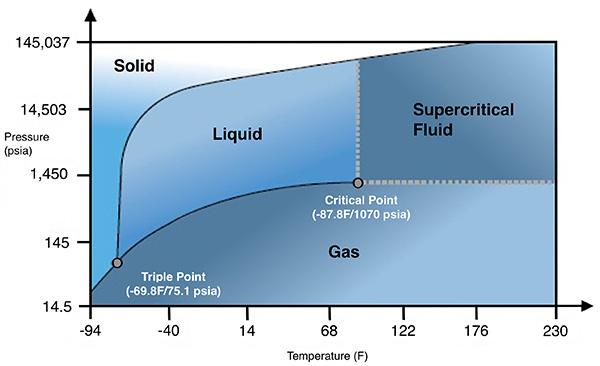 Sublimation: The transition of a substance from the solid phase directly into the vapour phase. Sublimation occurs at temperatures and pressures below the triple point.

Subcritical: CO2 Systems where the high side pressure is below the critical temperature (87.9F) and critical pressure (~1055 PSIG).

Transcritical: CO2 Systems that are designed to operate at pressures above the critical pressure of ~1055 PSIG. See Figure 5 (below). 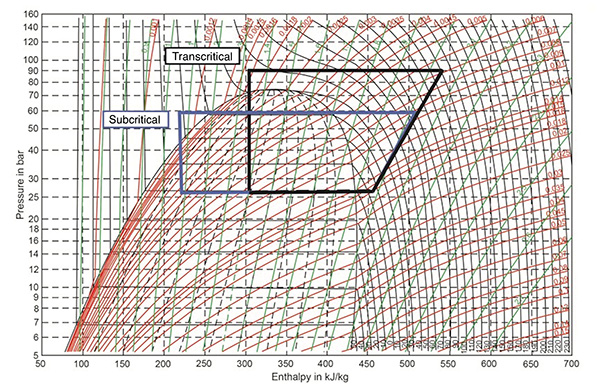 To put this into practical terms, if a condition ever existed in an R-22 system where the saturated condensing temperature was at 205.1F, the system high side pressure would need to be 723.7 PSIA for a change of state (vapour to liquid) to occur. This condition is never going to happen in an R-22 system.

So, while there are similarities between the more common HCFC/HFC refrigeration systems being used in supermarkets today and CO2 systems that are slowing coming on the scene, there are some very notable differences as well.

That’s all I have room for now, as this is a complex topic to explain. So please come by for part two of this article in the next issue where I’ll further explore those differences, and then we’ll walk through a more in-depth explanation the four types of CO2 systems that might be present in new supermarket refrigeration applications. <>