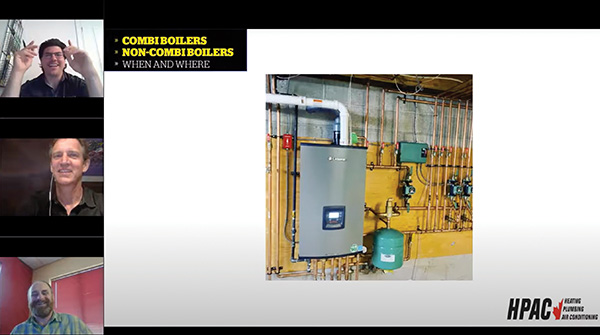 On Wednesday, September 9, HPAC Magazine hosted the first of our free 30 Mechanical Minutes series of educational webinars for the mechanical industry.

This first session, “Combi Boilers, Non-Combi Boilers: When and Where?”, invited two hydronic industry experts online to discuss the benefits and challenges of combination boilers, those appliances that handle both space heating and domestic hot water for home owners and other building spaces.

The online session featured a dialogue between regular HPAC contributor, Steve Goldie, hydronics specialist with Next Supply, and Mathew Pottins, group leader for residential products with Aqua-Tech Canada. Goldie and Pottins tapped on their years of experience in the field and shared photos of past installations to highlight the evolution of combi boiler technologies and how the products are being used today. 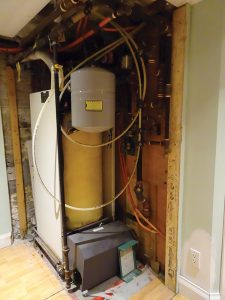 Both speakers noted that combination boilers are very much in demand in our Canadian marketplace. Creating one appliance for both heating and domestic hot water (DHW) has led to different designs over the years. Goldie shared a photo of an older storage-based combi system where an enclosed hot water tank stored energy and put that through the heat exchanger to do the closed loop space heating.

“One of the things that makes a combi system very desirable is they don’t take up a lot of space,” said Goldie.
Pottins compared the shrinking size of modern combi units to the evolution of the cell phone. “They started as this big device and shrank down to a smaller device, and now the cell phones are growing in size again. I think that’s what you’re going to see with the combi market as well,” said Pottins.

Goldie was glad to hear that opinion. “I think the market really wants to have a small box on the wall, but although it’s smaller and fits on a wall it still takes up the same footprint because you’re not really using that space underneath it. So, whether it’s standing on the floor or hanging on the wall it’s taking up the same amount of space. And I do like to see storage for both hot water and from a heating point of view because it gives you a bit of a buffer.”

And Pottins noted that more and more often he’s seeing smaller combi boilers getting installed and then realizing that the domestic flow is not keeping up with the demands of the house, so an external 30-gallon storage tank is being added to create recirculation and mass in the system. “I feel like that’s going to soon be the new norm,” he said.

If units are not storing hot water in a tank, Goldie explained, they need a lot of firepower to make enough hot water in order to make it on demand. “You need about 33,000 Btus for every gallon-a-minute at showering temperature (so with 40F incoming water, a 65F delta-t that’s going to give you 105F shower water, with one shower head at about two-and-a-half to three gallons-a-minute, you’re looking at 100,000 Btus/hr). Now if you want to do two showers, you’re looking at 200,000 Btus/hr, so it’s no accident that the tankless water heaters are all sized around 200,000 Btu/hr.” 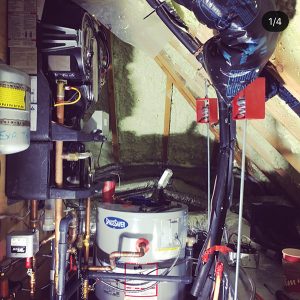 Pottins showed an example of an older house that was renovated and heavily insulated, and they stuck a smaller combi unit (around 110,000 Btus) in the attic. The heating side kept up no problem because the heat loss of the house was very minimal, but because it required more DHW flow an external storage tank was required.

Both agreed that combi units are well suited to newly-built or renovated homes, but in Pottins’ example, a 200,000 Btu combi would have worked out well on the domestic hot water side, but would have been too many Btus on the heating side.

“The discrepancy in the size of the heating load and the domestic water load is a good point,” noted Goldie. “We run into issues where we are oversized on heating, are we going to be short cycling, but the modulation on new boilers has come a long way (like 10-to-1 turn down rate on modulation is pretty standard now), so a 200,000 Btu boiler can modulate as low as 20,000 Btu to meter heat load. So that’s great, but still too big to do a lot of the micro loads if you’re doing multi zoning in a house.”

The final image shared by Pottins during the webinar was a wall-hung combi boiler installation that replaced a large older boiler and hot water storage tank. The tidy installation demonstrated the space saved in the basement of this older house. Both acknowledged how older homes used to allow for larger mechanical rooms, but that’s not the case today. 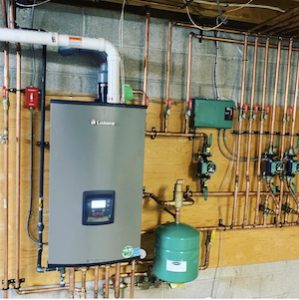 “My argument is, are combi boilers going to do the best job at all things? I’d say no, not necessarily,” said Goldie. “If I had the money and the space, I’m going to have a boiler and an indirect hot water tank with decent storage, and I’m going to have a buffer tank so I can manage all my micro loads and not short cycle the boiler.

“But the reality is, contractors and homeowners want to do everything and they give you a space not much bigger than a bread box. That’s the challenge we’re facing.”

Confirming Steve’s remarks, Pottins noted how in Toronto he’s seen a lot of houses where they’re built narrow and vertical, and there are multiple bathrooms and two laundry rooms but only one tiny little mechanical room.

Goldie believes there are still a lot of misunderstandings in the marketplace about domestic hot water production. “The perception is a little tankless in the wall can do all the hot water you need forever. And it can, at a fixed flow rate, but if you’ve got a big multi-flow shower head that’s got five body sprays and a big rainfall head that’s pumping out eight, nine, 10 gallons-a-minute, you’re not going to get that from a tankless or a small on-demand combi boiler.”

Together they both identified some of the clear advantages of the combi boiler:

Pottins added that in cases where homeowners are looking at moving into hydronics, a combi unit with an air handler is an easy switch from a furnace and a hot water tank.

Some of the challenges raised with combi boilers:

For both Goldie and Pottins, the key message, for not just this topic but for many mechanical contracting topics, is to have a clear understanding of the application and your ability to meet the expectations of the end user.

“Unfortunately, this is where things do fall down,” said Goldie. “I think that we either don’t do a good enough job of explaining the limitations of the equipment we’re selling, or people want to sell good news and promise the world (oh yes, you’ll never run out of hot water), and I fight this all the time.”

Both see a place for combi units in our marketplace, as long as the expectations are properly explained and understood by the end user. <>

Following their discussion, Goldie and Pottins answered live viewer questions. To see and hear the entire webinar recording, including the Q&A, visit: hpacmag.com/tech-pulse/