Consider alternatives when a pipe blockage or leak occurs 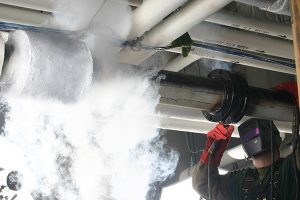 Pipe freezing works on pipes ranging from ½ in. to 48 in. in diameter.

Emergency pipe repair does not have to mean an entire system has to be shut down. This is music to the ears of residential and commercial customers – no more ripping out walls in search of the site of the blockage. Seeing really is believing. That is what Wayne Chuck, general manager of N-Two Cryogenic Enterprise Inc., finds when he demonstrates his services to contractors and property managers. “Unless a person actually sees it happening they can’t believe it will work for them,” he says of the service his company provides the freezing of pipes for selective repair.
“What we do in a nutshell is, in an emergency situation where there’s a broken or leaking pipe and you can’t afford to shut the building down, we isolate the leaking section and save the property manager shutting down the entire system,” said Chuck.
The process works like this: a containment sleeve is placed around the pipe and liquid nitrogen at a temperature of -320F is pumped into it. A set scale indicates how long it should take for the pipe to freeze. Once frozen, repairs can be made and blockages cleared without the need to shut down valves, drain the system or depressurize the line.
Valves can also be repaired without interruption, and pumps without draining systems. With the leaking pipe frozen, that ‘branch’ may be out of commission but the rest of the system can operate as normal, except when it is the main water system itself, which needs repair. Pipe freezing works on pipes ranging from ½ in. to 48 in. in diameter, on all metal pipes and, with extra time, plastic pipes.
There is, therefore, no need for a building manager to cut off a building’s water main in order to make one minor repair. Chuck cites how a job in the downtown core displayed the effectiveness: a damaged eight-inch pipe meant “holding back 73 floors of water” for two hours while the repair was made. Draining the building would have meant a disturbance of sediment in the pipe that would have cost a month’s worth of labour costs to clean out.
Chuck also points out that the system involves no added costs for removal or storage of fluid and, with no need for drainage, it is environmentally friendly. Once customers see the process in action, Chuck says, the callbacks are frequent. “We do lots of malls. If a manager can find a way to avoid a shutdown, he will go for it.”
Chuck says the technology his company utilizes has existed for more than 40 years, although it has only been in day-to-day use in this country in the last 20 years. He sees pipe-freezing as coming into its own with buildings that are more than 20 years old and have a history of poor valve maintenance. “A major change in recent years is that 50 per cent of our pipe freezing now involves glycol rather than water,” said Chuck.
Similar products intended for use in residential and light ICI applications also sidestep the need to drain systems. They freeze liquids in steel, copper, cast iron, aluminum and plastic pipes from 1/8 in. to 2 in. using CO2. Freezing times average three minutes for ½ in. cast iron and steel pipe, and approximately five minutes for ½ in. copper tubing. Hot water (up to l40F) can be frozen using these systems, and three-way freeze systems are also available. Experience says that backup CO2 should be taken along on every job (the only means of checking how much CO2 remains in a given cylinder is by weighing it). Keep in mind that, should the cylinder need to be changed during work, the ice cannot be allowed to melt.
Other systems follow the same principle but use refrigerant as the fuel to isolate sections of copper or steel pipe with ice-plugs. Refrigerant systems are designed to operate continuously, maintaining the ice plug until the repair job is completed. They are effective in copper lines up to 2½ in. and in steel pipes up to two inches.
Frozen pipes, on the other hand, can be addressed with thawing machines. These units heat the pipe by running a very low voltage through it, thereby melting the blockage. Since the units use electricity this application is only useful with metal pipes.
The unit slightly electrifies the area between two of the systems clamps, making it safe to touch the pipe and faucets outside the electrified area. Reportedly, even touching the pipe between the clamps will not result in a shock or burn, although touching the clamps themselves could result in a burn. The electrified pipe is not a fire hazard.
The main advantage of these systems over more traditional methods, such as using torches to melt blockages in affected areas, is the potential savings of time and money. Thawing machines offer thawing ranges extending up to 175 ft., meaning that even if a blockage occurs along a length of pipe that is difficult to access, the thawing machine can be hooked up to exposed pipe on either side of the blockage and can still efficiently be used to clear the pipe.