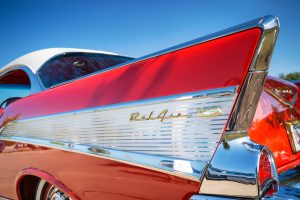 When I was in high school, the cost of gasoline was seldom of concern. I drove a 1957 Chevy Bel Air, with a modified 409 engine in it, and I do not think I ever thought to check what the gas mileage was. Premium grade gas was a measly $0.25/gallon. Using a trusty inflation calculator, I discovered that something that cost $0.25 in 1970 would cost 532.8 per cent more in 2017; meaning that a gallon of gas should now cost $1.58/gallon ($0.42/litre).
Unfortunately, the increase in the price of gasoline has far outpaced the rate of inflation. For that reason, there has been a great deal of investment in research and production of hybrid (gas/electric) and electric cars. While there is no need to name names, in my ever so humble opinion I find most of the electric or hybrid cars to be completely unattractive. In fact, there seems to be an inversely proportional relationship between fuel efficiency and curb appeal.
Just to prove that I am not just being biased, I will admit that Tesla has managed to combine the best of both worlds…efficiency and style. Of course, the price tag will reflect that fact. Electric car fuel efficiency ratings translate the fuel economy from kWh/100 miles to an equivalent MPG. The efficiency of some of these cars is astounding–in the over 100 MPG range.
How is this relevant to our industry? Well, there have been similar, if not quite so drastic, improvements in HVAC equipment efficiency. Not only do the efficiency increases warrant equipment replacement, but when you add energy rebates to the yearly reduction in electrical consumption, this becomes the perfect motivation for considering an equipment upgrade/retrofit.
There’s no disputing the fact that chillers are high priced items. They are the most expensive piece of equipment in an office building, and likely are responsible for a large percentage of the building’s electrical consumption.
There is no question that chillers are big-ticket items. In many facilities, it could be the most expensive piece of equipment onsite. However; there are many factors that would be cause for putting off replacing a chiller: the replacement cost; relatively long service life of a chiller; the potential difficulty in replacing a chiller (depending on where it’s located in the building); and downtime during the replacement.
Another possible deterrent to chiller replacement could simply be the fact that it is still providing the required capacity to maintain comfort in the building, and providing that comfort relatively trouble free. The trouble free part would likely be the result of using a competent contractor combined with a regular and thorough maintenance program.
But, should the fact that a chiller is operating trouble free be the determining factor in whether a chiller is under consideration for replacement?
Let’s take another look at that 1957 Bel Air for some perspective. Suppose I still owned it (I wish), and had taken great care of it over the last 47 years. With regular oil changes at 3,000 miles, regular tune ups, continuing to use supreme grade gasoline, periodic flushing of the cooling system along with replacing the coolant at the recommended intervals and an engine overhaul at 100,000 mile intervals that beast would still be a fun ride, but it would also still be getting about 10 mpg. A well maintained inefficient piece of nostalgia.
In addition to the inefficiency aspect, there have been so many other improvements in automotive technology since 1957; comfort, suspension, computer control, handling and audio. There are so many reasons to consider upgrading to a new model.
The same thing applies to chillers. Advances in chiller technology in the last 20 years have resulted in substantial increases in efficiency.
20 years ago, typical chiller efficiency ratings would have been in the 0.85 to 1.00 kW per ton range.
10 years ago, typical chiller efficiency ratings would have been in the 0.7 to 0.85 kW per ton range.
Today’s most efficient centrifugal chillers can operate in the 0.50 kW per ton range (with some approaching 0.40 kW per ton).
That is up to a potential 40 per cent decrease in electrical consumption with a new high efficient chiller. And considering the fact that a 20+ year-old chiller is likely not operating at the same level of efficiency it did when installed, that decrease might be even greater. These savings, combined with any available energy company rebates, can go a long way to offset the price of that new chiller.
Note: In most applications, chillers will operate at a fully loaded condition for only a small percentage of total run time. Full load ratings can still be used to illustrate the magnitude of savings that might be realized through chiller replacement. A moderate improvement in equipment efficiency can produce significant savings, especially in larger tonnage applications, which require that the chiller operates more than 2000 hours per year.
In addition to operating at higher efficiency at full load conditions, today’s chillers have higher part-load efficiencies than older chillers. Given that most chillers operate most of the time at less than full-load conditions, improved full-load and part-load operating efficiencies translate into significant energy cost savings.
An accurate estimate of energy savings realized by a chiller replacement must be made to determine the viability of such an undertaking. A load profile must be developed, which identifies the existing chiller’s energy use in kW/ton over the entire operating range for the existing chiller in the facility under consideration, from full-load to the minimum load the chiller experiences. This information will allow for a comparison between the current chiller’s load profile with the manufacturer’s load profile for the replacement chiller under consideration. By knowing the number of hours a chiller operates at each load, it will be a relatively simple matter to quantify the resulting energy savings, and make a determination as to whether to proceed or not. 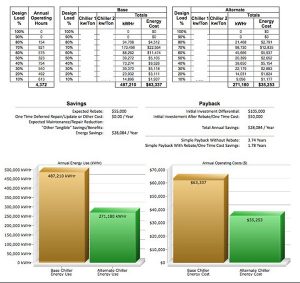 Figure 1 is an example of such a load profile for an application utilizing a 450 ton chiller, with an electric rate of $0.13/kWhr. The electrical savings, based upon this profile, amount to approximately $28,000 per year. The payback for the invested capital to replace/upgrade the chiller is 3.74 years. Now, factor in the expected increases in electric rates during the next 3+ years, and that payback becomes even better.
But, that’s not the entire story. This particular chiller replacement was also able to participate in a rebate from the local electric utility. The amount of this rebate amounted to a whopping $50,000, lowering the payback on investment to 1.78 years.
Now, these rebates certainly can vary in value, and are completely dependent on what the electric utility is offering at any given time. One factor to consider in when to replace is the rebate. However, it must be assumed that at some point, as efficiency standards become adopted and required, there might not be any incentive for utilities to continue to offer rebates on efficiency standards that are required.
To summarize yes, the 1957 Bel Air, with its feel or raw horsepower, was a blast to drive. But technology has changed dramatically in the last several decades, and in the interest of curtailing expenses it bears an in depth look to investigate more efficient options.