It is well known in industry circles that when designed and installed correctly, hydronic heating and cooling systems deliver the highest possible efficiency and comfort to building occupants. Likewise, hydronic snow and ice melting systems provide safety, convenience and access in challenging winter environments. But like any system, if not installed correctly, these systems may underperform, malfunction and disappoint owners.
The reality is that I have heard too many stories from homeowners who paid thousands of optimistic dollars for “the best” type of heating, only to get a radiant heating system that was poorly designed and/or installed and not functioning correctly. Do you think these people recommend radiant heating to their friends and family? Not likely.
Professionals know that codes for plumbing and electrical systems are important to ensure that minimum safety and performance requirements are met. A well-written code that is understood by designers and contractors, and consistently enforced, can certainly lead to more satisfied owners and continued growth of the hydronics industry.
Hydronic heating systems in Canada do have a code. First published in 2001, CSA B214 “Installation Code for Hydronic Heating Systems” is that code. In fact, B214 has been referenced in the National Building Code of Canada since 2010, so it is actually the law of the land for jurisdictions that have adopted the 2010 NBC. Not all jurisdictions adopt the NBC on schedule or in its entirety, so always check with the local Authority Having Jurisdiction (AHJ) to determine local requirements.
However, anecdotal stories reveal that B214 is not always understood, or for that matter even known to exist. To help address this matter, for the past three years a dedicated team of hydronic experts known as the B214 Technical Committee (TC) have worked together to make some important improvements to B214. On October 20, 2016 CSA Group announced the publication of the fourth edition of CSA B214-16 “Installation Code for Hydronic Heating Systems.” As a member of the 27-person TC, which includes several members of the Plastic Pipe Institute (PPI), I am proud to be associated with this committee and of the result.

REVISION HIGHLIGHTS
The 2016 edition of B214 has been updated for improved clarity, including reorganization of several sections. Several new requirements, written in specific and enforceable language, have been added.
There are dozens of changes, but since I am a radiant and piping guy, here are seven notable revisions*:
• Addition of PE-RT tubing
• Inclusion of approved fasteners for heat distribution tubing
• Revised maximum floor temperatures
• Clarifications on snow and ice melting systems
• A new Annex C on radiant cooling systems
• A new Annex D on minimum flow rates for heat distribution tubing
Notes added about potential risks, such as Legionella, in combined potable/hydronic systems
1. Polyethylene of Raised Temperature (PE-RT) tubing was introduced into the US market in 2007 with the publication of ASTM Standard F2623. In 2013, CSA Standard B137.18 was published. PE-RT tubing meeting either of these standards is now included in B214 as an approved piping material.
2. The Technical Committee heard about encounters with inspectors debating about which types of fasteners were approved for radiant or snow melt tubing. New Clause 14.4.4.1–Types of tube fasteners begins with “Unless prohibited by the manufacturer’s instructions, approved tube fasteners shall include the following,” followed by a list of five different types of tubing fasteners that manufacturers agreed should be allowed. This should prevent those type of disputes.
Also, since it is not always clear about the minimum spacing between tubing fasteners, new Clause 14.4.4.2–Spacing of tube fasteners spells this out. (Hint: “in the absence of manufacturer’s specifications” it is 0.75 m).
3. The previous B214 specified maximum floor surface temperatures in a way that was a bit ambiguous. Now, B214-16 Clause 14.2.1 says “Floor surface temperatures shall not exceed 29ºC (84ºF) in occupied areas, with the following exceptions:
31ºC (88ºF) in industrial spaces;
33ºC (91ºF) in bathrooms, indoor swimming pools, and foyers; and
35ºC (95ºF) in radiant panel perimeter areas, i.e., up to 0.8 m (2.5 ft) from outside walls.”
Radiant experts will note that the general maximum floor surface temperature of “29ºC in occupied areas” is based on requirements published in ASHRAE Standard 55 –Thermal Environmental Conditions for Human Occupancy. Now, B214 is matching this recognized consensus standard. Worth noting is that HPAC contributor Robert Bean was the chair of the Standard 55 User Manual Project Review Committee; lead author for the Standard 55 Short Course and membership Chair for the 55 Standing Standard Project Committee.
4. In B214-12, snowmelt systems were included with Auxiliary systems, not entirely appropriate. In B214-16, Chapter 17 is all about Snow and Ice Melt, with some updated requirements. For instance, ½ in. nominal PEX and PE-RT tubing are added to Table 3 “Loop lengths for snow and ice melt systems” since certain low-profile SIM systems need ½ in. tubing. Previously, ½ in. nominal tubing was not even allowed for SIM systems.
Also, Clause 17.5 on insulation for SIM systems no longer requires insulation on all vertical slab edges. 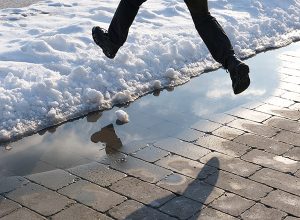 If you think about it, vertical edge insulation at the edge of a driveway or ramp would be exposed to the elements and disintegrate, especially when hit with weed trimmers. In many cases, it is beneficial to allow heat to thaw the soil against the slab edge to allow for natural drainage of melted snow – frozen soil could cause an ice dam. So that requirement has been removed.
5. Radiant cooling systems, using chilled water to help cool an occupied space through a floor, wall or ceiling, are really catching on for commercial and residential applications. Strictly speaking, B214 does not even apply to cooling systems. However, the Technical Committee agreed it was important to share some basic information about radiant cooling systems with B214 users, especially since it is usually the radiant heating system that operates as the cooling system. Therefore, a new “Annex C Radiant Cooling” has been added for informative purposes. Here is an excerpt:
“C.2 Radiant cooling surface temperatures
* For thermal comfort reasons, cooled floor surface average temperatures should not fall below guidelines set in ASHRAE 55 and this Code.
* Cooled floor surface average temperatures should not fall below 19ºC (66ºF) in occupied areas. Cooled floor, wall, or ceiling surface temperatures should not fall below the anticipated dew point of the space.
* To prevent condensation on any cooled radiant surface, the supply water temperature for a radiant cooling system should be a minimum of 2ºC (3ºF) above the anticipated space dew point, or as per manufacturer’s system design.”
Annex C also includes information about controls, tube placement and thermally activated building systems.
6. Oversized heat distribution tubing in radiant heating or snow and ice melting systems can result in the flow rate through the tubing being too low. As a result, laminar flow can occur, whereby slow moving fluid clings to the inside of the tubing wall in a so-called boundary layer, effectively insulating the faster fluid in the middle of the tubing and reducing heat transfer through the tubing wall. This situation can reduce the heat output of a hydronic radiant heating or snow and ice melting system. The problem is rare in small diameter tubing, but it can happen. 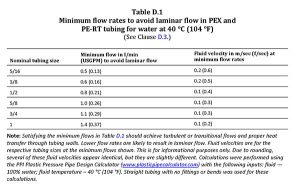 To ensure good heat transfer through hydronic systems, designers should size heat distribution tubing to result in turbulent or transitional flow and avoid oversizing the tubing, which could result in laminar flow. A new “Annex D Minimum flow rates for heat distribution tubing” provides informative guidance on this topic, with a new Table D.1 Minimum flow rates to avoid laminar flow in PEX and PE-RT tubing for water at 40ºC (104ºF). Oversized tubing wastes money, so this might help someone avoid two problems.
7. HPAC’s Modern Hydronics I (2016) included the article Mixing hydronic heating water with potable water.¹ It warned against the potential dangers of combined systems, which could allow Legionella to grow in water in idle heating pipes and then be transferred to the potable water system though connection to a shared heat source. This is a health and safety risk to building occupants, especially young and older people. Therefore, the TC added the following note about potential risks in combined potable/hydronic systems:
“The risk of creating an environment promoting the growth of pathogens such as bacterium Legionella pneumophila (Legionella) within a storage-type dual purpose water heater is reduced when the system is designed and operated with a minimum tank water temperature of 60ºC (140ºF). In combined space- and water-heating systems, there is still the risk of growth of Legionella within the heating system, resulting in a potential risk to users of the plumbing system. Also, 60ºC (140ºF) water temperature is often too hot for a radiant heating system, and could damage flooring and tubing embedment materials, and overheat floor surfaces. Therefore, appropriate system, control strategy, and/or components should be utilized to reduce the risk. An example is the use of a heat exchanger.”
PPI Recommendation E, published last April, says “it is the recommendation of the PPI that designers and installers not specify or build systems where the mixing of hydronic water with potable water may occur.”²
WORTHWHILE INVESTMENT
A code is not a design guide and B214 is intended to provide clear and enforceable minimum requirements for the safety and performance of hydronic heating systems. Experienced hydronic installers are likely meeting all these requirements already. Wouldn’t it be great if all installations did too?
We encourage all designers, installers, inspectors and distributors to get their own copy. It is even better if you educate your builders, customers and inspectors about how your systems are complying with B214, since even if B214 is not yet enforced in your region, knowledge of the code can be used as a positive marketing tool.
CSA B214 is not expensive and can be purchased at http://shop.csa.ca.

Lance MacNevin, P. Eng. is director of engineering for the Plastics Pipe Institute’s Building and Construction division and a member of CSA’s B214 Technical Committee. He is a mechanical engineering graduate of the University of New Brunswick. He can be reached at lmacnevin@plasticpipe.org.

Credits:
Special thanks to CSA B214 program manager Jelena Vulovic for her support of this Technical Committee, and for permission to share these excerpts with readers.
* Use of a portion of CSA B214 “Installation Code for Hydronic Heating Systems” has been authorized by CSA Group. CSA Group is not responsible for the manner in which the data is presented, nor for interpretations. This material is not CSA Group’s complete and official position on the referenced subject, which is represented solely by the standard in its entirety. No further reproduction is permitted.