Taking the mystery out of electricity in HVAC 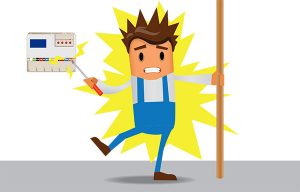 How many times have you heard someone say “Who let the smoke out?” in a mechanical room. You see the infamous “black smoke” come out of a piece of electronics and everyone starts pointing fingers. We have all done it. The smoke came out and the power LED shuts off.

It is a funny anecdote but sometimes boggling to understand what might have gone wrong. AC , DC , POWER, OHMS, VA, V = IR , single phase, three phase, induction, resistance and physics, just to name a few, are all terms that make us squirm in our seats. The plan for this new series of articles on electricity is not to bore you with a whole bunch of math and drawings of sine waves but to de-mystify some of what we frequently see in the field.

What I will do is take a “journey” into the places in HVAC no one likes to go; using clues and insight to make things seem simpler or at least not as daunting. At the end of the day, electricity can be simplified and made easy to understand.

I am not saying, “Hey, walk into a boiler room and start shoving your screwdriver everywhere.” Electricity is to be respected because it is deadly. On that note I will tell you a little story of when I did not respect electricity. That story is a good place for us to start our “journey” as well.

Generally speaking, at one time or another people with electrical experience get a little cocky with electricity. They have not been “bitten” for a while so they tend to not remember what it felt like. That person was me in a boiler room one day.

Related: What you need to know about electrical resistance

Every piece of electrical equipment has a warning on it. We all know it. DISCONNECT ALL POWER BEFORE SERVICING. We have seen it a million times.

Something under the cover needed to be tightened on a snowmelt job I was at and I chose to disregard my own warnings. I took my screwdriver, normally I would hold on the plastic portion, because plastic will insulate you from the voltage, but this time for some stupid reason I placed my finger on the metal shaft.

Generally this would not be a big deal because with voltage you need a return path for it to go somewhere; meaning if you grab onto a LIVE wire, with let’s say 120VAC on it, that voltage wants to go somewhere. In fact, it has to go somewhere. If it cannot get somewhere–such as through your body to ground, or to a neutral–then you have no shock. But this is the other part that I did wrong. It was hot in the boiler room so I had taken my jacket off. I was wearing a Tee shirt and because the area was hard to get into, my arm was leaning on a pipe. The one hand that was touching the shaft of the screwdriver was on the screw that had 120VAC on it. My other arm was touching a copper pipe (that was grounded) I proceeded to get electrocuted.

Usually I do not use the term electrocuted. I use zapped or shocked, but this time I really got electrocuted. It hurt and I actually could not let go easily as my muscles contracted. I just stayed there getting electrocuted. Luckily I got off it after a second or two but it was enough to really take a toll on me. 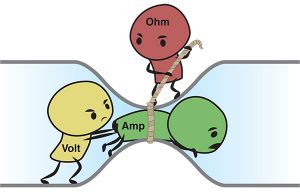 So what can we learn about electricity in this story? Let’s start by breaking it into a few different categories: voltage, current and resistance, the first three topics in this electricity column. There are a few things at play in this story that lead to my “electrocution.”

The first is voltage referred to as VOLTS (well actually the first I guess would be that I was stupid but let’s take that out of the equation). Let’s start with the voltage. In this situation it was 120VAC, in North America this is the standard, it stands for 120 volts with an alternating current. We won’t get into this yet but we will at a later date but just remember this is where we get those cool sine waves from.

The higher the voltage gives you more potential to “push” the electrons more easily. This is part (I say part for a reason) of the reason why a nine-volt battery only gives you a small shock but touching 120VAC can kill you. Voltage is always described as “potential.” This is because it has the potential to move electrons but cannot until it has somewhere to go.

If you think of the faucet again, when the faucet is closed, it still has 70 psi behind it, you know if you open the faucet water will spray out, this is the same as an electrical outlet with 120VAC behind it. It has the potential to power your blender but it won’t until you plug it in.

You need a connection between the voltage and ground for it to start moving the electrons. This happens because the voltage goes through the motor, starts it spinning, and then the voltage goes back out again to the neutral (or ground). Essentially from a higher voltage (120) to lower voltage (0) and that is just like the faucet.

If you connected a hose to the faucet that had 70 psi behind it and you pressurized that hose to 70 psi and you opened the faucet, no water would come out because the pressure needs to move from higher pressure to lower pressure. This is the same principle for electricity. Keep in mind there are situations that can deviate from this but for the most part it holds true.

The second part of my shocking experience is current referred to as AMPS. You always hear people say: “It’s not the voltage that kills you, it’s the current.” This is true. Have you even been shocked by static? That is usually around 20,000 volts but there is barely a current in it so you just get a zap.

To put it in hydronic terms again, current is the “flow” in a hydronic system. It is how much water is moving through the pipe. This is the same as the flow of electrons in electricity. The voltage pushes the electrons around (an analogy) and the pressure in our hydronic systems pushes the water around. The more flow you have the more water gets moved. It is the same for current.

This is why it was very stupid of me to do what I did. With me being a fairly good conductor (skin is a conductor at 120VAC), one hand on the large voltage (finger on screwdriver shaft) and the other on ground (arm leaning on pipe) meant there was a lot of current running through my body because the power source could supply a lot of current.

Let’s put it in fluid terms again, which would you rather have: a pipe with 70 psi but can only flow 0.1 gpm through the pipe or a pipe with 70 psi able to flow five gpm through the pipe flowing into your basement? The later would move a lot more water and flood your basement in a much shorter period of time. I would rather have the 0.1 gpm flowing into my basement.

Me being a “good” conductor is our third part of the equation. If my skin had a very high resistance (very dry or made of plastic) or I was wearing my jacket the voltage would have a tougher time pushing the electrons through my body to ground somewhere. This can also be summed up in a fluid analogy. If voltage is pressure, current is flow then what is the resistance? You know all those head loss calculations you do; resistance or OHMS is the same as those parts that restrict the flow.

Resistance in an electrical system is something that resists the flow of electrons. In my situation, my jacket would have been a good resistor. It would most likely take more than 120VAC to get thought the resistive properties of my jacket to electrocute me. If there was more voltage it may be able to get through. The reason is everything has an electrical breakdown voltage; everything. This means at a certain voltage the item does not resist anymore, it starts to conduct and allows current to flow though it to somewhere. Everything will conduct if you put enough voltage to it. In other words if you push hard enough (High Voltage) the current will start to flow if it has somewhere to go. There is a reason that there is specific spacing up on the power lines so that the voltage does not jump across, even though air is a very good insulator.

So what did we learn? First off, disconnect all power before servicing anything with electricity. If you do not disconnect the power, keep one hand in your pocket when playing around so at least the current won’t pass through your heart.

Electricity at its core is made up of these three components: voltage, current and resistance. In HPAC May we will cover ACDC; not the band, but the difference between the two currents.