Virtually everyone understands how the earth is heated during the day with radiant energy, but few give much thought to radiative cooling, night or daytime. In part it is earth to sky radiation that causes outdoor water to freeze or frost to form, even when air temperatures are above freezing.
This is important stuff – imagine what would happen if the earth was unable to balance inbound daytime energy with the necessary outbound energy. You certainly would not live to see the Toronto Maple Leafs win the cup. So yes, our 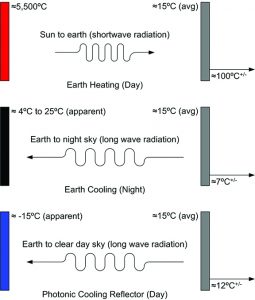 survival counts on this energy balance.
The concept of sending heat energy into space has been used to cool buildings for centuries. In fact, ancient civilizations mastered this technique long before someone thought we should use CFCs and electricity from combustion for cooling.i The people of ancient times figured this stuff out in such a manner that it was not necessary to fire up a coal or natural gas power plant.
Let’s take a step back and look at the basic fundamentals. Back in the 1800s a British-German astronomer named William Herschel told the world about infrared radiation. Then a few other guys like Josef Stefan and Ludwig Boltzmann figured out the energy exchange between two surfaces had a constant, which found its way into a now famous law called the Stefan-Boltzmann equation.ii A form of this formula can be used to calculate the net exchange of radiative heat (Qrad, Watts) between, for example, the roof of a building and the sky. 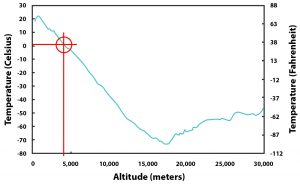 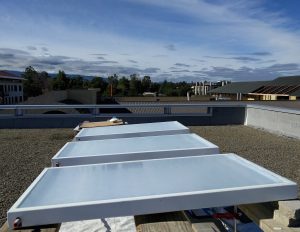 In Figure 1, some typical values for scope are provided but in practice you should know determining sky, earth and building temperatures requires a little more thought (see Figure 2) and for design you ought to make use of available software tools. In general, just by using roof mounted sky radiators it is possible to shed anywhere from 15 W/m² to 150 W/m² from a building for cloudy to clear nights respectively.iii This can be done using heat exchangers, as shown in Figure 5, (a) and (b).
The problem with roof-based solar radiators is naturally a day light problem. As soon as they see day light they turn into absorbers but this challenge has been potentially solved recently by Stanford researchers Aaswath Raman (et al).iv His new start up is one of several groups working to commercialize energy efficient daytime cooling using an über renewable resource – the coldness of space. Manipulating light at a nanoscale, Raman is developing a new generation of roof radiators (see Figure 3) that can cool fluid to 5C below ambient daytime temperatures.

For many parts of the world this is more than sufficient for cooling, especially with large surface area heat exchangers. It is an exergy efficient marriage literally made in heaven with high temperature radiant space cooling systems. It has the ability to reduce energy consumption in some buildings by 30 to 60 per cent.

In November 2015 Pacific Northwest National Laboratory scientists (Fernandez, et al) released a study looking at these “photonic radiators” in comparison to other

systems. Some of the findings are shown in Figure 4.vi 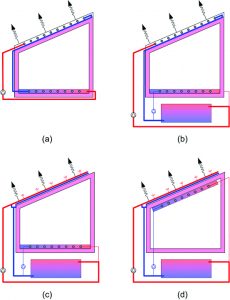 These technologies can be incorporated into other approaches for compressor-less cooling such as nighttime evaporation as shown in Figure 5 (c) and (d). The principle of evaporative cooling is old but still practical. Engineering researchers Yellott and Hay developed an evaporative solar system called a “roof pond” (1967), evaporative cooling with a twist. Systems based on these strategies have since been used in modern times by award winning engineers such as Peter Rumsey on the Global Ecology Center at Stanford University (Figure 6).vii Furthermore, they lend themselves to help cool PV systems for enhancing efficiencies.viii,ix

If you have been following my rants you know that we covered the early introduction of nanotechnology in the late 1990s. Then we started to introduce radiant cooling with dedicated outdoor air systems. Of late we have been preaching the second law principles of exergy efficiency. Well, it appears all these important subject matters are coming home to roost in an incubation stage with 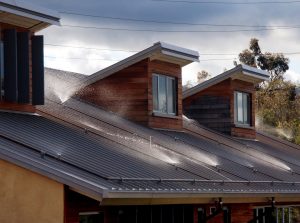 photonic radiative cooling systems. It bears repeating that the temperatures created at power plants are of an industrial grade and we are using them for non-industrial grade applications on buildings. Regardless of an HVAC appliance’s efficiency score, even the highest rated cooling products when connected to a combustion-based power system, contradict the philosophies of sustainability.
There will come a time when we won’t use compressors for the cooling of people and buildings. It is simply not necessary. The heat sinks we need to reject heat to, or absorb heat from, are literally within our reach and there are some very smart people who will show us how to get very good at accessing them. As you study these products keep in mind there are no shortage of sceptics who have declared solar   thermal and radiant as dead when in fact there is no better way to fight a radiant problem than with a radiant solution.
Solar thermal and radiant is not dead when it comes to discharging energy; this is just the beginning of a continuum. When it comes to radiative technologies it is wise to remember the famous 1974 lyrics by Randy Bachman in BTO’s Not Fragile album, “B-b-b-baby, you just ain’t seen n-n-nothin’ yet.”