HPAC Magazine spoke with John Siegenthaler about the sizing, placement and proper connection methods for expansion tanks on hydronic systems.

In this episode, HPAC editor Doug Picklyk was joined by regular contributor and hydronics expert John Siegenthaler. And this edition was sponsored by Wolseley Canada, national wholesaler in the HVAC/R and plumbing industry.

Siegenthaler explained how expansion tanks are essential to keep the pressure under control in closed-loop hydronic systems. Perhaps one common misconception is that pressure relief valves are a go-to for releasing pressure in a system. “It’s the last resort,” said Siegenthaler. “The expansion tanks should do most of the work handling the expansion and contraction of the fluid.”

Modern hydronic systems typically use a diaphragm-type expansion tank with a flexible rubber diaphragm. Water presses into the top part of the tank as it heats up and expands. This compresses against the air that is captive in the tank’s diaphragm.

As the water in the system cools and contracts, the diaphragm moves up so that cooler water will move back into the system. At the bottom of the tank, you will always see an air valve that looks like the valve on a tire, this allows the tech to set and ensure the pressure is accurate as per the tank manufacturer’s instructions.

“To determine the ideal place in your system for an expansion tank, it’s essential to acknowledge what is called the point of no pressure change,” said Siegenthaler.

“This occurs where the expansion tank is placed,” he note. As the flow goes through the circulator, friction between the fluid and the piping system is evident as there is a continual drop in pressure through the system. 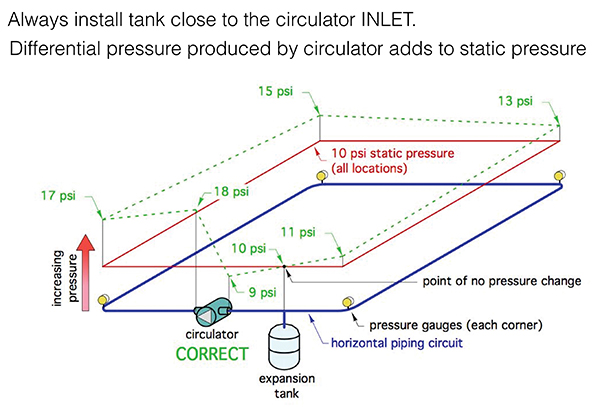 The expansion tank should be located before the circulator. Note the pressure drop as fluid travels around the loop. If the tank is located after the circulator negative pressure could occur.

Siegenthaler noted that if an expansion tank is moved to the opposite side of the system (relative to the circulator), the problem of negative pressures is endemic to the entire system, which means the pressure in the piping is the same or lower than the atmospheric pressure (point of no pressure change).

Negative pressure in a piping circuit is problematic because air could be sucked into the system through flow-type air vents or loose valve packing. So always position expansion tanks before and close to the circulator.

According to Siegenthaler, monitoring the health of tanks is simple. First, unscrew the plastic cap on the valve (at the bottom of the tank), then use a nail or a pin and press the valve’s stem. If you notice water spraying, the tank will need to be replaced.

This is because the valve represents the point of captive air volume in the tank, and if the diaphragm has cracked or failed, the makeup water system will feed water into what becomes a water-logged tank.

Another way to quickly determine if the tank has become waterlogged is by tapping on the tank with your knuckle — a hollow sound on the bottom of the tank is good. You probably have a failed diaphragm if you rap your knuckle on the tank and hear a THUD.

Furthermore, if you notice water consistently spilling out of the pressure relief valve when the system heats up, it’s probably due to a failed expansion tank.

Corrosion failure is possible when installing inverted tanks, so it’s recommended not to install expansion tanks in this way. This is because the inside of the expansion tank is carbon steel and not stainless steel, making the inside of the tanks susceptible to oxidation, especially if the installation is inverted. The ideal way to install the tank is hanging down from the top of the tank.

Before the days of heat pumps and modular condensing boilers, boilers would often run up to around 160F to 180F. The sizing method for expansion tanks in this temperature range would be to assume that the entire water volume in the system would have a considerable temperature change, resulting in an oversized expansion tank.

An extensive commercial radiant system could easily have 100 gallons of water in it, especially with several thousand feet of ⅝-in. or ¾-in. tubing.

By accurately calculating the required tank size, you can compensate for a larger temperature change for only a portion of the system experiencing higher temperatures. A smaller tank is not only a cost-saving measure; engineers size the system according to the actual amount of fluid expansion that will occur.

Geothermal earth loops are another system Siegenthaler felt was worth discussing. Since the early ‘80s, one of the schools of thought was that the high-density polyethylene pipe that is used for the earth loop would have enough elasticity that you didn’t need an expansion tank on that side of the system.

In the winter, the interior volume of the line shrinks at a higher rate than the shrinkage of the liquid, which will push the pressure up in the geothermal system. Usually, this isn’t a problem in a 40-50 psi system; however, if you don’t have any marginal fittings, you might get a leak.

In summary, anywhere you have a heat exchanger with two circuits, you need an expansion tank on either side of those closed-loop systems. In addition, when you have two closed-looped circuits and have anything that isolates them from each other, for example, a heat pump or a heat exchanger in a heat melt system, you should also have an expansion tank in both circuits. These two independent circuits will not communicate the fluid’s pressure, expansion, contraction, or expansion. <>