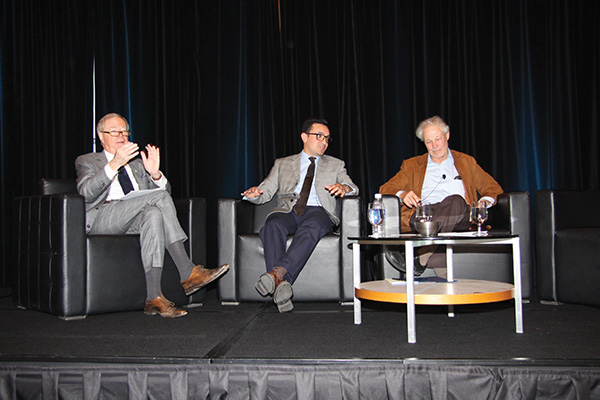 The CBoC was part of a panel session, “Propane’s Position in the Market: Where do we go from here?” Don Newman (left) hosted the panel, which included Carlos Murillo, senior research associate at the board (centre) and George Greene, founding chair of Stratos Inc. (right).

Canada’s propane industry is expected to grow by over 20 per cent between 2017 and 2025, according to a study commissioned by the Canadian Propane Association (CPA).
Results of the study, conducted by the Conference Board of Canada (CBoC) – a non-profit research organization – were presented at the CPA’s 2018 Leadership Summit, held June 6, 2018 in Ottawa, ON.

Per year, the industry is estimated to generate $4.4 billion in GDP, about 21,000 jobs and $1.1 billion in government revenue across the country, the study reported.
Population growth, primarily in Alberta and Ontario, is expected to drive residential propane demand. The study also reported increased use in the agriculture and transportation sectors.

The petrochemical industry and the industrial sector are Canada’s largest users of propane, followed by commercial and residential end-users, according to CBoC.

The organization also reported growth in propane use across health care facilities and educational institutions.

“Low-emission, clean-burning propane is a game changer for Canada,” CPA president and CEO Nathalie St-Pierre said at the summit. “Our panel sessions today confirmed that.”

Now a partner at Baker McKenzie law firm in Toronto, ON, MacKay encouraged attendees to deliver the CPA’s message of propane as a leading fuel for Canada directly to elected representatives in government.

In another session, president and CEO of Transition énergétique Québec Johanne Gélinas said that while hydro is meeting the company’s energy needs, there is room for propane in helping Quebec reduce its emissions.

Joanne Wilkinson, assistant deputy minister with Indigenous Services Canada, led a talk on the economic and environmental costs of burning oil and diesel. Wilkinson shared how the propane industry can engage with indigenous and remote communities.

Moving forward, the CPA views the use of online tools as a route to reposition propane in the minds of Canadians and the government.

CPA also announced the winners of its top industry awards at the summit, including its Lifetime Achievement Award and two new awards introduced this year, the Health and Safety Award and the Innovation Award. Winners included James Callow, president of Budget Propane in Gravenhurst, ON, UPS Canada and Otodata Wireless Data Network.

The Student Scholarship Award, funded annually by the International Association of Young Gassers, was presented to Emily Bestwick of Harrison Hot Springs, BC and Jessica Beltz of Landmark, MB.  www.propane.ca
www.conferenceboard.ca