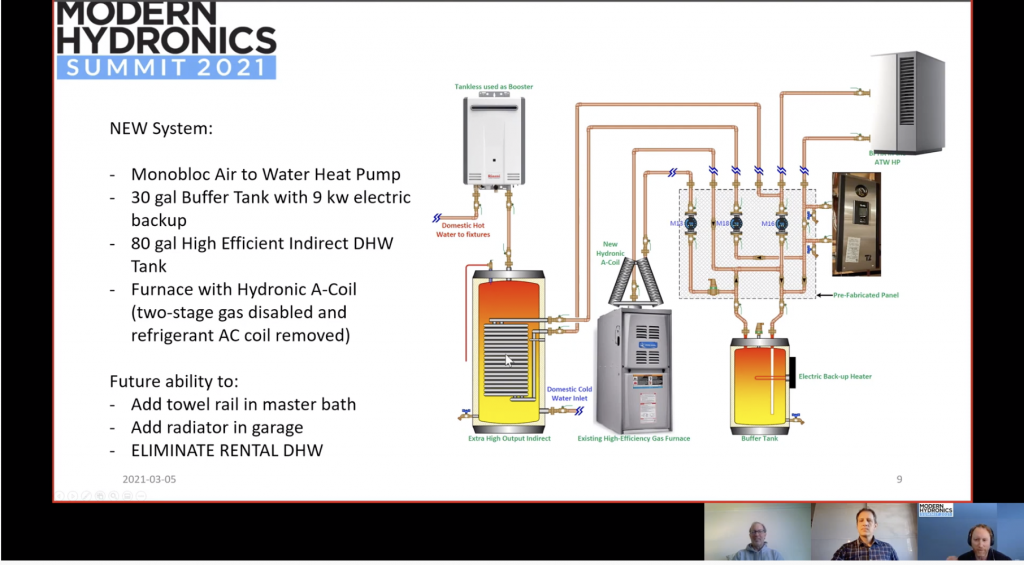 In this edition of 30 Mechanical Minutes HPAC magazine shared screens with Mike Miller, a regular HPAC contributor and vice president sales with Taco Canada, and Mark Strangways of The Hydronics Team, a design build mechanical firm in Toronto.

To begin, Miller addressed reasons for the growing interest in heat pump technology in Canada, citing how several regional jurisdictions are trying to move away from fossil-fuel heating and introducing incentives for home owners to invest in electric heat pump technologies. He also pointed to Europe where, in recent years, the industry has seen heat pump technology outselling fossil fuel equipment.

Miller then tackled the well-known limitation of air-to-water heat pumps providing thermal energy in colder temperatures. He acknowledged that the fluid temperature out of a heat pump is generally limited to 140F or below, and this temperature will begin to fall off as the outdoor air temperature gets colder requiring an auxiliary heat source to supplement the heating demand.

“But I want to highlight that there’s a lot of the time throughout the year in Canada where the heat pump alone can produce enough heating and cooling,” says Miller. And he also spoke about the advantages of heat pumps in relation to their high coefficient of performance (COP), where the ratio of energy required to produce thermal output well exceeds that of fossil fuel alternatives.

The conversation turned towards system design and installation. According to Strangways, the biggest difference is taking into account the lower water temperature. “If you’re using radiant in-floor, it’s already sized to utilize lower water temperature,” he noted. “But if you’re using forced air you have to ensure the coil that’s going to be used to exchange the heat has large enough surface area that it can produce enough Btus for heating, and to ensure that you’re able to remove the latent and sensible heat from the home for cooling.”

Miller and Strangways then shared details of an air-to-water heat pump installation they carried out at Miller’s own home. An existing gas furnace was maintained, but the furnace was modified, removing the DX coil and replacing it with a re-sized hydronic coil. He still uses the fan in the furnace and the existing ductwork as the distribution system.

The system design (see photo above) includes an electric boiler as a source for supplemental heating, a buffer tank, and an indirect tank for heating domestic hot water (DHW). A tankless water heater remains as a backup for additional heat if required, but it hasn’t run since the system was commissioned.

For DHW, the flow leads from the heat pump supply through the electric boiler, through a pump which services the indirect coil then returns back to the heat pump.

And another pump draws water from the buffer tank to the coil in the furnace to provide heating or cooling for the house.

“I’m absolutely thrilled by the technology,” says Miller. The biggest difference he’s noticed is that instead of scorched hot air coming out of the air vents it is now tempered air for both heating and cooling. “It’s not as cold, but it’s more consistent, so I find that it has added a lot of balance, and it also reduced my need to humidify in the winter because it doesn’t pull all the humidity out through the flames.”