I first wrote about heat pump water heaters (HPWH) almost a decade ago. At the time I was looking to highlight newer, innovative technologies and the HPWH seemed to qualify. After researching and writing that article I was impressed with the products available at the time. Even though I had never sold one I was hopeful that it would be just a matter of time before we would see demand begin to grow.

In fact, I wrote this in the conclusion: “With its impressive efficiency numbers and considering the growing appetite for all things green and efficient, HPWHs may just be an idea whose time has come. They have certainly opened my eyes to the potential of heat pump technology in general.”

In the years since that first article the already impressive efficiencies have improved significantly, with the typical Energy Factor (EF) rating rising from 2.5 to 3.5. (see below) The appetite for all things green and efficient has indeed continued to grow, as has the market for techie gizmos and gadgets. The newest generation of HPWHs have incorporated this also as many models now come with lots of cool bells and whistles such as Wifi connectivity and automatic leak detection.

Considering all of this you might be surprised to hear that I have still never sold a single one in the past decade. In speaking to some of the manufacturers I understand the HPWH market has seen some growth, and yet it is still it is a niche market at best, with most units being installed in net zero, or near net zero custom homes. 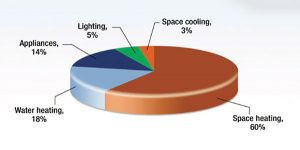 Distribution of residential energy use by end-use (per cent).

Most studies show that DHW production accounts for about 18 per cent of the average home’s energy usage. A HPWH could save a homeowner in the range of 10 per cent of their total energy bill. ENERGY STAR estimates that if every household in the U.S. were to install a HPWH the savings would top $8.2 billion annually; these are numbers that should not be ignored.

The closer I look at the newer generation HPWHs the more convinced I become that they should be a viable option, so why do we not see more of a demand? I think there are many reasons for this, many markets, including my own, are dominated by natural gas fired options. Gas fired tanks and tankless units offer much greater recovery rates than electric so I would not expect HPWHs to make inroads in these markets. Where electric tanks are dominant the biggest hurdle is cost, electric tanks are relatively inexpensive so the up charge to a HPWH is not insignificant. Still, using ENERGY STAR estimates, the payback should be three to five years and total lifespan savings would be $3,500 or better.

Another obstacle is the lack of any rebate incentives that are often needed to stimulate sales of this type of energy saving product. As far as I can see there are virtually no rebate incentives anywhere in Canada for HPWHs.

Rebates or no rebates, I still believe HPWHs have great potential, however it is a potential that may remain unrealized. Unfortunately, the saying “old habits die hard’ may be the main reason we fail to embrace changes such as this, even if they do have merit. Hopefully someone out there can seize the opportunity and prove me wrong and next time I revisit this topic I can report how HPWHs have taken over the electric water heating market. <>

COP is a measure of the energy output of a system in comparison with its electrical energy input. Standby losses and the interaction of changing water and air temperatures are not reflected in measurements of COP. Accordingly, the COP of a standard electric hot water heater is close to 1 and the COP of a typical HPWH heater may be 3 to 4. COPs quoted by manufacturers may reflect the combination of the production of cold air and hot water in relation to energy input. Energy factor (EF) is a more useful measure because it more accurately mimics real life or field conditions.

The test to determine EF is conducted over a 24-hour period with temperatures of incoming water and input air held constant. A measured amount of water is drawn from the system every other hour for the first 12 hours and no water is drawn for the final 12 hours. Because this test reflects standby losses, the EF of a typical electric hot water system is 0.90 and the EF of a typical HPWH heater may be 3.50. This represents an efficiency improvement of more than 300 per cent.

THE SCIENCE OF HPWHs

A heat pump water heater is much like a refrigerator turned on its head. The fridge is an insulated box where the heat is pumped from inside of the box and dumped outside the box, making the inside cold. With a HPWH we have an insulated tank full of water and the process is reversed. Heat is pumped from outside the tank inside the tank, thereby making the water inside warmer. This “pumping” of heat is achieved by taking advantage of a few basic laws of nature.

First of all, heat always moves to cold. Secondly, temperature and pressure are related. Pressurizing an element will result in an increase in temperature and conversely, depressurizing results in a corresponding decrease in temperature. Picture the can of compressed (pressurized) air we use to clean computer keyboards. Notice how the can gets colder as we release the air, decompressing the contents. Pressure also affects the boiling point and condensing point of elements.

At this point because it is hotter than its surroundings it releases the heat it absorbed earlier in the cycle. In an HPWH the hot coil, or condenser would of course be on the inside of the tank where we want to transfer the heat in order to make hot water.