NOT WHAT THEY USED TO BE
The “classic” heat pump for residential heating and cooling debuted in North America during the 1970s. Big name HVAC companies  developed markets for these early generation “air-to-air” heat pumps, which consisted of two major subassemblies: an outdoor condenser unit, and an indoor air handler. A refrigeration line set connected these subassemblies.
Although air-to-air heat pumps have been around for several decades, early generation products were not able to maintain reasonably efficient operation at low outdoor air temperatures. It was not uncommon to turn off those early generation heat pumps when outdoor temperatures dropped to or below 20F. However, advances in refrigeration technology, including inverter drive variable speed compressors, and a process known as enhanced vapour injection (EVI) now allow air-source heat pumps to operate at very low outdoor temperatures, typically down to -13F (-25C).
Some of the largest global providers of heating and cooling hardware, now offer “cold climate” versions of air-to-air heat pumps. The most common configuration is called a ductless mini-split heat pump system. A single outdoor unit connects to multiple indoor wall mounted cassettes, each supplied by its own refrigeration line set. Each indoor unit can operate independently, allowing for zoning.
Although cold climate ductless mini-split heat pumps have carved out a nice market share over the last decade, they rely on forced air delivery of heating and cooling. As such they do not offer the potential to combine their high thermal efficiencies with the comfort provided by a well-designed hydronic distribution system. Furthermore, most ductless mini-split heat pump systems only provide space heating and cooling and lack the ability to supply ancillary loads such as domestic water heating, or pool/spa heating.

WATER RATHER THAN AIR
This is where a different heat pump configuration becomes attractive. An air-to-water heat pump uses the same concept as an air-to-air heat pump for extracting low temperature heat from outdoor air. The difference is that it delivers heat at very useful temperatures into a stream of water (rather than air) passing through its condenser.
Some air-to-water heat pumps are capable of producing leaving water temperatures of 130F+, even with relatively cold outdoor air. This sets the table for use of hydronic heat emitters such as radiant floors, radiant walls and radiant ceiling panels, panel radiators, fan-coil convectors, and even contemporary low temperature fin-tube baseboard. It also allows the heat pump system to be configured to provide most, if not all of the energy needed for domestic water heating. With a suitable heat exchanger, heated water from an air-to-water heat pump can also be used to heat a swimming pool or maintain the water temperature in a spa.

A WHAT?
Although most North American heating professionals are familiar with ductless mini-split heat pumps, as well as geothermal heat pumps, few of them are familiar with air-to-water heat pumps.
This is not the case in other markets such as Asia and Europe. According to the August 2015 issue of the Japanese publication JARN, the 2014 global market for air-to-water heat pumps totaled over 1.7 million units. The Chinese market alone represented almost one million units sold in 2014. The European market was 232000 units, with France as the number one market, followed by Germany and the U.K. The same Asian-based firms that sell ductless mini-split heat pumps in North America produced many of these air-to-water heat pumps. Others came from European-based companies. The U.S. market was a tiny fraction of global sales.
Why such a difference? One likely reason is the small market for residential hydronics in the U.S. and Canada relative to Asian and European markets. Another is the very limited use of chilled water cooling in smaller North American buildings. Manufacturers also have to consider the cost of supporting a new product line in a market (such as North America) that requires a lot of “hand holding” before the installations become routine.

SUB-ZERO
A modified vapour-compression refrigeration system has been developed to further improve the heating capacity and coefficient of performance (COP) of air-to-water heat pumps operating in low outdoor air temperature conditions. This technique, known as enhanced vapour injection, (EVI), uses another heat exchanger placed between the outlet of the condenser, and the inlet of the thermal expansion valve, as shown in Figure 1. 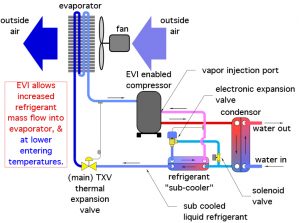 This additional heat exchanger is called a “sub-cooler.” It reduces the temperature of liquid refrigerant leaving the condenser, allowing for even lower temperatures when that refrigerant passes through the main thermal expansion valve and on into the evaporator. It does this by directing a portion of the liquid refrigerant through an electronically controlled thermal expansion valve, which causes the refrigerant to vaporize and extract more heat from the remainder of the liquid refrigerant flowing through the other side of the sub-cooler.
The vaporized refrigerant leaving the upper side of the sub-cooler flows back to a special port on the compressor and is injected at an intermediate port between the scrolls. The net effects of EVI are increased compression ratio in the compressor, and cooler refrigerant entering the evaporator. Both of these effects reduce the drop in heating capacity and COP at low ambient temperatures. Figures 2 and 3 show the heating capacity and COP ratings for one EVI-enabled air-to-water heat pump currently available in North America. 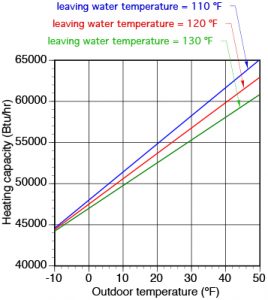 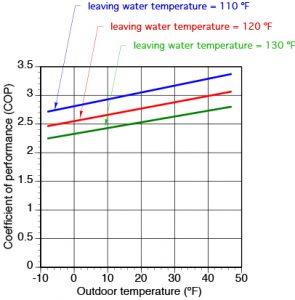 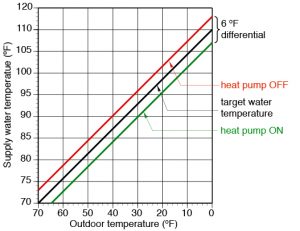 PUTTING IT TOGETHER
Figure 5 shows a system designed to supply space heating and most of the domestic hot water load using a low ambient air-to-water heat pump.
The heat pump is connected to a relatively short piping circuit filled with an antifreeze solution. In heating mode, the heated antifreeze solution passes through the brazed plate heat exchanger, which has been sized so that the water temperature leaving the heat exchanger is not more than 5F lower than the temperature of the antifreeze solution coming from the heat pump. Because the heat pump circuit is an isolated closed loop, it must be equipped with a pressure relief valve, expansion tank, air separator, fill/purging valves and a suitably sized circulator.
The heated water flows to the short header at the upper left side of the buffer tank. If one or more of the heat emitters is active, some of this water passes to the homerun distribution system. The rest flows into the buffer tank.
The outdoor reset controller monitors the temperature of the sensor at the mid-height of the tank, and operates the heat pump, regardless of any space heating load. The latter is necessary, because the buffer tank is also being used to preheat domestic water using the assembly seen at the right of the tank.
The water temperature in the buffer is usually below the required delivery temperature for domestic hot water. Thus, a thermostatically-controlled electric tankless water heater receives the preheated water from the heat exchanger and provides the necessary temperature boost. 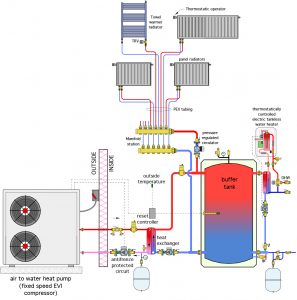 There are many more ways in which low ambient air-to-water heat pumps can be worked into complementary hydronic systems. For example, the system shown in Figure 5 could be expanded to include single or multiple zone chilled water cooling. It could also be adapted to provide pool heating at times when space heating or cooling is not required.