J&R Mechanical in Yellowknife has been installing biomass boilers for over 12 years. (all photos courtesy J&R Mechanical)

As more communities become aware of the benefits of using biomass to heat and power their buildings, more district energy systems are coming online in Canada. Remote northern areas in particular have recognized the opportunity to use bioenergy to reduce their reliance on fossil fuels and lower their greenhouse gas (GHG) emissions.

J&R Mechanical, a plumbing and heating contractor in Yellowknife, NWT, is one of the companies leading the charge. Last year the company began operating a new $1.1-million district energy system, called the Woolgar District Heating System, to provide heat to a government of NWT (GNWT) warehouse and three other private businesses, helping to reduce the government’s reliance on fossil fuels. 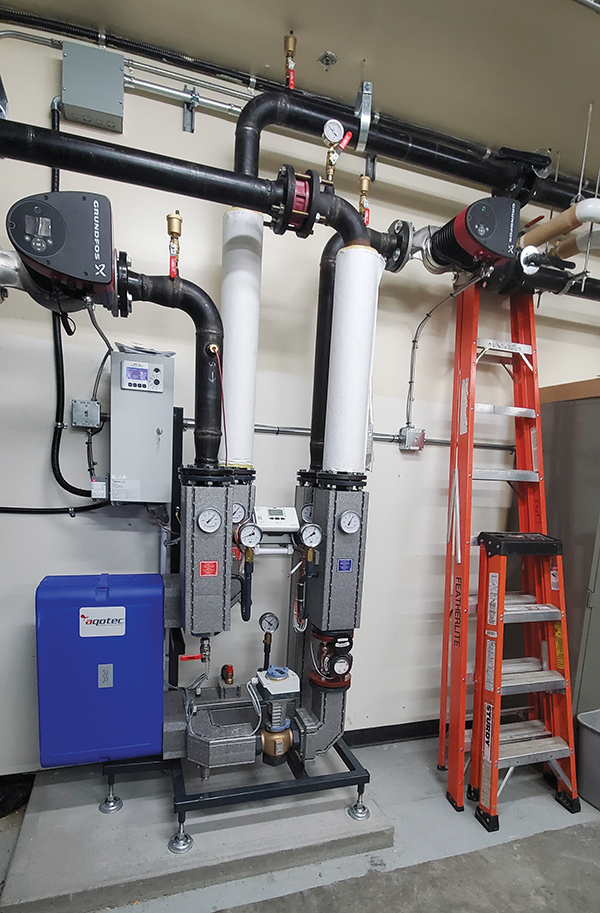 This 200-kW heat transfer station at the GNWT warehouse in Yellowknife allows J&R Mechanical to meter the heat for billing clients. It also provides a hydraulic disconnect between the client building heating system and the central district heating system.

This is not the first time that J&R Mechanical has installed a district energy system. According to owner Ken Miller, the company, which was founded in 1977, has been installing biomass boilers for over 12 years. When these types of boilers started becoming popular in the NWT, the territorial government embraced the potential environmental benefits of using wood pellets instead of fossil fuels.

Consequently, “Our government contracts were specifying installations with biomass – in schools predominantly, at first – and that’s how we got involved in biomass,” Miller says. “In the years after that, when tenders would come out for different systems, we focused on that as part of our regular scope of plumbing and heating. The heating became biomass, and we became a prominent installer of biomass boilers for the government and the private sector.”

Around the same time, J&R Mechanical began installing district heating systems for different government clients. Their first system was for an Indigenous government client in Behchokò, NWT, installing a plant that provides heat to eight buildings from one biomass boiler.

“As we continued to do more and more of those, we had this opportunity to propose a project that was literally right in our backyard – the Woolgar District Heating System – and the main client is the GNWT warehouse,” Milller says. “They have a list of buildings they wanted to switch to biomass, and this one was on their list.”

The territorial government agreed to their proposal to switch the warehouse over to a district heating system. J&R Mechanical also approached other businesses in the area that could benefit from the system, which led to 30% of the block coming on board.

The project took two years from proposing the idea to completion, including the planning and design, permits and installation.

“You can only dig in the summer here, so we started the project too late to get everything – the permits and all of that – on time in the previous summer (2019),” he explains. “Even into the construction season, in the summer of 2020, we were delayed because of permits. We didn’t have everything in place. So, it took us into the winter, which caused some issues for us and left us with some seasonal deficiencies.”

But, the system officially came online in March 2021, and has since been providing heat to the three businesses, the GNWT warehouse and a GNWT data centre that is connected to the warehouse.

The entire containerized mechanical room was shipped to J&R (seen here with the pellet-feeding silo beside it). J&R received the container as is and made all of the connections on site. The system can also be fired on wood chips with some modifications.

From wood pellets to heat 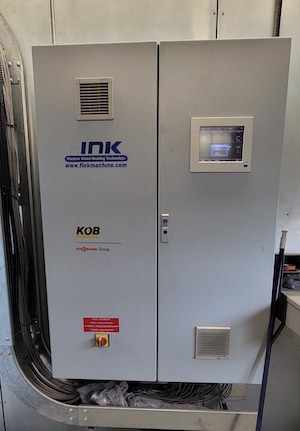 The system itself is fairly simple, with two main components: a shipping container housing a 1330 MBH (390-kW) Viessmann Vitoflex 300-UF boiler and a silo to store the wood pellets.

Fink Machine of Enderby, B.C., the supplier, assembled the boiler in the containerized plant, which was then shipped to J&R Mechanical, who installed it and connected it to their own systems. Meanwhile, the wood pellets came from a pellet plant in Alberta.

According to Miller, the system is very similar to any other hydronic heating system: “You heat water and you transfer the heat to buildings through various different types of heat exchangers, leading to various heat emitters including baseboard radiation or unit heaters, radiant in-floor heaters or radiant panel heating.

“The process of burning wood pellets to create the heat source is the only real difference,” he continues. “We unload and load them, redistribute them to different silos in the community where these pellets are then extracted by augers or different devices to feed the boiler, based on the demand for heat.” 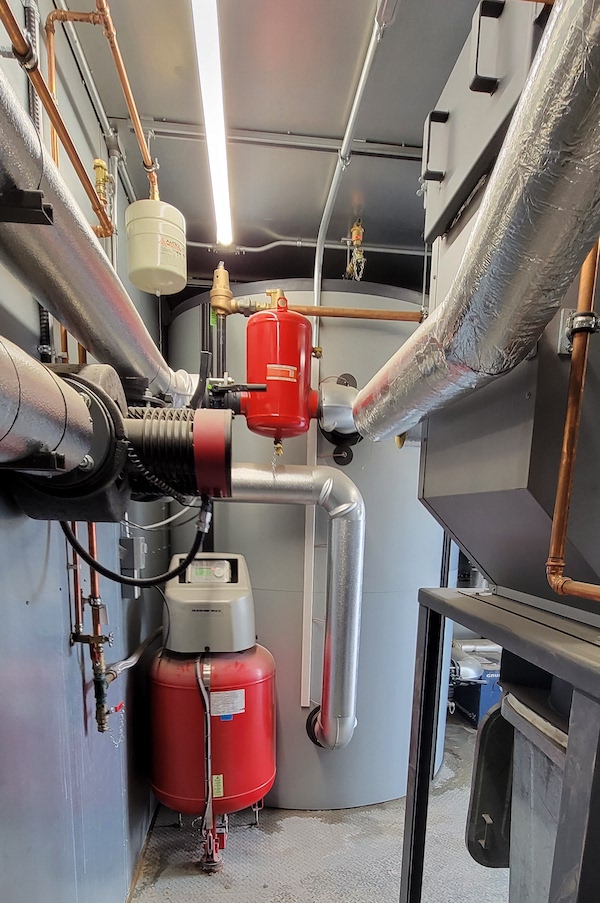 On the near left is the boiler pump sending heat to the 4000 L buffer tank with a shot of the expansion tank below. Also in this photo are the safety relief valves and air purge devices, etc.

The boiler produces heat, water vapour, carbon dioxide and ash. The heat from the water vapour is transferred to each building’s space heating system through underground pipes, Miller explains.

Yellowknife, of course, is extremely cold in the winter, which means the system has to be able to operate in a harsh climate. So far, there have been no issues with the boiler, Miller says.

“The average design temperature here is to -45C; we’ve seen the boiler operate just perfectly in those temperatures,” he says. “It’s operating as it was designed to operate, with low maintenance and fairly high efficiencies. It’s worked out well.”

The project, which cost $1.1 million, was a big capital investment for J&R Mechanical. The NWT government gave the contracting business a $274,000 grant for the project, but the company footed the rest of the bill. However, Miller says their business plan calls for paying off that investment in four to five years of operations. 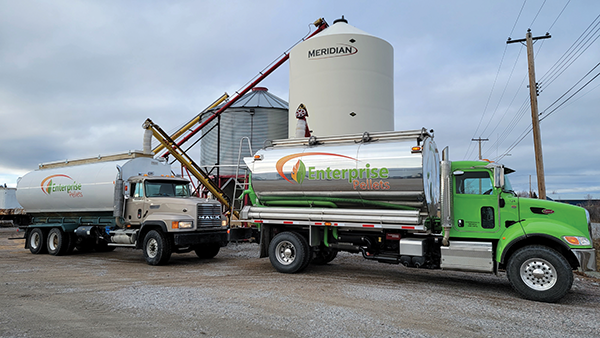 J&R Mechanical established Enterprise Pellets in 2009 to supply, install and maintain biomass boiler systems for residential and commercial heating applications in the area. The company distributes pellets to silos in the community.

So far, the feedback from the community and the territorial government has been very positive, Miller says. He believes there are opportunities for other northern communities to develop similar district energy systems using wood-burning boilers to reduce their reliance on fossil fuels.

“I think everyone is looking at them as a better solution – looking at biomass boilers to heat buildings – so I think it has been kind of proven that this is a good way to go,” he says.

Nevertheless, there are a few barriers to overcome when installing a system like this. One such challenge is understanding the potential impact on a community’s infrastructure.

“We bury pipes in the ground, and that can be very disruptive,” Miller explains. “There’s other stuff in the ground that you don’t see – power lines, water and sewer pipes, telephone lines and things like that, depending on where you’re trying to install it. So, engineering design can be a big challenge.”

However, the benefits far outweigh the costs, and J&R Mechanical is looking at possibly expanding the Woolgar District Heating System.

“If our client base grows – and it potentially will with some new developments next year or the year after – we possibly will have to expand the size of the heating plant to accommodate,” he says.

For now, though, the company is already planning to add one or two more buildings to the system and continue running it as is.