Rachel Hesketh is spearheading a youth committee within her union (UA-Local 67). 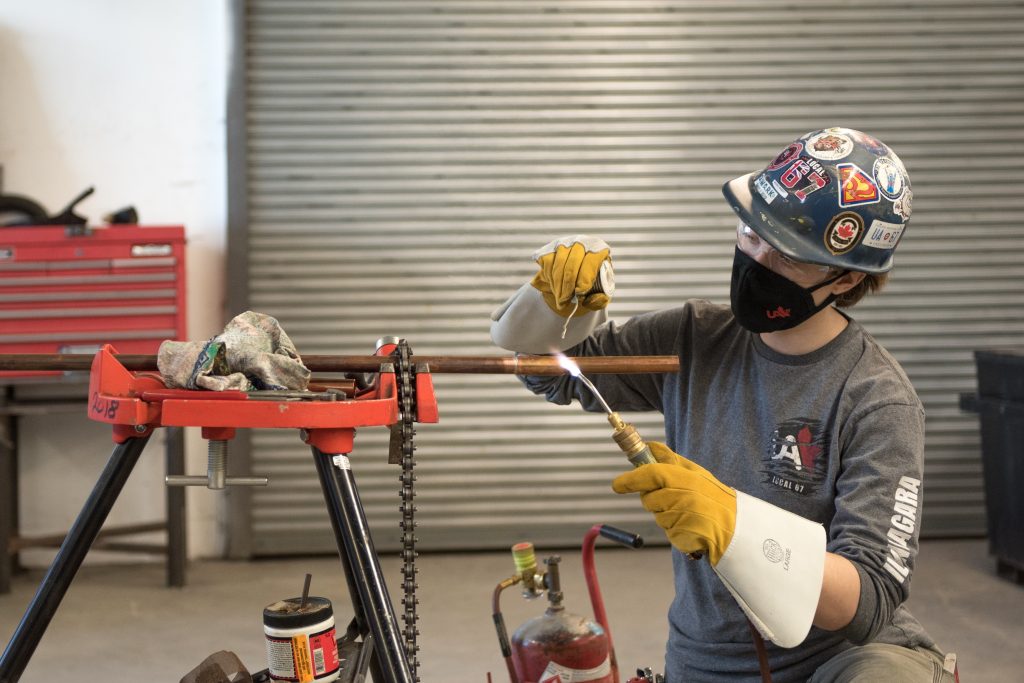 In May the Canadian Apprenticeship Forum released the Apprentice Demand in Red Seal Trades report which estimates that 163,785 new journeypersons will be required from 2021 to 2025 in order to sustain workforce certification levels across 56 Red Seal trades in Canada. To meet that anticipated demand, the country will need a total of 375,026 apprentices over the next five years.

Filling the gap requires getting more youth interested in the trades and specifically attracting more women. One initiative, being led by CAF, is called Support Women in Trades (SWiT), a national strategy with a goal of increasing the proportion of women across all trades to 15% by 2030, up from a baseline of 4.5% recorded in 2018.

Plumbing and HVAC/R remain typically male-dominated, and while change and support is being encouraged from industry organizations, some individuals are also leading from within. Rachel Hesketh, a 29-year-old plumbing journeyperson, recently completed her five-year training program, and now the Hamilton resident is spearheading a youth committee within her union (UA-Local 67) to engage young women to get excited and participate in the skilled trades. We spoke with Hesketh to gain perspective on her journey so far.

What led you to get into this industry?

Before this I was on the path of becoming an early childhood educator, so the change in paths happened quite quickly. I came across a pre-apprenticeship program that aimed to get women into the trades with UA-LOCAL 67. At the end of the program, we had an opportunity for a job placement, and if all went well you received an opportunity to join the union. So it provided me with a lot of drive and motivation to succeed.

What inspired you to make this your career?

Through the grind of my pre-apprenticeship program I realized the joy I would get from making this into a real-time career. Seeing progress with yourself was the biggest thing for me.

Every day is different, you learn as the days and weeks go on. It’s super encouraging to come onto a job site and instantly know a solution and be able to help others who need you in certain situations.

What led to the launch of the youth committee?

It came through my volunteering. I was a part of other committees and saw what was possible. I noticed the interest in getting more women in trades, so I thought it was important to take advantage of it and create the committee called Evolve.

Evolve is a committee of youth members to encourage people under 35 to participate in helping forward their careers and help young people express their questions about their own union and the benefits involved. 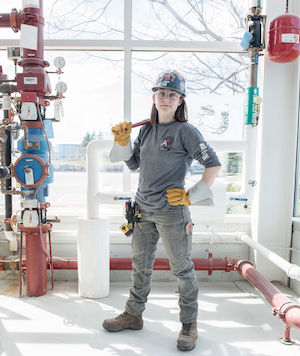 What goals are you trying to achieve as a woman in trades?

Being visible and making people know that we’re there. This past week [on a jobsite there were] three women working, and I was shocked in happiness. But three really isn’t enough, and if we can continue to show we’re happy to be there that number should only grow.

I have had some challenges along the way, but I am grateful, and it’s always good having people to support you. Being the only girl on a job site several times; it’s hard to feel like you belong.

But as time goes on, we’re seeing more and more women so it makes you feel reassured.

What are the obstacles in getting more women and youth into mechanical contracting?

Raising our visibility and overcoming the common stigma of going to university instead of going into trades. You can go to school for years, or you can go work in a trade, do a five-year pre-apprenticeship program and make money along the way.

How do you feel about your career choice today?

I love it. You can drive down a road and see a building you worked on and point it out and feel proud about the work you did.

What’s your advice to young people?

If you have an opportunity to do a pre-apprenticeship program, do it, because you will have the chance to see if you really like it. There are numerous network opportunities you can take part in and take advantage of union courses. Don’t be afraid of how long apprenticeship programs take because it will be worth it in due time.