Rimouski, a city of about 50,000 in eastern Quebec, has long been passionate about local sports and athletic development. The city is home to the Rimouski Océanic, a junior ice hockey team in the Quebec Major Junior Hockey league, and boasts two major post-secondary institutions with their own sports teams.

The $40-million Desjardins Sports Complex (Complexe sportif Desjardins), which opened in early 2019, is important to the local community with its swimming facilities, plus two ice rinks.

Consortium H20 Architecture created a design that blends into the urban fabric of the surrounding community and conforms to the topography of the site, which slopes down north to south. The two pools are showcased through a large glass wall for a modern and inviting look. 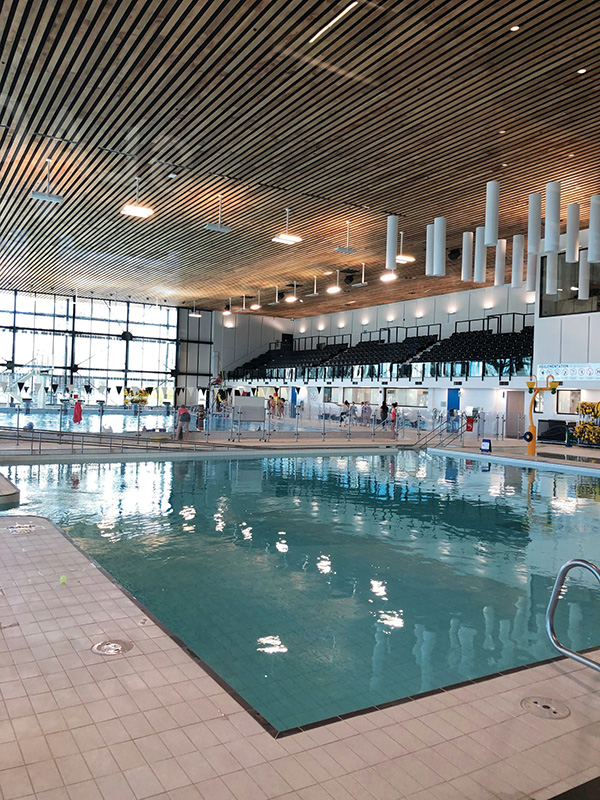 The LEED Gold design will generate significant energy savings throughout the life of the facility. Contributing some of these savings is the dehumidifier, which controls the space conditions of the pool environment. Using technologies such as heat recovery and purge-economizer, it provides serious payback in reduced energy demand throughout the year and contributes to the facility’s overall LEED credits.

Dehumidification is central to any indoor pool. Without a good system in place, the space would be so stiflingly hot and humid it would be unbearable to use. While dehumidifiers have high energy requirements, they can incorporate several key features to reduce their demand while recycling some energy for the benefit of the facility.

Take, for example, the pool water heating. Pools are constantly losing heat through evaporation and must be continuously heated to make up for this. This takes a lot of energy — it is not uncommon for large facilities like the Desjardins complex to spend hundreds of thousands a year on heating the pool water alone.

The pool water heater can run any time the compressor is in operation. Given the size of the two pools and the fact they will always present a dehumidification load (even when not in use, evaporation from a pool is significant), that will certainly be much of the year. As a result, the Desjardins complex will not need to run auxiliary pool water heating as often, resulting in energy savings.

Given the climate in Rimouski the dehumidifier is equipped with purge-economizer mode so it can automatically turn its compressors off at times when the outdoor air alone can control the indoor conditions, without the need for mechanical dehumidification. Even if only used for a few dozen hours a year, this feature can typically pay for itself in about 12 months.

Given the cold temperatures through some parts of the year, outside windows, walls and doors dropping below the space dew point and forming condensation is always a concern. Not only does it look unsightly, but condensation on surfaces can promote corrosion and mould.

While a high-performance dehumidifier is critical to preventing condensation in an indoor pool, it relies on a good air distribution system in order to do its work. Stantec created a network of ducting that delivers the airflow exactly where it is needed. Surfaces where condensation could form, like windows, are covered. As well, the breathing zone — the area where patrons are — gets its share of fresh airflow to ensure there are no stagnant zones. The team even put their design accent on the ductwork, by integrating it with the cedar wood ceiling. 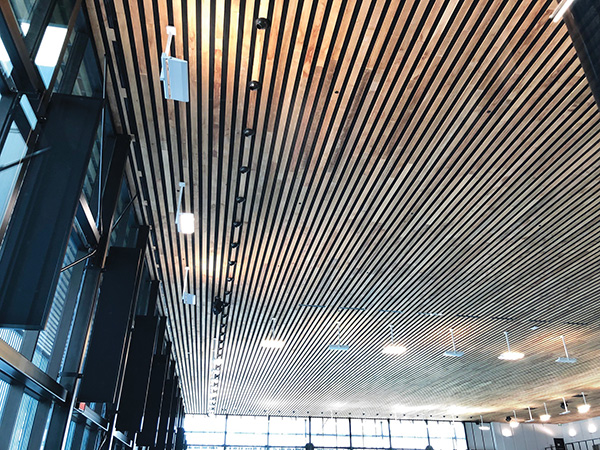 Exhaust air intakes were also strategically placed in the facility to source-capture harmful chemicals coming off the water surface, so they can be expelled outside the building before having the chance to diffuse throughout the space.

Bringing this facility to Rimouski was a public effort in every way. Construction began in 2017, with funding from the City of Rimouski, Province of Quebec and the Government of Canada, plus a $4-million contribution from the local office of the Desjardins credit union. It was built on land contributed by the University of Quebec in Rimouski.

Thanks to the collaborative effort by three levels of government, plus other community stakeholders, citizens of Rimouski are now the stewards and users of a one-of-a-kind athletics facility.
Editor’s note: This project was one of nine in the region funded in part by the New Building Canada Fund, Small Communities Fund–Provincial—Territorial Infrastructure Component.

Ralph Kittler, P.E., has had more than two decades of experience in indoor pool design and dehumidification. Currently the vice president of sales national accounts for dehumidified air solutions (DAS), he was formerly the vice president of sales and marketing for Seresco, a dehumidifier company he co-founded, which is now a division of DAS. As an ASHRAE Distinguished Lecturer, he was the reviser responsible for Chapter 25 (“Mechanical Dehumidifiers and Related Equipment”) in ASHRAE’s 2012 Systems and Equipment Handbook.