Regular HPAC writer and hydronics industry expert John Seigenthaler joined editor Doug Picklyk to share his insights into the best practices for ‘staple-up’ radiant floor heating systems, and first off, Seigenthaler explained that a staple-up floor heating system essentially consists of tubing and often aluminum plates which are stapled to the underside of a subfloor.

Siegenthaler warned against the use of plateless staple-ups, and he strongly recommends the tube and plate floor heating system where tubes and stamped or extruded aluminum plates are installed below or above the subfloor. The tubing is installed into a groove in the plate which is then fixed onto the sub floor. For above floor applications, plywood strips or ‘sleepers’ are also attached. In both cases a variety of floor coverings can be used on top, including ceramic tile, engineered hardwood or a low pile carpet. 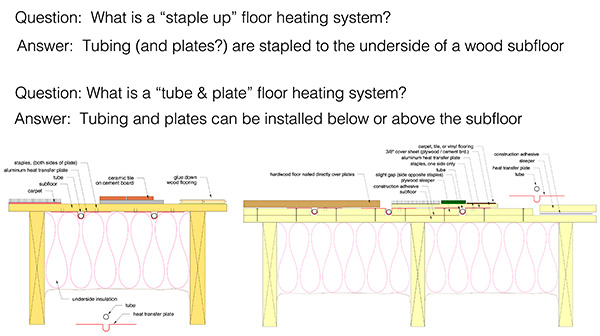 With this diagram Siegenthaler differentiates between staple-up and tube-and-plate floor heating systems.

As far as tubing material goes, Seigenthaler recommends PEX-AL-PEX, also called Aluminum PEX. “The reason for that is because the aluminum core in that tube is going to have an expansion coefficient that’s roughly the same as the plates, so we don’t get a lot of differential movement between the tubing and the plate as they change temperature.”

He adds that standard PEX can work, but that tubing can expand up to 10-times as much as an aluminum plate for the same temperature change, so it sets up the possibility of more expansion/contraction issues and possible ticking sounds in the floor.

As for best practices when installing this type of heating system, Seigenthaler said the plates should be manufactured and precisely formed to fit the shape of the tubing, and they should be fixed tightly to the subfloor.

There should also be six inches of fiberglass insulation fitted tight against the plate system for the underfloor application, and the whole system should be wrapped underneath to prevent pieces of fibreglass falling from the insulation to the ground below.

Along with well executed applications, Seigenthaler shared photo examples of less-than-perfect installations using non-manufactured plates crudely hammered into shape, and another using only the tubing which he described as ‘thermally constipated,’ meaning the tubing would struggle to transfer heat without the plates.

Some contractors cut costs by going down the plateless route, and while this might save on materials and labour costs the water temperature would need to be increased. The increased fuel consumption and operating costs would soon negate the initial savings and potentially damage the finished floor above.

Conversely, he suggested the optimum practice is to thread the tubing through the floor to the farthest joist bay and then work your way back. Ensure you don’t make any tight bends in the tubing which could pinch or crimp and cause a blockage. The aluminum plates should be placed eight inches on centre and ensure the return bends on the tubes don’t butt up near a band joist as this could be a freezing hazard. 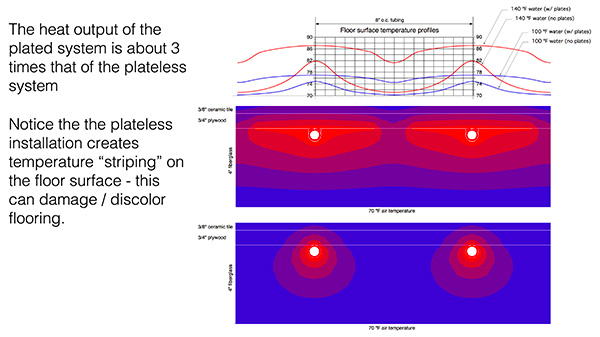 Siegenthaler shared this modeling of the difference between using or not using heat plates.

The heat output of the plated system is three times that of a plateless system, noted Siegenthaler, and he illustrated this with a slide showing a thermal image of a cross section of the two opposing designs (see image above). He pointed out the plateless installation could create temperature ‘striping’ on the finished floor surface.

“The purpose of the plates is to pull heat from the tube and spread it across the floor,” said Seigenthaler. “With ‘thermal constipation’ (plateless), the heat does not spread across the floor. It’s important to utilize the lateral heat disbursement and use these plates.”

Does the formation of the metal make a difference? Seigenthaler said he tested this himself by using two different types of plates. He used the same amount of metal but made one plate half as wide but twice as thick. In a test, results showed the thinner plate had a higher performance by about 20%.

View the entire video session, including a question and answer session, here.