Approaches for dealing with the challenges of hot and heavy weather systems in central and eastern Canada. 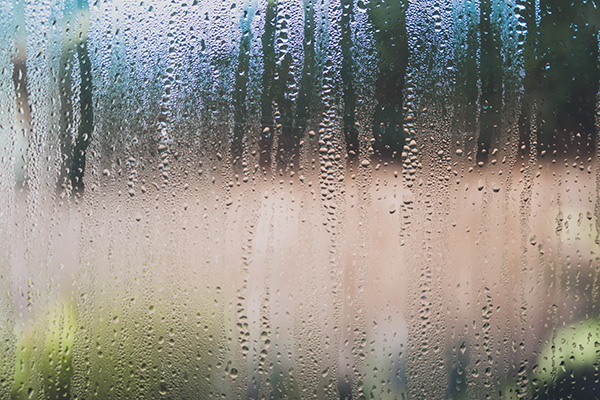 As a kid, I never noticed how bothersome hot and humid weather would become in southern Ontario during our glorious summers. I was too focused on enjoying those days.

Years later, I learned about the number of days and hours a specific area would experience different temperatures throughout the year. For example, in a document created by Lennox and published in the 1986 version of the Air Conditioning Contractors of America (ACCA) Manual J, the Greater Toronto Area (GTA) can expect to experience an average of 709 hours (30 days, roughly) at or above 75F (24C). By comparison, Miami, Florida has an average of 5,273 hours at or above 75F. Nothing about humidity though.

Well, we’ve all heard of oil, gas, water, sewage and steam pipelines, but what about a humidity pipeline? Well, there is a particular weather phenomenon that occurs regularly during our summers in much of eastern Canada. Weather observers talk about a “pipeline” that opens between the Gulf of Mexico and southern Ontario through to southern Quebec and points east.

The pipeline encourages a flow of incredibly hot and humid air, typically relegated to the Southern U.S., up the Mississippi and Ohio River valleys to the lee of the Appalachian Mountains and into our region.

Often lasting for several days and periodically opening and closing the flow of moisture almost anytime from June to late August, the moist air pushes the so-called humidex readings beyond 105F (40C) in some areas causing health problems and generalized misery for many people who’ve long since turned to cooling systems for relief. When moisture condenses on the outside of the windows, that’s a pipeline day. 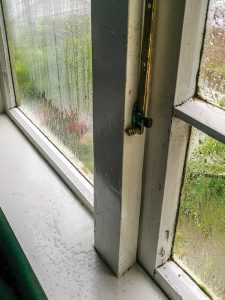 I once spent some time in New Orleans during July where I learned from the locals that only tourists visited the beautiful parks during the summer. I saw a mobile home with a 5-ton packaged unit installed into a large window opening; it’s so hot that shipyard welders started their day shift at 3:00 a.m. going home at noon to avoid the worst of daytime heat; some people slept outside when the cooling system goes down. This kind of extreme weather, visited upon unsuspecting Canadians, is truly behind our robust cooling industry in eastern Canada.

Someone once said, “moderation in everything.” Scientists and HVAC engineers have determined, especially considering Covid-19, that maintaining a consistent level of moisture in the air inside buildings helps to prevent some health problems. Keeping the level of humidity within the home somewhere between 35% to 50% should be the gold standard for moisture control.

Too much moisture damages buildings, creates ideal conditions for bacteria and viruses, and allows dust mites colonies to multiply, while too little moisture is equally hospitable to potential pathogenic organisms.

Out of control moisture levels within the home (leaving thermal comfort aside for a moment) creates ideal conditions for the growth of dangerous mold, often in places the average homeowner doesn’t realize even exist.

Sometimes, a minor renovation will expose a world of fungi happily doing their thing, as can be seen in Figure 2 below. 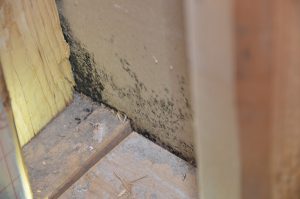 In our northern climate, maintaining an appropriate level of humidity during the winter months is one thing, but rarely do summertime moisture levels in the home warrant much discussion beyond the old standard complaint: “It’s not the heat, it’s the humidity.”

The curious thing is that eastern Canada, affected by the “pipeline,” does have a humid climate. Engineers classify humid climates as having an average dew point of 56F (13.3C) or higher.

Ottawa, often described as the coldest capital city in the world, also possesses an average dew point in July of 59F (15C) (source: timeanddate.com/weather/canada/ottawa/climate), and when the “pipeline” gets going the dew point can exceed 70F (21C) for days at a time.

We have learned so much about how buildings function throughout the years, especially how to reduce energy consumption while maintaining a healthy indoor environment. Yet, there are more than 4 million homes in Ontario alone that were built without deference to energy performance and ventilation.

I think it’s safe to say that many of those houses have been retrofitted with new windows, doors, furnaces and cooling equipment over the years, but too often the cookie cutter recipe used for HVAC systems continued the use of the original cookie cutter.

However haphazardly the retrofits were made over the years, studies have shown that HVAC systems are too often oversized!

Moisture Has a Source

Visible sources of moisture are easily recognized as liquid water leaking into the building from roofs, windows, doors, and faulty drainage from sinks, tubs, showers and so on. I’m talking about the invisible sources that cooling systems typically are not designed to deal with.

Sources of moisture, such as vapour diffusion, are difficult to find and not always easily explained to homeowners. Many sources in the house include: cooking, bathing, hot tubbing, indoor gardening, toilet seats left up, plus the added potential sources from the mechanical system such as constant fan operation in cooling season, oversized cooling systems and leaking ductwork complicate the matter too.

Basements rarely ever require mechanical cooling, unless some heat producing process is going on down there, because the ground temperature is such that heat will flow from the basement into the cooler ground all year. But what about water vapour? Water vapour can diffuse thorough solid materials or simply barge in through open doors and windows whenever there is a difference between the indoor and outdoor dew point.

Suppose a cooling system can maintain a sensible temperature of 75F (24C) at 50% RH; plot those conditions on a psychometric chart and find the dew point will be a reasonably comfortable 55F (13C).

On a hot “pipeline” day (say 70F (21C) dewpoint), an older, leaky house with its cooling system working overtime is a candidate for an invasion of moisture by convection through gaps, holes, open doors, etc., and by vapour diffusion.

Whether the house is new or old, an accurate load calculation will ensure the proper equipment will be specified for any job. The goal of any HVAC system must be to transfer heat as efficiency as possible, yet numerous studies consistently show mechanical system flaws lead to poor performance, lack of humidity control and higher than anticipated electricity consumption.

Combined with lack of maintenance, too many systems are wasting precious energy resources.

The most common mechanical problems in the millions of older “pipeline area” houses, especially if they’ve been haphazardly renovated, almost need no introduction: 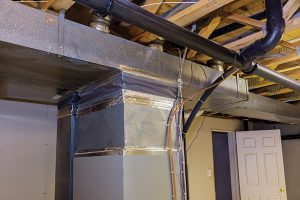 What Can Be Done?

Fortunately, for many of us, we don’t have a summer climate anything like the southern U.S.

Miami has a July dew point of 73.4F (23C)—the type of conditions those in eastern Canada only experience when the pipeline is flowing in full force.

Even though our residential cooling equipment might run thousands of fewer hours than our mechanical colleagues down south, it is nevertheless vital that our cooling systems match the sensible load as closely as possible.

And we do know that controlling humidity has everything to do with human comfort along with reducing embryonic outbreaks of pathogenic organisms and reducing potential property damage caused by unwelcome moisture incursion.

So many of the four million or more homes (in Ontario alone) have second-rate air handling systems, it might be better to abandon the existing forced warm air duct system altogether. Without proper airflow, equipment run time is compromised so that providing effective cooling and humidity control is impossible.

In such cases, I think a cold climate heat pump using floor mounted terminal units (or a combination of wall and floor mounted units) would provide superior cooling and humidity control along with efficient heating.

Older houses are inherently inefficient because there is too great a temperature difference between the inhabitant’s skin temperature and the temperature of surrounding infrastructure such as walls, doors and windows. For the average consumer looking for a low-cost cooling unit installation, it’s not likely they’ll be interested in spending more money on building envelope improvements.

HVAC sales professionals must consider offering strategies to maintain a suitable relative humidity in the house during the cooling season, however, depending on the condition of the house, when a human needs analysis combined with all the necessary industry parameters are included in the kitchen table quote, the cost perspective may be daunting to some consumers.

Workarounds may be possible, but the “we’ve always done it this way” approach isn’t helpful.

Here are some strategies to consider:

With the advent of smart thermostats capable of monitoring and reacting to humidity levels, I think it’s best to provide a system that will efficiently keep an older “pipeline” house at 74F and 50% RH.

We know that longer run times (not too cold), less moisture coming in from outside, less indoor moisture generation, and simple things like keeping the doors closed and windows shaded on pipeline days makes for effective cooling, but in the end our customers will do what they will.

When the annual humidity pipeline opens yet again, let’s make sure they’re ready.

Ian McTeer is an HVAC consultant with over 35 years of experience. He was most recently a field rep for Trane Canada DSO. He is a refrigeration mechanic and Class 1 Gas technician. Ian can be reached at imcteer@outlook.com.