Taking a step back to explore how we got here and what may lie ahead. 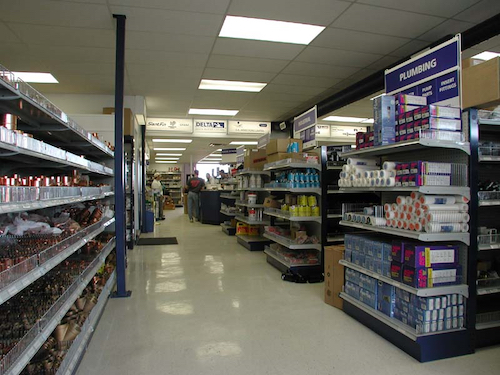 This well stocked self service area of a typical wholesale supply house contains all the items contractors need every day. Ultimately, this photo describes much of what it takes to keep Canada’s infrastructure in top condition. (photo: Ian McTeer)

HVAC wholesale suppliers, for as long as I can remember, featured well-stocked shelves, informative product displays, friendly and knowledgeable staff, and rarely would anyone leave a wholesaler without the item he or she came to purchase.

Yes, the odd time a part would be out of stock generating a backorder, and sometimes even longer than expected lead times for vital replacement parts would happen as well, often stretching ancient loyalties to the breaking point. That being said, it’s not always about the cost of goods that motivate contractors to deal with one or more wholesalers. Going the extra mile, finding a way to solve a backorder, suggesting alternative products, technical assistance, prompt deliveries and more, these are supply chain activities so important to our industry and ultimately our customers.

It Comes from Somewhere

I could argue that a global supply chain connecting the world is a good thing. Others might say the loss of jobs and disruption to Canada’s manufacturing industry has taken too big a toll on workers. This is not the proper forum to discuss such a topic, however, regardless of where something is made, some parts or components will necessarily have to come from somewhere else.

Thus, the dictionary defines it this way: “a supply chain is a system of organizations, people, activities, information and resources involved in supplying a product or service to a consumer. Supply chain activities involve the transformation of natural resources, raw materials, and components into a finished product then delivered to the end customer.”

How even one of the copper fittings like those on the shelf in the photo above gets from a mine in South America to the shelf in that particular store is a journey of incredible complexity encompassing dozens of manufacturing steps, transportation by ocean, air and truck, not to mention human handling and processing every step of the way. The availability of all those goods is a tribute to human ingenuity, something I often simply took for granted.

What the Heck is Going On?

I am certain this story is well known by everyone—since we’ve all lived it—but a brief synopsis might help to explain where we are and where we might be going from here.

In late 2019 a flu pandemic hit the entire world, something like the Spanish Flu pandemic of 1918 although not as deadly. Rightly or wrongly, many governments across the globe decided to lockdown their economies, a move originally conceived to be a two-week effort to “flatten the curve,” thus preventing an out-of-control uptick of new flu cases that might overwhelm each nation’s healthcare infrastructure.

Many workers were furloughed, laid off, or sent to work from home. With governments chipping in by offering extended unemployment benefits and other financial supports, those at home decided to start spending money on just about everything, from electronics to home renovations.

One of the first commodities to feel the pinch was pressure treated lumber, as many new decks and other outdoor improvement projects quickly emptied lumber yards. High prices for limited lumber inventories have even persisted to this day.

Once vaccines became available and lockdowns were lifted in many places, both the U.S. and Canadian economies started to recover. People continued buying things, all sorts of things, large numbers of these things coming from abroad, especially from China, Vietnam, Thailand and India.

Many HVAC contractors reported sales in 2020 and the first half of 2021 to be their best ever. Yet, at the same time, expanding equipment and service sales in the HVAC industry, normally a good thing, created untold levels of stress and frustration for contractors, their employees and customers alike. Just like Alice mused while in Wonderland: “It would be so nice if something made sense for a change.”

Data from the Heating, Refrigeration and Air Conditioning Institute of Canada (HRAI) showing shipments into the Canadian HVAC supply chain as of the third quarter, October 2021, suggests there’s a buying frenzy going on forcing wholesalers to stock up. I can’t remember such a boom in residential air conditioning shipments at 132% over the previous year and ductless split systems were up 62%.

Regardless of what robots can do for various industries (and it’s a lot), plenty of humans must also participate at every link in the complex supply chain, too. Businesses large and small, looking to get back to work, found themselves unable to attract laid-off workers back into the fold or even attract new employees—even with higher wages and better benefits.

Figures from the U.S. last July show that more than 11 million jobs remained unfilled. Vaccine mandates haven’t helped, with many workers refusing to take the “jab.”

Once again, states and provinces resurrected lockdown procedures of varying degrees as the Delta and then Omicron variants worked their way through the population. Industries deemed to be essential continue to operate, however, staff shortages (lockdown or not) take a toll on productivity.

It seems every industry is calling out for new or replacement staff. Personnel shortages in our industry have been around well before COVID came along, but the demand for staff including installers, technicians, managers, system designers, equipment salespeople, distribution and warehousing material handlers is becoming more acute every day.

Should any of the components used in products like a heat pump become unavailable, the manufacturer might be able to source alternate components from elsewhere. Sometimes, missing items could be sub-assemblies built by another company and shipped to the main assembly plant on a just in time (JIT) basis.

Sub-assemblies will often be things like pre-made wiring harnesses with plugs and connectors attached or entire component electrical boxes.

Even one missing component or sub-assembly can shut down an assembly line. Manufacturing methods pioneered by the Japanese decades ago saw major North American manufacturers adopting the principle of JIT instead of warehousing parts and pieces meant for the assembly line. A considerable amount of Canada’s warehouse space exists in truck trailers on the move over our highways at any given time. 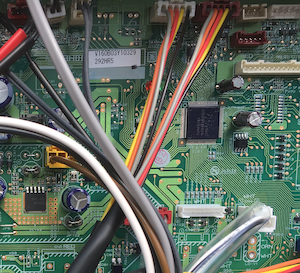 The almighty chip: HVAC equipment might have only one microprocessor on board or many more, especially the higher-end products where communicating controls, gas heat modulation, inverter compressor drives, variable speed motors, and electronic refrigerant metering are involved. (photo: Ian McTeer)

An integral part of many modern HVAC products, the almighty microprocessor brain (or chip), has been one of the most difficult components to source since the early days of the pandemic. Several fires at Renesas Electronics in Japan, the worst one in March 2021, created a huge gap in the microprocessor component supply chain.

The chip shortage won’t last forever, in the meantime, our industry will continue to negotiate with chip suppliers for short-term relief. Electronics giant Intel announced plans to build two new semiconductor plants in Arizona recently, but it will be many months before these factories will be able to put product out the door.

Goods must get to market, and HVAC contractors need to get those goods. Items coming from afar, such as electronic components, sub-assemblies, accessories and finished units haven’t, until recently, faced transportation and distribution hang-ups such as the likes we’re seeing now:

The shortage of workers, regardless of industry, makes all the other problems seem small by comparison. Grounded aircraft, short of pilots, will increase delivery delays and exacerbate shortages—a major news headline on December 16th, 2021 cited United Airlines in the U.S. was grounding 100 of its jets because of a pilot shortage.

And once our industry does manage to recover, there’s still bad news related to the cost of goods. Government policies targeting massive infrastructure improvements and other social engineering projects will drive the cost of steel and copper through the proverbial roof.

For example, electric cars (much favoured by policymakers) require almost four-times as much copper than a standard internal combustion engine vehicle (see graph above). Steel prices, averaging just under $500 per ton in July, are projected to hit $1,900 per ton next year. HVAC equipment prices have only one way to go.

Wholesalers continue to receive shipments of HVAC parts and pieces, and some are publishing photos on social media of well stocked warehouses hoping to assure customers that needed items are available.

I went to Gary McCreadie’s HVAC Know It All website where I asked Gary, along with several of his technician subscribers, how the supply chain disruption manifests itself in the field. Gary told me he’s “seeing long wait times for various things, but it’s equipment that seems to be scarce.” Apparently certain rooftop units won’t be available until sometime in 2022.

Obviously, our magnificently robust supply chain is suffering from a pandemic-related weak link syndrome. Even though some wholesalers have significantly embellished their inventories, it’s the odd missing item here and there holding up the entire enterprise; replenishing some scarce items will be met by new shortages of others.

Our industry is in limp mode for now. Decades of beneficial experience in dealing with scarcities along with bouts of inflation, government regulation, foreign competition and perpetual staffing issues will have to serve us well in the coming year of spot shortages confounded by rising prices. From where I sit today (and I don’t pretend to be a sage), I’m thinking we’re in a situation akin to Winston Churchill’s famous quote after the Battle of Britain victory: “This is not the end. It is not even the beginning of the end. But it is, perhaps, the end of the beginning.”

Certainly, we are not in dire straits as the Brits were then, it simply means our industry will have to rely on our “beneficial experiences” or lessons learned from the past in dealing with shortages of everything. I’m not optimistic, at least in the short run.

Thus, as I’ve mentioned, it’s going to be lessons learned from the past along with contemporaneous “outside the box” thinking that will have to carry our industry through this seemingly unrelenting crisis. <>

Ian McTeer, a regular contributor to HPAC, is an HVAC consultant with over 35 years of experience in the industry. He was most recently a field rep for Trane Canada DSO. McTeer is a refrigeration mechanic and Class 1 Gas technician. For more information Ian can be reached at: imcteer@outlook.com.