In Which I Go ccASHP!

Our intrepid HVAC writer chronicles his own journey towards air source heat pump acceptance and installation. 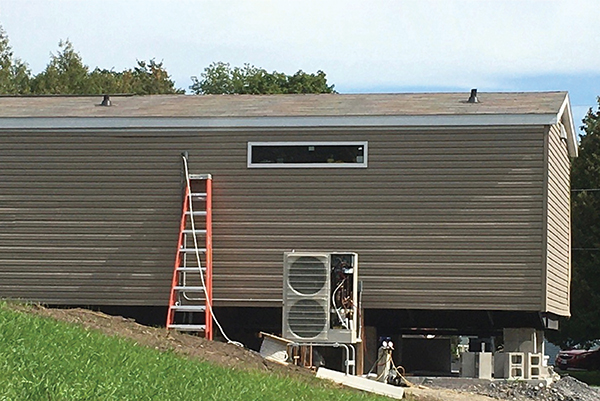 I have written extensively about heat pumps, both air source and ground source, over the years.

The ability of heat pumps to output several times more useful heating watts compared to wattage consumed has held my attention for decades.

However, some units do it better than others.

I examined air source heat pumps used in residential applications going back to the late 1970’s. These early units were never meant for cold climates, having inadequate defrost controls, ridiculously high balance points, compressor protection was limited to nonexistent, and they were too often installed in combination with second-rate air handling systems.

ASHPs imported to Canada continue to be tested and rated for Climate Region IV. Thus, an ASHP with a Region IV Heating Season Performance Factor (HSPF) of 9.0 would have to be derated by 15% for Region V, the 9.0 HSPF unit becomes a 7.8 unit in most of Canada.

Even so, later model ASHP’s continued to be plagued by defrost problems that contribute to less efficient energy utilization by returning heat meticulously squeezed from frigid outdoor air back outside to defrost an iced-up outdoor coil.

Additionally, during defrost, furnace heat would be utilized to temper air being delivered by a system now in cooling mode.

Properly installed and commissioned with a focus on shielding the outdoor unit from prevailing winds, defrost periods could be shortened dramatically, often to less than five minutes.

Some control boards would allow several defrost periods of up to 15 minutes to accumulate before signaling a fault code that might not be intercepted until the next maintenance call.

Faulty defrosting, whether installation related or by mechanical fault, cause ASHP’s to gobble energy.

Systems trying for defrost a third time after two consecutive 15 minute defrost periods should shut down, bring on backup heat, and signal the homeowner to call for service, so I say. 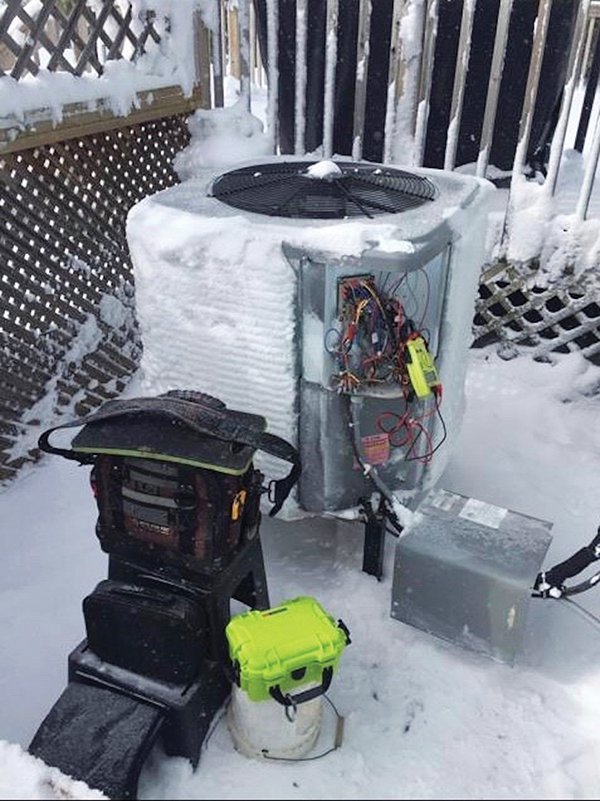 Figure 1 (above) illustrates the extent of a frozen outdoor coil. Perhaps wind-driven snow overwhelmed the unit’s ability to defrost itself, maybe the defrost control board failed, or a coil sensor failed.

Whatever the cause, it’s going to be a frosty no heat call for this HVAC technician.

It’s worth noting that ground source heat pumps have no need to defrost themselves, as the entire outdoor component is buried below the ground out of the way of raging winds, freezing rain, and knee-deep snowfalls.

Despite my reservations about plopping a refrigeration coil outside in freezing cold weather with a potentially wonky defrosting system, I’m now on board with the latest technology used with cold climate air source heat pumps (ccASHP).

In my own situation, costs related to the equipment and installation of a ground source heat pump are still beyond my budget; had I been able to rent the ground component from a third party as once proposed by a large utility, I think I’d be doing ground source today.

But when it came time to move into a smaller house, we decided to avoid the condominium route and settled instead to purchase a mobile (or manufactured) house and have it installed on a concrete pad. I’m now located in a spacious senior’s mobile park in eastern Ontario, not too far from the Quebec border.

So why would I choose a ccASHP when I’m aware of potentially suffering from one or more of their long-standing shortcomings?

Just like anything else, major technological improvements, such as more robust inverter-driven compressors utilizing dense vapour injection combined with microelectronic controls better managing defrost cycles, give me the confidence that a properly installed, expertly commissioned and well maintained ccASHP will give me the comfort and efficiency I’m looking for.

This time I’m the homeowner, and I’m the one in the driver’s seat, right?

After all, I have the gold, therefore I make the rules.

That might be the way some homeowners perceive relationships with various contractors ought to be, after all, it wasn’t that many years ago when some homes had “tradesman’s entrances” usually around back so the folks inside wouldn’t have to see the scruffy blue-collar workers whilst sipping their tea.

Times have changed so dramatically that yesterday’s notion of simply looking around for the best deal is not the prime driver of the buying decision.

“What should I buy?” and “Who should do the work?” were the top-of-mind questions for me.

No one wants to pay any more than necessary; hence, getting a “proper deal” is more like it.

For the first time in my life, I’ve had to shop around for several contractors needed to service my manufactured house.

Searching ads on the Internet and those posted in the local newspaper, I still took the time to gather references from my community.

I’m happy to say that the local contractors I hired have performed as expected. But I’m still waiting for other work around the home to be done as everyone is incredibly busy and some materials are scarce.

My focus on contractor reliability and professionalism means that I’m not necessarily brand focused.

I know every brand has suffered from “issues,” some more than others, however, it’s how the problems were dealt with that counts.

I had the luxury of selecting an HVAC contractor having decades of experience with both air source and ground source heat pumps, including Mitsubishi products. 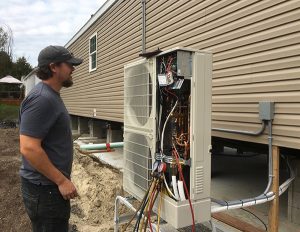 ATEL Air headquartered in Williamsburg, Ont. serves my area of eastern Ontario. My relationship with ATEL Air began when the owner, Jimmie Thom, decided to take on the Trane gas furnace and air conditioner product line in the early 2000’s.

I became a technical asset for ATEL and provided installation and service training along with telephone support for ATEL technicians over the years.

Admittedly, homeowners looking for a quality HVAC experience must rely on their research and testimonials to make the buying decision. I had a much easier time of it this go around.

Out With the Old 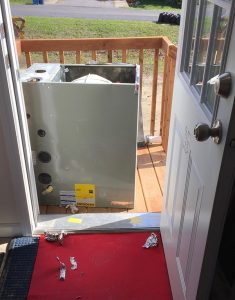 Good bye to this gas furnace.

The “old” in this case was a single stage downflow high efficiency gas furnace provided by the mobile home manufacturer, and it was in rather rough shape after the bumpy trip to Ontario from Nappanee, Indiana.

The installation involved a considerable amount of electrical wiring, both high voltage and control voltage. 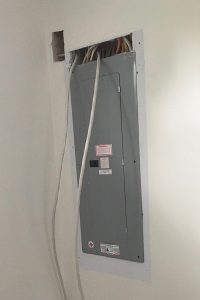 The 200-amp electrical panel, mounted upside down and completely encased in the stud wall with drywall all around, required some careful treatment (see Figure 2).

Minor cuts into the drywall exposed a new route for the heavier wiring running to the air handler and outdoor unit.

The new indoor air handler fit neatly into its closet application (Figure 3). I’m not thrilled by the “free delivery” return air system (Figure 4) as designed by the mobile house manufacturer, but there’s no option for return ducting in such close quarters and it seems to work well enough through the extra-large grilles fitted to the utility room doors, so I’ll put that objection aside, at least for now.

I could conceivably run a duct through the utility area and pick-up some return air near the ceiling in the dining room area if necessary. Let’s wait and see if I do that!

My brand new Ecobee smart thermostat delivered my September Energy Report; already. The system operated in cooling mode just 15 hours; turns out my average setting of 23.5C saved me 16% in operating costs had I chosen a lower cooling set point of 22C.

Now for the best part, I’m in the bottom 50% of energy users compared to other Ecobee thermostat users. Obviously, I’m too sexy for my heat pump.

With the current concern about carbon pollution and climate change, governments continue to look for ways to reduce CO2 emissions, meaning natural gas, propane, fuel oil and wood-burning heating appliances have fallen into disfavour amongst the regulatory set.

Yet, switching many more households over to electric heat pump systems must also coincide with significant improvements to the North American electrical grid, including massive new sources of power generation. 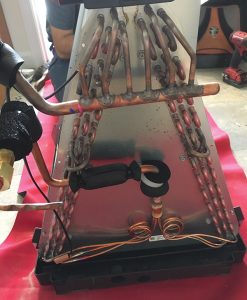 Surface area, one of the secrets of higher efficiency everything, translates into a giant indoor coil obscuring the view of installer/technician Matt Dillabough as he prepares it for service in a downflow application.

As I write, the Independent Electricity System Operator of Ontario (IESO) is reporting the province-wide hourly load at 12,905 MW with nuclear plants providing 68% of the demand, wind at 15%.

With only nine years to go, I doubt we’ll see renewables take the lead in power generation by 2030.

I asked Greg Millard, service manager at ATEL Air, if his customers (existing and new) are asking for quotes on ground source or air source heat pumps.

His reply: “Yes, especially in areas where oil or LP (liquid propane) are the only alternatives.” 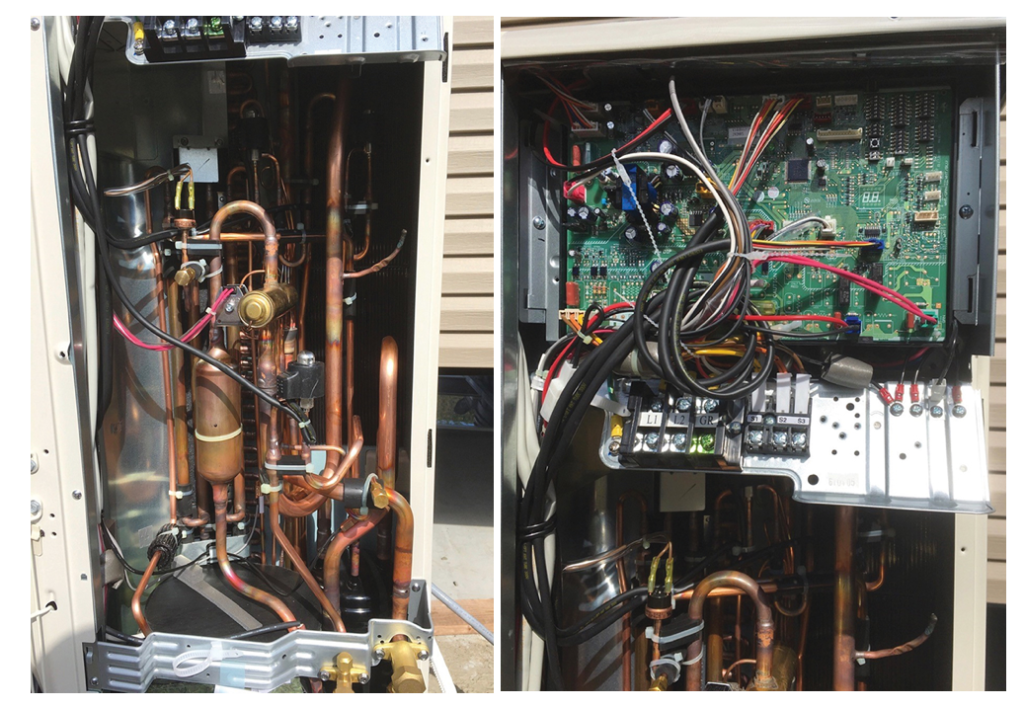 Sophistication—not your grandmother’s idea of a heat pump—these are views inside the outdoor unit.

At the same time, he is not currently discouraging fossil fuels, “but we do educate the customer about the alternatives, especially when LP and oil are the other options.”

Millard tells me his customers still want tried and true gas furnaces and air conditioners, as they continue to be perceived as the most affordable option when it comes down to costs related to installation, operation and maintenance.

With current supply chain issues, the very near future could be of the greatest concern to residential HVAC contractors. There may well be plenty of work in hand, however, Jimmie Thom, president of ATEL Air told me, “We spend a lot of time verifying equipment is available and expected shipping dates for sold jobs.”

Thom is concerned that some gas furnaces are in short supply, or out of stock, going into the heating season, and major replacement parts such as heat exchangers have longer lead times, weeks instead of days as in the past. Millard said they’ve had to do some “brand hopping when needed and using a wider range of suppliers for material—basically buy it when and where it is available.”

To date, my ccASHP has been performing brilliantly. I’m using the thermostat’s automatic mode in which the cooling setpoint at 23.5C allows for some cooling and dehumidification on sultry autumn days. Heating setpoint at 21C allows the equipment to take the chill off early in the day as winter gets set to arrive any time now. Will modern cold climate and ground source heat pumps eventually rule the day? I think so. <>

Ian McTeer is an HVAC consultant with 35 years of experience in the industry. He was most recently a field rep for Trane Canada DSO. McTeer is a refrigeration mechanic and Class 1 Gas technician.