Everything including kitchen sinks and faucets 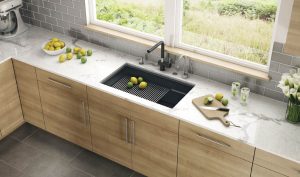 Granite farmhouse sink from Franke is indicative of the trend to an industrial look in residential kitchens.

Out with the ornate and in with the industrial, or at least this holds true when it comes to modern trends in kitchen design. Exposed wooden beams, exposed brick and exposed pipes are in – a tribute to the 19th and early 20th century kitchen. Though this trend in kitchen appliances reflects a revolutionary period in history, their design also incorporates modern commercial qualities, which combine to form unique products that appeal to consumers for a number of reasons.
The industrial design trend has been working its way into the modern kitchen since the 1980s. Kelly Morisseau, a Certified Master Kitchen and Bath Designer and Certified Interior Designer based out of California, explains that industrial style appliances, such as faucets and sinks, actually belong to a broader design trend known as steampunk.
“It [steampunk] was meant to cover a range of alternate history stories that asked, ‘what would happen if steam had become the dominant energy source instead of electricity in the Edwardian/Victorian age?’” notes Morisseau.
Similarly, Jamie Gold, National Kitchen and Bath Association (NKBA) certified designer and author, explains that steampunk is modernism paired with eclectic, antique-inspirations. Gold says steampunk was created from interpretations of fantasy and science fiction literature and, of course, elements from the industrial revolution.
“What we are seeing today is a trend we call mainstream industrial. You look up, you see exposed air ducts and older looking fan blades. It’s an attempt to make, say a restaurant or home, look like an old converted loft or factory,” says Adam Findlay, senior marketing manager for Pfister. “This is something that has caught on, and you can see it in lighting in particular. People are using Edison bulbs and old lamps. But the goal is to capture this [trend] in a faucet.”
Use of rustic brass fittings, simple exposed joints, distressed finishes and even black colouring are ways manufacturers are visually aging appliances.
Mainstream industrial style faucets and sinks can add antique character to any kitchen space, but Morisseau believes that industrial steampunk design may have a deeper significance than what meets the eye.
“There’s a return to the 1880 to 1900 design aesthetic now with subway tiles, which signified cleanliness and proper sanitation back when the dangers of unrefrigerated items and lack of sanitary practices could make eating dinner somewhat dangerous,” contends Morisseau. By implementing clean design characteristics that originated at the turn of the century, homeowners are also evoking a sense of hygienic safety in the kitchen space.
Charlotte Sprague, marketing supervisor at Franke Kindred Canada Limited notes that while the industrial trend is, “to some degree a nod to mid-century design with clean lines, unfettered spaces and streamlined efficiency,” there is another influence. She explains that we must also look to the evolving commercial industrial kitchen appliances to better understand what is prompting this change within the residential space.
Similar to Morisseau’s theory, Glen Peloso, partner and designer at Peloso Alexander Interiors, believes that the commercial industrial faucet design exudes safety, which offers further explanation as to why homeowners are drawn to this design. “The spring details of the faucet and the larger single bowl sink, that is slightly deeper, allow you to spray clean dishes before [putting them in] the dishwasher – providing extra sanitary safety.” Peloso adds that users can focus faucet spray on the food that is being cleaned because of the spring pull-down feature that many industrial style faucets offer. This reduces splashing and thus the spread of germs.
Residential kitchen sinks are also shifting to offer an industrial design. “Think about deep sink basins with integrated ledges to turn the sink into a food prep area,” says Sprague.
“Straight walled bowls with huge capacity, in-the-bowl sink accessories to turn your sink into an entertaining hub, materials with superior hygienic properties and dual spray faucets,” she adds, detailing the commercial features that are quickly cascading into the residential kitchen.
Aside from antique decoration and safety, there may be another element that is encouraging consumers to purchase these appliances. Peloso thinks that the Food Network on television may be behind this trend, as it takes viewers inside many industrial kitchens and has increased the average person’s connection to gourmet foods and wines. He believes this has enhanced the homeowner’s desire to be a “serious chef” and has encouraged them to purchase the latest industrial appliances.
These elements all together may help to explain the surging demand for industrial style faucets that Brad Campeau, sales manager for Masco Canada, has been observing. “Commercial and industrial aesthetic is very strong right now,” he said. “Industrial style kitchen faucets are more of a recent consumer facing offering for us, but it stems from years of listening and understanding the direction of the market, and developing products that not only meet the form, but function as well,” says Campeau.
Whether the cause for industrial popularity is due to the urban lifestyle of young professionals who reside in “turn-of-the-century industrial buildings,” as Morisseau suggests; an enthusiasm for high quality products driven by a desire for safety; the exposure to these elements through television cooking programs – or most likely, a combination of these influences – this trend is on the upswing for modern kitchen faucet and fixture design.